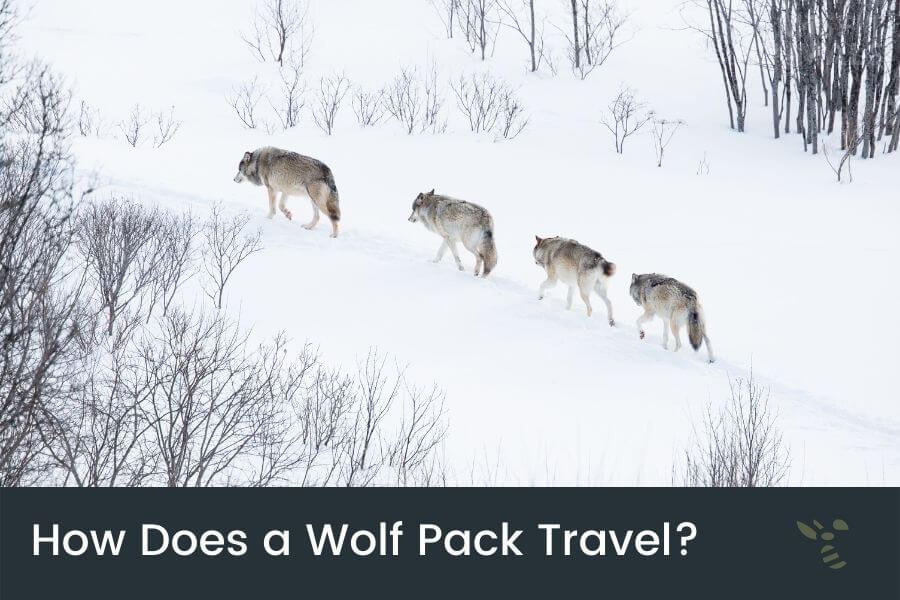 Wolves can travel long distances every day, sometimes up to 40 miles. A strong wolf will lead the pack, and they will look for food while they’re traveling.

Wolves are an incredible species. They’re known for their pack mentality, as well as great hunting abilities.

What you may not know is, that wolves have incredible stamina as well.

Traveling from territory to territory is important for the survival of wolves, as they need to find prey. In this article, we’ll discuss how a wolf pack travels together.

How Does a Wolf Pack Travel?

When wolves travel, they often walk in single file formation, especially in winter. They do so to conserve energy, as well as to protect the weaker wolves.

Wolves are incredibly social animals and typically travel in packs.

A pack is usually made up of an alpha pair (the dominant male and female) and their offspring, but can also include other adult wolves.

The pack travels together and walks in a single file line to save energy. This is especially important in the winter, or wherever there’s snow.

The pack is typically led by the strongest wolves, who are known as alphas. Meanwhile, the weak and old wolves tend to stay in the middle of the pack for protection.

A wolf pack travels by walking single file most of the time rather than being spread out. By doing this, they conserve energy.

When it’s very snowy outside, wolves spend extra energy climbing through the snow. If they were fanning out, every single wolf would have to do that. By walking in a line, only one wolf has to carve through the snow.

Who Leads the Wolf Pack?

The alpha wolf is typically the one who leads the pack. The alpha male decides where the pack will go, and the rest will follow.

The alpha is usually followed by some of the strongest wolves, while the weak and old stay in the middle for protection.

It’s important to understand, that the alpha wolf may not be the strongest wolf, but instead the one with the most experience.

The Old and Weak Wolves Stay In the Middle

As the pack travels together and walks in a single file line, the weakest and oldest wolves can stay in the middle for protection.

Some sources say that the old ones walk in the front, to make sure they don’t fall behind. This is incorrect. Instead, they walk in the middle, or towards the back.

It conserves energy for all of them to move as one instead of trying to split up or having lagging members.

Related: What happens to old wolves in the pack?

Why Do the Dominant Wolves Lead the Pack?

The Alpha wolf, or the dominant wolf, leads the back because he has plenty of energy, and is strong enough to carve a path.

A pack of wolves travels in a single file line. This is how they conserve energy and pick up on new scents along the way without losing their current location.

The dominant wolves will typically stay toward the front, where they can carve a path for the rest of the pack to follow.

It also allows for the strong wolves to easily split off if they spot prey animals ahead.

Do the Oldest Wolves Lead the Pack?

No, the oldest wolves do not lead the pack. At one point, there was an image circulating the internet, where someone has mislabeled a traveling wolf pack. The description sounded as follows:

“A wolf pack. The first three are the old or sick. They give the pace to the entire pack. If it was the other way round, they would be left behind, losing contact with the pack. In the case of an ambush, they would be sacrificed.”

This is simply incorrect.

Why Do Wolves Travel in Single File?

Traveling through snowy or otherwise obstructed terrain can be difficult. Hence, by allowing only a single wolf to carve a path for the rest of the pack, they can conserve energy.

The pack travels as a whole, as one single unit[1]. They typically walk in a straight line with the alpha males and females leading the group at the front of their formation.

Traveling in a single file line has a few advantages:

First, traveling this way is energy efficient. A single wolf will carve a path, whereafter the rest will follow. This also ensures they don’t get split up, as well as that they all travel in the same direction.

With stronger wolves at each end of the pack, the weak and old wolves are protected in the middle.

Lastly, sometimes wolves pick up a scent of animals, dead animals, or other wolves, which they need to investigate. They can easily split apart from the group and do exactly that.

How Far Do Wolves Travel a Day?

The average wolf can cover 30 miles, while others can travel up to 40 miles in a single day.

Wolves travel as a pack to save energy [2]. They will walk in a single file line with the strongest wolves leading and protecting their weaker members.

The average wolf can cover about 30 miles per day, but this does depend on the terrain and how much food is available for them along the way.

Wolves tend to be nocturnal which means they are most active at night. They may also travel during the day if they have a long way to travel.

How Far Do Wolves Travel a Year?

Wolves travel an average of about 4,500 miles a year. This does depend on the terrain, as well as how much food is available in that specific season [3].

Wolves typically walk around 30 miles per day, but this can vary depending on their surroundings.

How Is the Leader of the Pack Found?

Many people believe the leader to be the strongest wolf. This is not true, as the leader of a wolf pack is primarily determined by whoever’s mating.

The leader of a wolf pack is called an alpha wolf. While wolves don’t actually have alpha wolves in the traditional sense, there’s still a leader.

Dave Mech was responsible for making the term “Alpha” wolf popular in this article.

The leading wolf is more accurately described as the “breeding male”. The leader is simply the one who’s actively breeding. Typically, this is also an older and more experienced wolf.

Do Leaders Travel on Their Own?

No, the leader does not travel on their own. The alpha will lead a group of wolves in a single line to save energy and make it easier for them to protect each other from threats such as predators or hunters.

Other members of the pack that include developing young females with pups may be found mixed throughout the line.

When wolves travel, they travel with the pack. They’ll travel in a single file line, where stronger wolves will stay toward the front, and weaker wolves stay toward the middle. This ensures energy-efficient traveling, as well as protection.