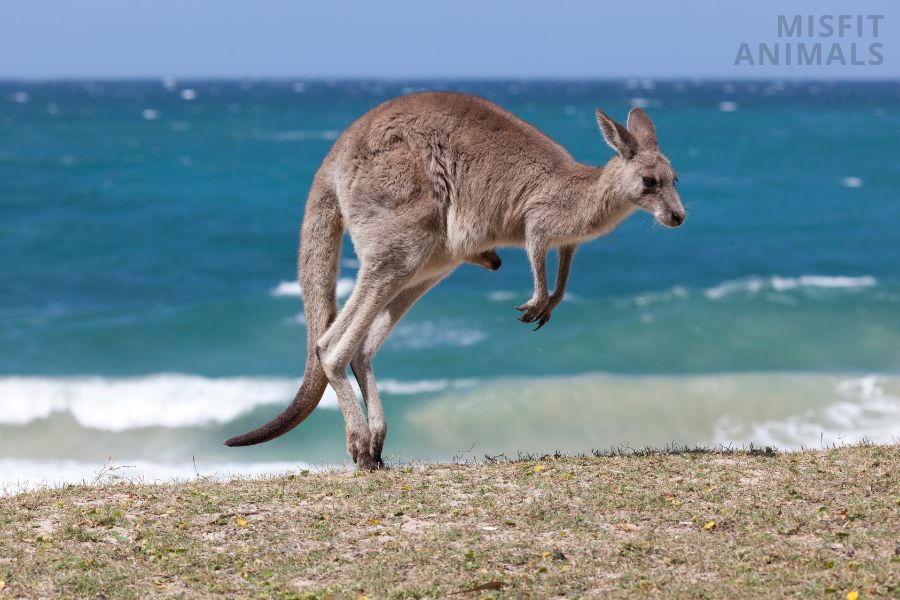 Kangaroos can jump 10 feet high and 30 feet far. They hop up to 44 mph. Kangaroos jump as their basic form of movement. They also jump when fighting and reaching vegetation in high places. To jump, they use their strong tails, hind legs, and big feet.

Kangaroos are known for two characteristics: fighting and jumping. As much as they are associated with martial arts, they might as well be compared to Olympic jumpers.

But how high, far, and fast can kangaroos jump? And how do they jump?

In this article, we answer all questions about kangaroo jumps, including height, length, speed, reasons, and how kangaroos are able to jump.

Can Kangaroos Only Jump?

Yes, kangaroos can jump only jump or hop for movement. Their only form of movement is some sort of jumping, like hopping, skipping, or “crawl-walking.”

Not only can kangaroos jump, but they are also the best at it. They use their muscular tails, hind legs, and feet to propel them forward.

When kangaroos aren’t jumping, they “crawl-walk,” although it is still a form of hopping. They place their front legs on the ground and swing both their back legs forward. They balance themselves with their tails.

Kangaroos can jump 10 feet into the air, as far as 30 feet, and do it at 44 mph. An adult kangaroo can jump about twice its body height vertically and five times horizontally.

Their jumping ability is even more impressive when considering kangaroos’ size.

The biggest red kangaroos can be as big as six feet and weigh as much as 200 pounds, but they are still able to move at high speeds.

How High Can Kangaroos Jump?

Kangaroos can jump as high as 10 feet. This is about twice the height of an average male red kangaroo. For comparison, the high jump world record is only eight feet and ½ inch.[1]

How Far Can Kangaroos Jump?

The average length an adult kangaroo can jump is 30 feet. The best long jumpers are the eastern gray kangaroos, reaching up to 44.2 feet.

How Fast Can Kangaroos Jump?

Kangaroos can reach speeds of 44 mph while jumping. The red kangaroos are the fastest of all kangaroo species. Their normal hopping speed is about 13-16 mph as they only reach their top speed for short bursts.

Kangaroos are the fastest land animals in their native habitat of Australia.

Why Do Kangaroos Jump?

Kangaroos jump to move around. They also jump while sparring and fighting. If kangaroos can’t reach fruits or branches in trees, they jump to grab them.

Jumping is the kangaroo’s default form of movement. Their bodies evolved to hop instead of walk or run. It allows them to quickly change directions, helping them easily outrun predators.

There are three reasons for a kangaroo’s jumping:

Kangaroos have evolved to jump as their main form of movement. This enables them to make sharp turns, which helps them outmaneuver opponents.

When kangaroos do not jump, they crawl-walk. This is a hop-like movement, where they place their front legs on the ground and swing their back legs ahead of them.[2]

All kangaroo movement is a form of jumping:

While fighting, kangaroos use their leg as their main weapon. They jump while balancing themselves on their tails and kick forward. Kangaroos jump during all situations of fighting:

Kangaroos are herbivores, meaning they eat plants. As ground vegetation is sparse in desert and savanna climates, kangaroos often search for food in trees.

If kangaroos can’t reach vegetation when standing up, they jump. They also push down on branches as they can’t grab them with their paws.

How Do Kangaroos Jump?

Kangaroos jump with their powerful hind legs. They also propel themselves forward with their muscular tails and their big feet.

The kangaroos’ muscular physique is made for jumping. They evolved to move by hopping to gain an advantage over their predators.

Jumping is coded into their genes. It’s the first movement a joeys do when they leave the pouch.

The powerful features of the kangaroo enable them to jump for long periods:

The strongest feature of the kangaroo is its hind legs. It is capable of kicking with 759 pounds of force and jumping at speeds of 44 miles per hour.

When jumping, kangaroos tuck their hind legs forward and push them back. Both their legs leave and touch the ground at the same time.[3]

Kangaroos have large feet, as big as a human shin. The sole (underside of their feet) is dark with coarse, hardened skin, preventing their feet from injuries.

Their middle toe is especially big and strong, equipped with a long claw. They use this when fighting.

The feet act as a platform to jump from. They are long and narrow to help the kangaroo cover distances of up to 44.2 feet by a single hop. The coarse skin on the sole has great traction which helps when landing and not losing momentum.

Even the tail is strong on kangaroos. It can lift the weight of an adult kangaroo weighing up to 200 pounds.

The tail is used almost like a spring. The kangaroo brings its tail to the ground behind its hind legs and forms a tripod. The tail then balances and helps push forward the roo when jumping.

Kangaroos’ tails are used so frequently and support so great portions of their weight that it is considered a fifth leg.[4]

Kangaroos are one of the greatest jumpers in the world. They can hop as high as 10 feet, as far as 30 feet, and as fast as 44 miles per hour. Some extremely strong kangaroos jump as far as 44.2 feet.

Kangaroos’ bodies evolved to jump. They use this while moving, fighting, and reaching foliage. Their jumps are made possible by their strong hind legs, muscular tails, and wide and long feet.

Are Kangaroos the Highest Jumping Animals in the World?

Are Kangaroos the Longest Jumping Animals in the World?

No, kangaroos aren’t the longest jumping animals. They are the best jumpers in Australia, but the snow leopard has the longest jump record in the animal kingdom. The record is 49 feet, which is longer than a school bus and five feet farther than the biggest eastern gray kangaroo jump.[5]

No, kangaroos can’t walk backward. Kangaroos can’t walk at all as the only motion they are capable of is hopping. The closest movement to walking they can do is crawl-walking, a forward-swinging motion when they balance themselves on their front legs.

What is Kangaroo Jumping Called?

The jumping motion of kangaroos is called saltation. There are only a few animals that can do this besides kangaroos, including rabbits, a few groups of rodents, and some insects.