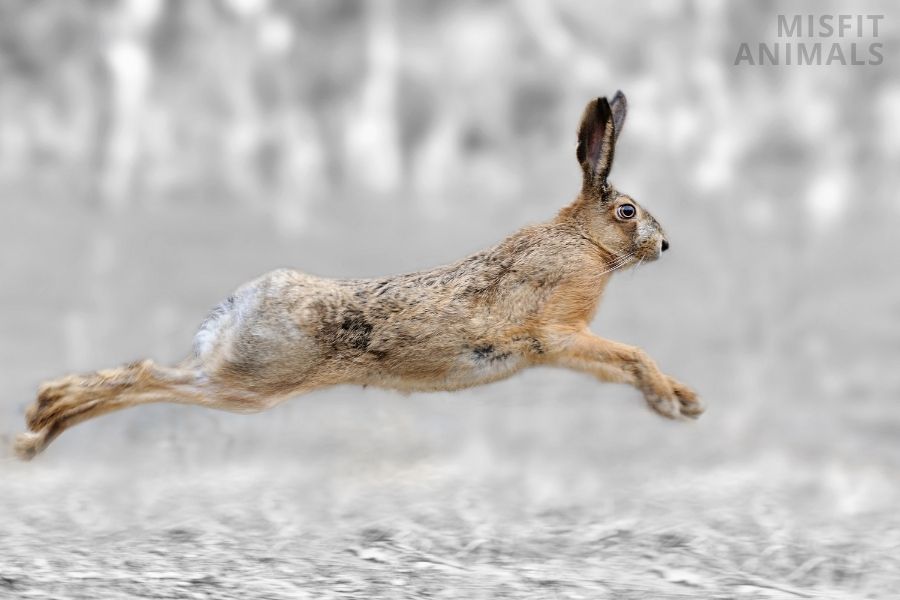 There are many creatures that can jump and hop. Some of them jump high into the air and others don’t.

We’ll talk about the first group.

Here is a list of ten animals that jumps and hops, including their capabilities and facts about them.

Here is a list of some of the most common animals that are able to jump:

Kangaroos can jump up to 44 feet (13.5 meters) in a single hop which is more than twice their height. They can also maintain a speed of up to 35 miles per hour over short distances.

The kangaroo is a marsupial from the family Macropodidae. There are four extant species of kangaroos:

Their large feet and powerful legs enable them to hop quickly on their toes, and they primarily use their tail for balance. They are the only large animals to use hopping as a form of locomotion.

Kangaroos have been hunted by humans for their meat and fur, but today they are protected by law in Australia. These unique animals are well-known symbols of Australia, appearing on the country’s coat of arms and on many of its coins. The kangaroo is also featured in Australian Aboriginal mythology and lore.[1]

When they’re not hopping around, kangaroos use their tails as props and lie down to rest or sleep.

The bullfrog is the best jumper among frogs. Their broad jump can reach 6.5 ft (2 m), which is more than ten times their own size.

Frogs are amphibians, and as such, they are able to live both in water and on land. They have smooth, moist skin and long hind legs that enable them to make great leaps.

Frogs come in a variety of colors, including green, brown, and red. Some frogs also have patterns on their skin. The average frog is about four inches long, but some species can grow to be much larger.

This amphibian is found all over the world, in both hot and cold climates. They are most active at night when they hunt for food. Frogs eat insects, small mammals, and even other frogs.

They play an important role in the ecosystem. They help to control insect populations and their tadpoles provide food for fish and other aquatic creatures.

The snowshoe hare can jump up to 12 feet (3.65 meters) in a single bound, making it the best jumper among hares.

The hare is a member of the family Leporidae and, like rabbits, lives in several parts of the world. Hares are generally larger than rabbits, with longer ears, and live alone or in pairs.

Unlike rabbits, their young are born fully furred and able to fend for themselves shortly after birth rather than spending several weeks blind and hairless. Most hares are brown, black, white, or spotted.

Hares are shy animals and live in areas with dense vegetation. When alarmed, they make a loud noise by thumping their feet on the ground. Hares also have excellent vision and hearing which helps them to detect predators.

They are herbivores and their diet consists primarily of grasses and other plants[2]. In winter, when food is scarce, they eat bark and twigs. The life span of a hare is around 3-5 years in the wild but reaches 10 years in captivity.

Jumping spiders can jump up to 6.3 inches (160 mm). They are agile and acrobatic, leaping at their prey with speed.

What makes these spiders special? For one, they have some of the best eyesight in the animal kingdom. They can see in incredible detail, which helps them spot their prey from far away.

But they don’t just rely on their eyesight. They also have special muscles that give them the ability to jump up to 50 times their own body length. That’s like a human being able to jump from the ground all the way up to the top of a five-story building.

Grasshoppers are some of the best jumpers in the animal kingdom. It all has to do with their long hind legs. Their powerful muscles and tendons store energy like a spring. They then release the energy in one big jump.

Some grasshoppers can jump over 20 times their own body length in a single bound.

Grasshoppers need to be able to jump quickly and accurately to escape from predators or to catch prey.

Fleas’ legs are long and well adapted for jumping. They can jump vertically up to 7 inches (18 cm) and horizontally up to 13 inches (33 cm), making them some of the best jumpers of all known animals (relative to body size).

Flea is the common name for insects of the order Siphonaptera, which includes approximately 2,500 species of small flightless insects that survive as external parasites of mammals and birds.

They are wingless insects with mouthparts adapted for piercing skin and sucking blood.

Fleas are external parasites, living off the blood of mammals and birds. The female flea must have a blood meal before she can lay her eggs. She can lay up to 50 eggs per day after feeding.

The eggs are white and fall off the host animal into the environment, where they develop and hatch into larvae.

Larvae are small, legless, and blind. They feed on organic debris and adults feed on blood. Adults live anywhere from two weeks to two years, depending on the species and the availability of food.

Kangaroo rats can jump up to 9 feet (2.75m) in one jump. They do so to escape predators or catch prey.

The kangaroo rat is a small rodent that is native to North America. These animals are well-known for their ability to jump, and they are also one of the few rodents that can hop like a kangaroo.

Kangaroo rats are found in desert habitats, and they use their powerful hind legs to jump long distances. These animals are efficient in their movements, and they can cover a lot of ground with each jump.

Kangaroo rats are small animals, and they have a fur-covered tail that is used for balance while jumping. These rodents also have large ears that help them to hear predators approaching.

The impala is a species of antelope found in Africa. The name ‘impala’ is derived from the Zulu word meaning ‘gazelle’. They are the second-largest antelope in Africa, after the eland.

The impala is characterized by its long, slender legs and bodies and striking coloration. The coat is reddish-brown to brownish-black in color, with white patches on the underbelly and inside of the legs. Males also have a dark mane running down their necks.

Impalas are known for their ability to jump, which they use to escape predators such as lions and leopards.

The hopping mouse can jump up to 13 feet (4 meters) when alarmed by predators.

The Hopping Mouse is a small mouse that is found in Australia. This small animal is an expert jumper and can leap up to two feet. They use their powerful hind legs to take giant leaps through the air.

They are also good swimmers and are known to jump into the water to escape predators.

This little mouse is shy and mostly active at night. They are good climbers and are often found in trees and bushes. The Hopping Mouse is an important part of the Australian ecosystem and plays a vital role in the food chain.

The froghopper, or more commonly known as the spittlebug, is a small insect that gets its name from its ability to jump long distances.

They produce what’s called “spittle”. This frothy substance is made up of saliva and air and surrounds the froghopper to keep it moist and safe from predators. When the spittle dries up, it forms a hard shell that the froghopper can use to protect itself.

What Animal Can Jump the Highest?

How High Can a Giraffe Jump?

Giraffes can’t jump at all. Their legs are too long and slender to support their weight in a jump.

What Animal Can Jump the Farthest?

The Gray Kangaroo can jump the farthest, with a maximum observed distance of 44.3 feet (13.5 meters).