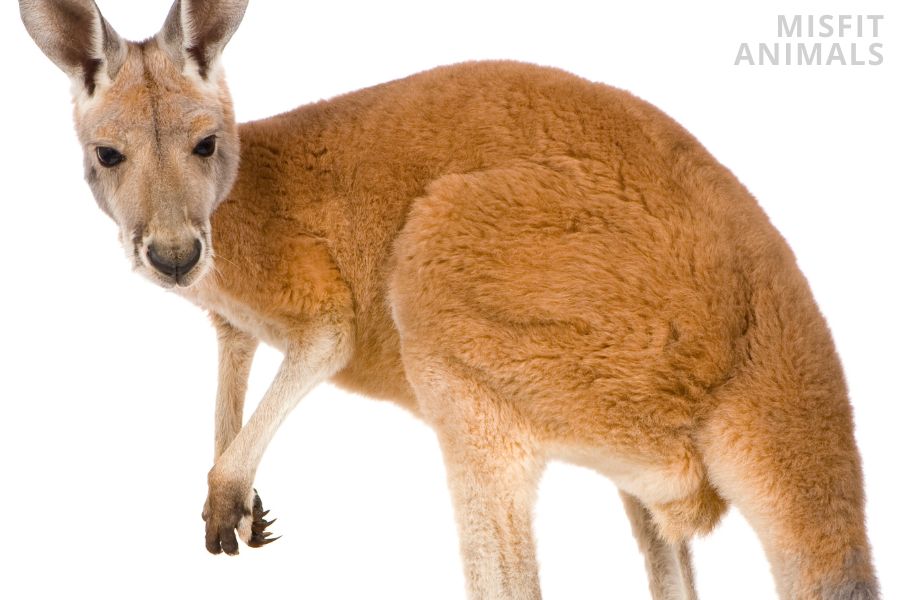 Kangaroos have four paws: two hands and two feet. They have five sharp claws on their hands and three claws on each of their feet. Kangaroos’ front paws are built like human hands but the digits are stubbier and they don’t have opposable thumbs. Kangaroos have claws to fight and defend themselves.

Kangaroos have one of the most unique anatomies in the animal kingdom, with their strong tails and special pouches. But their paws and claws are especially interesting.

These fascinating features of the kangaroo are mysterious to most people. There are even a few misconceptions about kangaroo claws.

This article will cover the facts about the paws and claws of kangaroos, including information about their feet and fingers.

Do Kangaroos Have Paws and Claws?

Kangaroos have five claws on both of their front paws and three on each of their feet. The inside of the paws is blackish with hardened skin. Their hands are akin to human hands and their feet have elongated fingers.

Kangaroos can grasp objects but they can’t hold on to dem, as their thumbs aren’t opposable.[1] They use their frontal paws to grab onto branches and push them down while they eat the leaves.

They have different claws on their hands and feet, though all are sharp and long.

The frontal claws (on the hands) can leave huge gashes, but the one giant claw on each of their hind legs is far more dangerous.

A well-placed kangaroo kick can easily disembowel someone.[2]

Kangaroo paws are blackish with coarse skin on the inside. They have five digits on their front paws and four thumbs on their back paws. Their claws on the front paws are long and curved, while the big claws on their middle thumbs are gigantic and straight.

Although humanlike, kangaroo paws are incapable of holding things, as their thumbs are not opposable. All of their paws have claws: five on the hands and three on the feet.

Claws are only used for self-defense as well. They don’t need them for hunting, as kangaroos don’t hunt: they are strictly herbivores.

Kangaroo front paws (hands) are similar to human hands. They have five thin fingers and small palms on each hand. Their palm is covered by paw pads which are coarse, blackish, and similar to dog paw pads to the touch.[4]

Their back paws (feet) are long and thin. The brunt of the kangaroo’s weight is supported by its middle toe, which is why it needs to be strong.

The two inside toes on the feet are fused together to make up the claw. This is also known as syndactyly toes.[5]

The hand claws are black, curved, sharp, and big relative to their finger size. An adult kangaroo’s front claws can be as big as an adult human’s pinky.[6]

Kangaroos’ claws on the feet are varied in size. Two of the claws are located on the outside of their feet, while their two middle toes fuse together into a long claw.

The middle claw on their feet is huge, straight, and razor sharp. Kangaroos use their middle claws to inflict lethal wounds when kicking.[7]

There are six kangaroo species in Australia. All have the same general characteristics.

The black wallaroo is the smallest. This species’ paws can easily fit in a human hand. The red kangaroos have the biggest paws, with fingers (including claws) that can be bigger and wider than an adult man’s digits.[8]

All kangaroos have two types of paws:

How Many Paws Do Kangaroos Have?

Kangaroos have four paws: two front paws, and two back paws. They use their front paws to grab branches, brawl, and defend themselves from predators.

Their back paws are longer than the front paws. Kangaroos use these to jump off the ground. The brunt of the kangaroo’s weight is supported by the middle toe.

How Big Are Kangaroo Paws?

Kangaroos’ back paws are long and thin. A grown individual’s back paws can be as long or longer than an average human shin of 15 inches.

Here is a list of the biggest to smallest kangaroo paws based on species:

Kangaroos have five sharp and curled claws on each hand. They have three claws on both of their feet, with the middle one being the biggest. Kangaroos’ claws are sharp enough to easily cut through flesh.

They use these claws to brawl against each other or to defend themselves against their predators.

How Many Claws Do Kangaroos Have?

Kangaroos have 16 claws altogether. They have five claws on each of their hands and three claws on their feet.

How Big Are Kangaroo Claws?

Kangaroo claws can grow as long and wide as their fingers on their front paws. Their back claws are all front-facing and vary in size.

Why Do Kangaroos Have Claws?

Kangaroos have claws to fight against predators and for intimidation purposes. Males also use their claws when fighting each other for dominance.

Kangaroos do not use their claws for hunting. Their diet exclusively consists of plants and vegetation and they don’t go out of their way to attack other animals.

They develop their claws in their mother’s wombs. Baby kangaroos are born with developed claws to help them crawl into their mother’s pouch after they are born.

Kangaroos use their big claw on their middle toe when kicking. They balance themselves on their tails, raise their lower body, and kick their target with the claws on their feet.

Their claws are mostly used in violent scenarios:

Male kangaroos fight each other to assert dominance. Their fights are often violent, sometimes ending in death.

Males use their front paws and claws to grapple while brawling, scratching their opponent’s face and neck. When they find an opening, the fighters lift themselves on their tail and kick with their claws.

A well-placed kick can easily pierce both skin and bone, leaving a potentially fatal injury.

Kangaroos have few natural predators, but they still need to defend themselves. Their claws are useful tools against all animals that can potentially harm them.

Most predators steer clear of kangaroos, as getting hit by their middle back claws is too big of a risk. One adult red kangaroo can take on several predators at a time.

Kangaroo predators include the following:

Kangaroos are not territorial, but they are defensive about their personal space. If an animal annoys them, the kangaroo first tries and scare them off with growling and coughing sounds.

They pair the noises with flexing their powerful muscles and showing off their sharp claws.

These all serve as warnings to the intruder.

Kangaroos have four paws and 16 claws. Kangaroo claws are relatively big, sharp, and curly, with their biggest claw being a huge straight nail on their middle toe.

Their claws are dangerous and can easily disembowel humans. They use them for self-defense, brawling, and intimidation.

Why Do Kangaroos Lick Their Wrists?

Do Kangaroos Have Powerful Hind Legs?

Yes, kangaroos have powerful hind legs. They use their hind legs to hop and kick predators and each other. Their front legs are small due to how kangaroos evolved. Smaller front legs help newborn kangaroos crawl into pouches.

How Many Legs Do Kangaroos Have?

Recent studies show that kangaroos have five legs. The Biology Letters stated that kangaroos’ tails act like fifth legs, as they propel themselves forward with them when they are hopping.[12]

What Are Kangaroo Paws?

Kangaroo paw is a name for a species of plant native to Australia. They are named as such as they resemble the front paws of kangaroos. They are not to be confused with the animal’s body parts.[13]