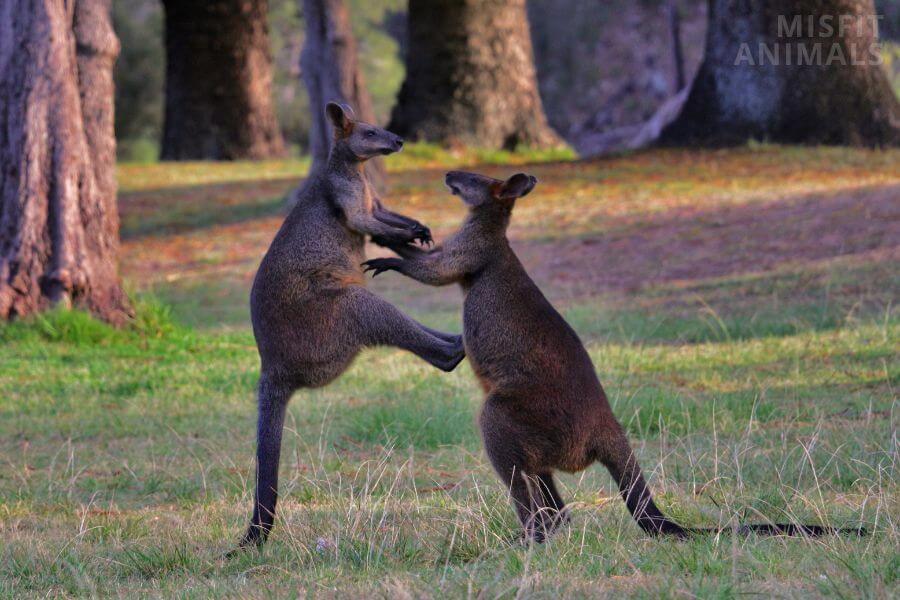 Kangaroos are dangerous due to their strong kicks, claws, bites, and wild nature. Attacks on humans are rare, as they only attack when threatened. When they do attack, they can kill a person.

Kangaroos aren’t necessarily the docile grazing animals you think they are. Their society is highly hierarchical and males get into bloody brawls on a daily basis.

But are kangaroos aggressive towards humans as well? If so, when do they attack? And can kangaroos kill you?

In this article, we will explain all of the questions above and more. You will also learn how to avoid a kangaroo attack.

Kangaroos are dangerous if threatened or frustrated. They have weapons at their disposal, like their kicks and claws, which they use to defend themselves. Kangaroos rarely go out of their way to harm humans though.

Agitated kangaroos can be threatening. But before they attack, they will show clear signs of their displeasure. This gives you a chance to get away.[1]

If you don’t take the necessary safety measures when kangaroos are nearby, they may attack. These attacks are rare but deadly, as kangaroos are capable of leaving you with serious injuries.

Kangaroos are generally well-built and muscular, so you should never fight them.

They use the following adaptations to fight:

Kangaroos are usually not aggressive towards humans. They tend to stay neutral. The risk of kangaroo attacks is slim, but you should still be wary. Kangaroos turn aggressive when frustrated, threatened, or when searching for a sparring partner.

Kangaroos rarely go out of their way to attack humans. Their normal first instinct is to flee if they feel threatened.[2]

But, there are still several situations when kangaroos pick a fight:

Kangaroos get annoyed if you intrude on their space. While they are not territorial animals, they prefer living unbothered by humans.

They don’t necessarily feel threatened when you approach them, but they might get annoyed. If they do not flee, they will show signs of aggression and you should get away.

Kangaroos are social animals living in mobs and the males are the main defenders of their group. They need to defend themselves and their mob, even though they have few natural predators.

Babies are even more protected. If a kangaroo joey is threatened, its mother will also join the fight.

If a kangaroo feels threatened by you, it will most likely flee. If it doesn’t, back away slowly.

Kangaroos like to fight. Males spar against each other to maintain their physique. After sparring, they fight to assert dominance.

Pet kangaroos see their owner as an equal. It may try to fight them and won’t hold back when it comes to kicks. Even playfights with kangaroos get violent.[3]

How Do Kangaroos Attack?

Kangaroos attack with their strong kicks, sharp claws, powerful bites, and capability of drowning are all capable of seriously injuring you.

Kangaroos evolved to survive in their harsh native land of Australia. They are more than capable of defending themselves and killing their adversaries.

By far their favorite and strongest move, the kangaroo’s kick is powerful enough to crush bones. A fully grown red kangaroo weighing up to 200 pounds can kick with 759 pounds of force.

Kangaroos lift themselves on their tails and kick with both legs. They aim for vulnerable areas, like the abdomen or groin.

Kangaroos are well-equipped. They have long and sharp claws: five curled nails on each front paw (hand) and three claws on each hind paw (foot). These can leave deep gashes.

They also punch with about 275 pounds of force.

Kangaroos have a giant straight claw on each of their middle toes that they use when kicking. If the attack is well-placed, they can disembowel their target.

Kangaroos bite with up to 925 PSI. They bite anything that gets near their mouth during a fight. When they attack humans, they most often bite their arms.

When chased, kangaroos tend to run towards the water. If their chaser follows them there, the kangaroo will attempt to drown them by pushing them under the water.[4]

Can Kangaroos Kill You?

Yes, kangaroos can kill you. They fight violently and aggressively. They possess considerable strength and dangerous features, like claws and strong kicks.

While kangaroos can kill you, you shouldn’t be worried. Fatal kangaroo attacks are extremely rare. Even the biggest species (the red kangaroo) is more likely to flee than attack when disturbed.

How to Defend Yourself Against Kangaroos

The best way to defend yourself against kangaroos is to avoid them. If an angry kangaroo approached you, face them and back away slowly. When attacked, drop prone and protect your head and neck.

Before kangaroos attack, they show many signs of aggression. This is your chance to avoid the encounter.

During the attack, kangaroos will use every tool at their disposal.[6]

If a kangaroo is growling or coughing, do not touch them or go near them. This is the first sign of aggression.

If you make a short cough, you communicate that you don’t have harmful intent, giving you a chance to de-escalate the situation.

Maintaining eye contact with a kangaroo communicates that you want to fight it. Kangaroos won’t back away from a challenge, so do not look in their eyes.

Keep your arms close to your body. By making yourself smaller, you seem less threatening to the kangaroo and it might disregard you.

Do not run or make sudden movements. Kangaroos are easily scared and they may attack if your movement is erratic.

6. Do Not Turn Your Back

Face the kangaroo while backing away. It will see you showing your back as a chance for an easy strike.

7. Use a Barrier or a Stick

Hide behind a tree or a fence. If you have a long object, like a stick, extend it towards the kangaroo, but do not strike it.

8. Drop on the Ground

Try to curl into a fetal position or drop prone facing down. Remain calm and wait until the kangaroo moves away.

9. Protect Your Head and Neck

Your most vital areas are your head and neck. Kangaroo kicks can easily break your neck or bludgeon your skull if unprotected.

No, kangaroos are not friendly, but they are not inherently aggressive either. Wild kangaroos are generally neutral. Some say they make good pets, but they have many needs. Keep your pets away from kangaroos, as they might be attacked.

As all wild animals, kangaroos want to be left alone by humans. They are neither friendly nor aggressive under normal circumstances.

Kangaroos can be friendlier if kept as pets or raised in human care. It is risky, though, as they will see their owners as equals and spar with them.

Kangaroos can make good pets, but they are not for everyone. They are active, social, and can’t be kept inside.

Kangaroos don’t go out of their way to attack pets, but it does happen occasionally. Encounters between dogs and kangaroos are especially common. Roos can leave nasty injuries on your pets.

Keep vigilant while taking your pets near kangaroos or kangaroo-infested areas.

Kangaroos can be dangerous, but they are normally neutral and flee when threatened. They turn aggressive when cornered, frustrated, threatened, or when they want to spar. Kangaroos can kill you with their kicks, claws, bites, or by drowning you. Attacks, especially fatal ones, are rare.

To avoid attacks, back away and make yourself less threatening. When attacked by a kangaroo, drop to the ground and protect your head and neck. A kangaroo under human care can be friendly, but they need a huge space and company to be good pets.

Why Are Kangaroos So Mean?

Kangaroos are mean because they are wild animals. As much as they are disorderly sometimes, kangaroos just act upon their natural instincts. Many wild animals attack humans, like bears or lions, but they are not considered to be mean.

No, kangaroos do not eat humans. They rely on a plant-based diet as herbivores. Kangaroos never hunt and they only fight other animals for self-defense or to protect their mob.

Can You Tame a Kangaroo?

Yes, you can tame a kangaroo. Pet kangaroos may still spar or fight with you and they won’t listen to their names. Taking wild kangaroos as pets is illegal and they cannot be tamed.