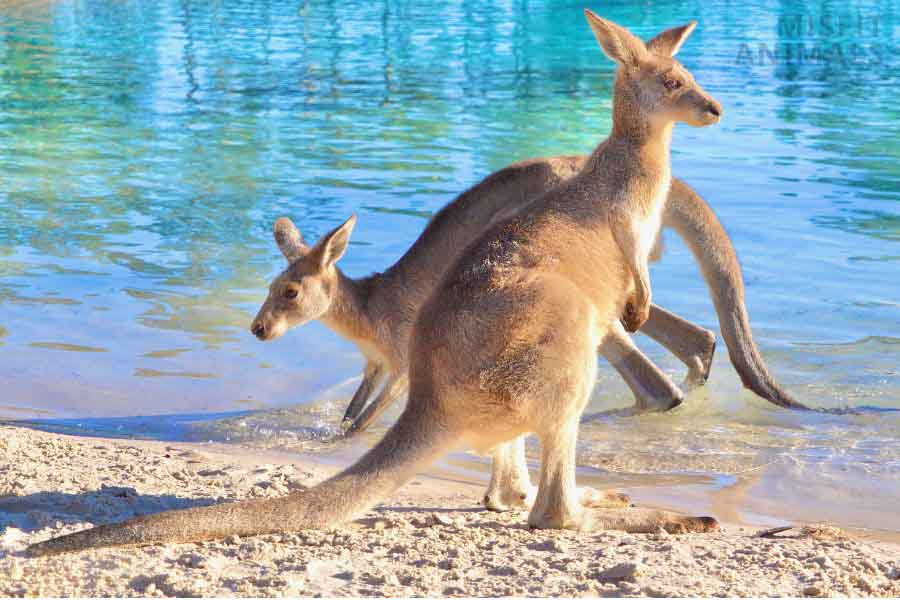 Kangaroos don’t drown people and there haven’t been any reported cases in history. While strong kangaroos are capable of drowning adults, they never do. They do drown dogs, dingos, or other threats, using their forepaws and arms to hold their opponents underwater.

There are a lot of misconceptions about kangaroos. Some people think they are bloodthirsty animals that attack humans at random. This is not true.

There are even rumors that kangaroos have a tendency to drown people. But is it fact or fiction? And if not people, do they drown other animals?

This article uncovers the truth about kangaroos drowning people and clears up any misconception about why they get into the water.

Kangaroos don’t drown people. When they are chased and get into the water, their intentions are to flee. Large kangaroos are capable of drowning smaller animals and humans, so be careful.

Kangaroos don’t drown people. This is an urban legend. There haven’t been any reported cases of drowning in history. It also doesn’t make sense for them to fight in the water, as they are more dangerous when on land.

If a kangaroo jumps into the water, you shouldn’t follow them. They most likely won’t drown you, but large and agitated kangaroos are capable of harming or killing you.[1]

When Do Kangaroos Drown People?

Kangaroos may drown people when they feel threatened or agitated. Males are especially aggressive when they are looking to mate.

Kangaroos’ first instinct when they sense danger is to flee. Kangaroo attacks on humans are uncommon and fatal drownings never occur.[2]

Sometimes, kangaroos do jump into a nearby body of water when fleeing. They do this in hopes that their chaser doesn’t follow them.

If their pursuer does follow them into the water, the kangaroo will attempt to drown them.

Here are some scenarios when kangaroos attempt to drown people:

How Do Kangaroos Drown People?

Kangaroos drown their opponents by using their paws and claws to grip them, then pushing them down with their strong arms.

Kangaroos are known for their strong physique. While males are especially muscular, the average kangaroo isn’t strong enough to drown an adult. Kangaroos do not drown people.

Large kangaroos can weigh 200 pounds and be as tall as 6.9 ft, towering over the average adult man at 5 ft 9 in.[3] They use this muscle and weight advantage when they try to drown other animals.

Kangaroos have huge claws on their front paws which they use to grab onto their chaser. Their muscular arms then hold them underwater.[4]

Here is how kangaroos drown their pursuers:

Why Do Kangaroos Drown Animals?

Kangaroos only drown animals if they are backed into a corner and can’t see any possible way out of confrontation. Their intentions are solely self-defense.

Fleeing into water is a common defense mechanism among herbivores. While we don’t fully know kangaroos’ intentions, the lack of cases where people are drowned by kangaroos suggests it is a method of fleeing.

Kangaroos can drown people if they are followed into the water and further harassed. Even small kangaroos can inflict harm on adults, so it’s best not to follow them in water.

What Animals Do Kangaroos Drown?

While kangaroos have few predators, as they are capable of defending themselves both on land and in water, a few animals do try to prey on them. These are most commonly dingoes and wild dogs.

Humans shouldn’t be afraid of kangaroos drowning them, but the large marsupials are capable of drowning smaller animals. There are numerous cases when kangaroos attempted to drown dingoes that followed them.[5]

Domestic dogs are also susceptible to drowning. Friendly dogs may want to play with kangaroos, and aggressive ones may chase them. Kangaroos can’t discern intent, so they defend themselves at all costs when dogs approach them.

Do not let your dogs chase after kangaroos.

How to Avoid Kangaroo Attacks & Drownings

You should stay away from kangaroos in water to avoid kangaroos drowning you. Kangaroos do not get out of their way to attack you or drag you into the water, so you shouldn’t fear their attacks as long as you keep your distance.

Kangaroos rarely chase down humans to harm them. They are herbivores and gain nothing out of killing other creatures.

They will only attack you if you harass them. If you avoid kangaroos in water, the chances of them drowning you are zero.

How to Avoid Kangaroos Drowning You

If you’re in a situation where both you and a kangaroo are in the same body of water, do the following:

What to Do When a Kangaroo Tries to Drown You

If a kangaroo engages in a fight with you in the water, remain calm. Most of the time, you can overpower them, but you might suffer minor to major injuries.

If a kangaroo tries to drown you, you should do the following:

Kangaroos are unlikely to drown people and there haven’t been any reported cases ever. Large kangaroos are capable of drowning adult men, so it’s best to avoid them. They turn aggressive when they are harassed, threatened, or want to mate.

Kangaroos are known to drown their predators from time to time. Dingoes and dogs are the most likely victims of drowning. To avoid a confrontation with kangaroos, back away, do not show your back, and get out of the water. If attacked, try to push them, slip away, and flee when you break free.

Yes, kangaroos can swim. They are adept swimmers and can move in water relatively fast. They swim like dogs with their limbs moving in a paddling motion. Kangaroos swim both out of necessity (escaping fires or predators) and cross rivers to get to grazing areas.

Kangaroos rarely fight humans. Their first instinct is to flee, so they never go out of their way to harm people. If they are agitated, they show clear signs of aggression, like hissing, growling, flexing, and thumping their legs. Avoid agitated kangaroos, as they can inflict serious wounds.

Can Kangaroos Kill You?

Yes, kangaroos can kill you, but it is unlikely. Kangaroos can kick with 759 pounds of force and their claws are capable of disemboweling you, but fatal cases are uncommon. As of September 2022, a 77-year-old man’s death was the first fatal kangaroo confrontation since 1936.[6]