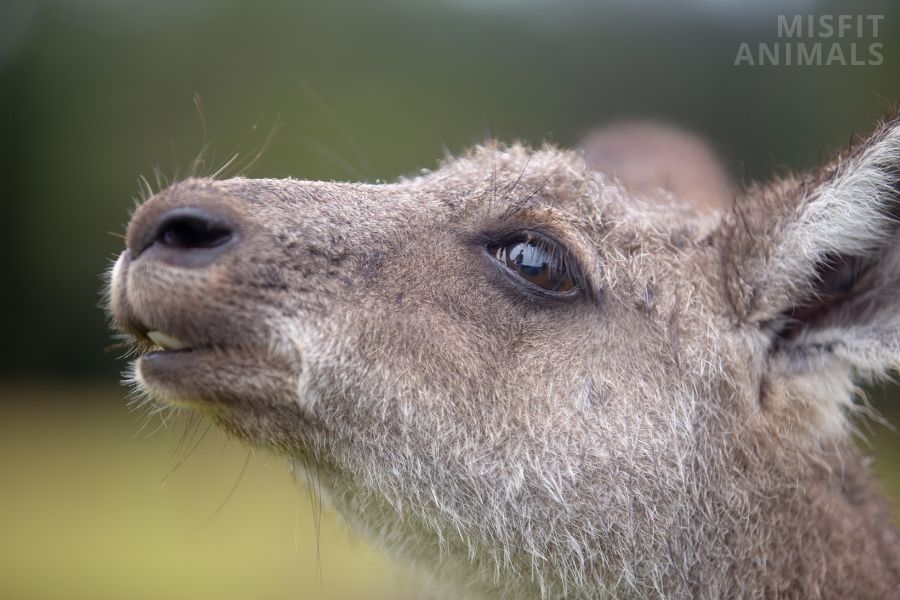 Kangaroos make clicking sounds, as well as screams and barks that sound like coughing. They use different sounds in different situations. All kangaroos largely sound the same, but larger species have deeper and louder voices.

Kangaroos are macropods endemic to Australia. These macropods are not known for being talkative, but they do make sounds occasionally.

These animals usually only make sounds around humans when they are disturbed, making their vocalizations generally unknown to the public.

Kangaroos have gravelly voices. Their screams and growls sound deep and raspy. Their clicking sounds are soft and their screeches are high-pitched, similar to birds chirping.

Wild kangaroos make a variety of sounds in the habitat of their native Australia. Their noises range from ear-piercing screeches to low, raspy growls.[1]

They are noisier around each other than in human presence. More often than not, kangaroos feel disturbed when they are near people, so the only noises they make are low-pitched and domineering growls.[2]

What Sounds Do Kangaroos Make?

Like all animals, kangaroos talk for communication. Male kangaroos “cough” and growl at each other when they are fighting, while mother kangaroos make a series of clicking sounds akin to some monkey species noises.

Their vocal range is generally. They use different noises and sounds in different circumstances.[3]:

Kangaroo growls are extended, gravelly, and low-pitched. These vocalizations are not necessarily loud, but they can be.

They function as a preliminary warning for anyone disturbing the kangaroo’s personal space.[4]

Kangaroo clicking sounds are short and rattling. Babies make soft, stabby clicks, usually three in quick succession. These are often used to grab the attention of their mother. Older kangaroos make shorter and louder chattering sounds when they sense danger or call for other kangaroos.[5]

Screeches are short and high-pitched. They start as a lower-pitched sound and finish in a shrill, loud noise. These noises sound like a toy with a whistle inside (like a rubber duck) being squeezed. Kangaroos usually make them in quick but methodical succession.

Kangaroo screams are loud and shrill. They sound like monkey screams mixed with elephant trumpeting, although much quieter.

The barking sound from kangaroos is significantly different from dogs’ barking. Barks sound like growls, but they are shorter, louder, and raspier. They are described similarly to the exhale or cough of a severely ill person with an infected throat.[6]

Baby kangaroos sound like their older counterparts, except their voices are weaker and more high-pitched.

Like all animal babies, kangaroo joeys also mimic their parents’ sounds. Joeys make noises to call for their mothers most of the time. These sounds are short and weak clicking noises like a small bird chirping.

Newborn joeys do not make any sounds. They are born severely underdeveloped and their vocal cords only become fully functional after two to four months in their mother’s pouch.

The sounds baby kangaroos make include:

Why Do Kangaroos Make Different Sounds?

As kangaroos use sounds for communication, they need different sounds for different situations and information. Kangaroos make clicking sounds to call for each other, growl when distressed, and may scream when they fight.

Kangaroos are social animals. They live in mobs of up to a hundred members or more.

Kangaroos find themselves in many social situations that require different sounds to communicate intent and information:

Kangaroos usually don’t make mating calls, as males mate with females inside the mob. But males do have to fight for dominance. They have to earn the right to mate.

Male kangaroos often brawl and fight to assert dominance. Prior to fighting, the two kangaroo jacks growl at each other while flexing. This is to show intent that both of them are preparing to fight.

They make these sounds to deter and scare their fighting partner.

Kangaroos are not territorial, but they are protective of their personal space. When disturbed by humans, other animals, or even other kangaroos, they growl in a low tone while flexing.

This serves as a preliminary warning.

If the low growling does not work, kangaroos will bark at their disruptor in a coughing fashion while jumping toward them. This acts as the last warning before the kangaroo attacks.

Kangaroo sounds while disturbed include:

Joeys Calling for Their Mother

Sounds Joeys make when calling for their mother include:

Mothers Calling for Their Joey

Mothers make louder, lower clicking sounds to call for their joeys. These noises are more like low-pitched pig grunts and aren’t rattling like baby joeys clicking sounds. Kangaroo does make these noises when they sense danger and want to protect their children.

If can’t find their children or they don’t respond to their clicks, mothers may also scream. This is a last-ditch effort to find their joeys.

Sounds kangaroo mothers make when calling for their joey include:

The red kangaroo makes the loudest and deepest sounds of all kangaroo species. They are the largest kangaroos in Australia, as males reach 5 feet 10 inches tall and weigh 198 pounds.[8]

All kangaroo species make similar sounds. The only difference between the sounds of the different species is their pitch, volume, and tone.

Kangaroos have an extensive vocal range. They make low-pitched growls, cough-like barks, shrill screams, squeaky screeches, and soft clicks. Joeys tend to mimic the sounds of adult kangaroos around them.

Kangaroos are only talkative with each other. They use growls and barks to deter or intimidate opponents, clicking sounds to call for other kangaroos, and screeches to let the others know where they are.

No, kangaroos don’t grunt. Adult kangaroos can make grunt-like noises that are like low-pitched pig oinks. Kangaroos do this when they call for their children or each other.

What Sounds Do Kangaroos Make the Most?

Kangaroos mostly growl and click. Kangaroos growl to deter intruders or potential opponents. They will make clicking noises when calling for other kangaroos or to usher their children to safety

Yes, kangaroos hiss, but not like cats or snakes. Kangaroo hisses are more like their growls, but much quieter. They make these sounds as the first sign that they are disturbed and wish to be left alone.