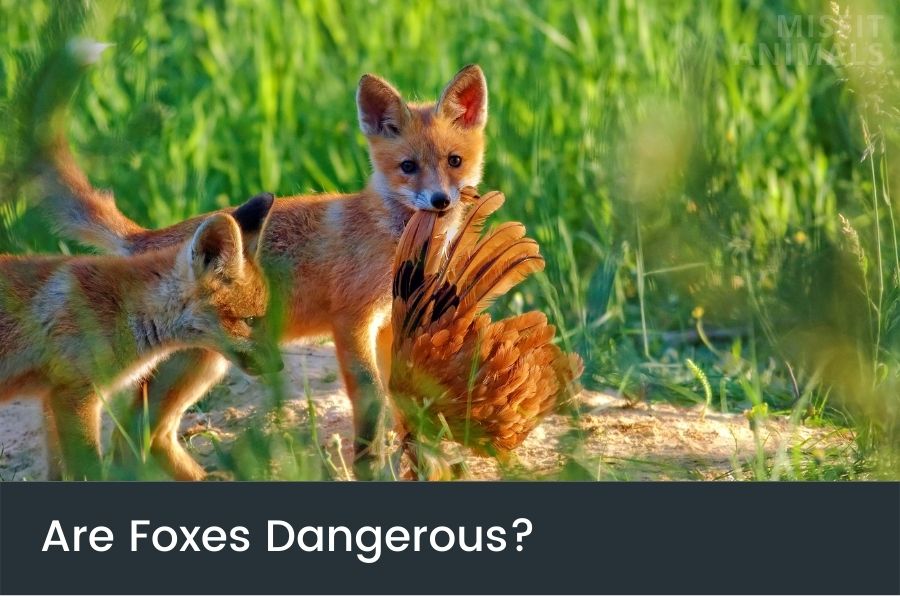 Foxes do typically not attack humans and are hence not dangerous to humans. They may attack some pets, like rabbits, but are no danger to medium to large dogs.

Humans can be considered to be more of a danger to foxes than the other way around.

Foxes are very timid animals and are typically more afraid of humans.

While they are typically not aggressive towards humans, there are some instances where they are dangerous. This is mainly if they’re infected with diseases.

In this article, we’ll explore whether foxes are dangerous when they are, and how to avoid a fox attack.

No, foxes are typically not dangerous animals. Not to humans at least. Foxes are predators, meaning they hunt for food. They usually hunt smaller animals, such as rabbits or small birds.

However, foxes are still wild animals and need to bed treated as such. If you stumble across a fox in the wild, you should be wary.

Are Foxes Dangerous to Humans?

Foxes are not dangerous to humans unless they are rabid or have mange. Rabid foxes may attack people or pets as they are highly aggressive. If you see a fox that is acting strange or seems to be sick, you should call animal control immediately.

Rabies is a serious health risk to humans. Once symptoms appear it’s almost certainly fatal, with a 99.9% mortality rate. [1]

It is believed that the red fox is the main wildlife carrier of rabies in Europe while the US Centers for Disease Control have recorded that the foxes account for 7.2% of the rabies cases in the US.

There are several strains of the rabies virus and these strains infect only their specific animal groups. This means, that there is a fox rabies variant that infects only foxes, and a raccoon variant of the virus that only infects raccoons.

Foxes that have rabies are often seen to act aggressively and show signs of losing their sense of balance, appear drunk, and have difficulty walking. [2]

If a fox is infected with rabies, it won’t be scared of humans. A clear sign of rabies or other diseases is unnatural behavior, such as not running away from humans and loud noises.

Mange is a contagious skin disease in animals from the mite Sarcoptes scabiei.

There are many different types of mange and it can affect many animals. It causes extreme itching, usually in the ears or paws. The result is often hair loss and open sores.

The most common infection in foxes is said to be the sarcoptic mange. This is caused by a species of mite (Sarcoptes scabiei). [3]

This mite lays eggs in the skin of the fox which then causes visible symptoms: itching, hair loss, scabbing, and reddish to dark bare skin.

Mange is typically confined to a fox family or to foxes that share dens or touch each other.

The foxes can often die of starvation and dehydration because they may not be able to move about especially when they get a secondary infection that makes the mange and symptoms worse.

Foxes with mange are dangerous to pets. If your see signs of mange in your animal, make sure to bring your pet to the veterinarian.

No, foxes usually don’t attack humans. They tend to avoid contact with humans as much as possible. They shy away from situations that they are unfamiliar with and are easily startled by noises or animals bigger than them.

When Do Foxes Attack?

Like with many wild animals, foxes will attack if they are threatened, harassed, or stressed. If they are in danger with no means of escape, they’ll attack.

If you’re ever facing a fox, make sure to give it an escape route. If it can get away without a conflict, it will.

Yes, foxes do attack pets. Foxes are predators and opportunistic feeders. They’ll take advantage of whatever is available to eat. Urban foxes have often been observed attacking and eating pets.

Smaller animals that present as an easy meal (like small rodents, birds, kittens, or chickens) are in danger of being attacked by foxes.

If you live in an area with lots of fox sightings, you should take some safety precautions:

While foxes won’t invade your garden when you’re around, they may do so when you’re away, or if they’re starving.

Be aware of your surroundings and take precautions to protect both you and your pet from any possible encounters with foxes.

Are Foxes Dangerous to Dogs?

No, foxes are typically not dangerous to dogs, as most dogs are either as big or bigger than foxes. Small dogs can fall prey to foxes, as they can’t defend themselves against a fox.

Foxes have been observed attacking dogs when they are hungry and desperate enough.

Dogs are descendants of wolves, a natural enemy of the fox. It’s a natural instinct in dogs to hunt foxes, which is why you should keep an eye on your pet.

If your dog threatens a fox’s kits, the fox will attack. They are very protective animals, both of their family and territory. Hence, dogs should not be left unattended if there are many foxes in the area.

Are Foxes Dangerous to Cats?

Like dogs, cats are typically not at risk of being attacked by foxes. Small kittens and cats under 5 pounds are.

However, it is more likely that a fox will attack your cat than a dog since cats are typically smaller.

You can most often let your cat stay outside, but the best way to avoid a fox attack is to keep your pet inside. This is also the best advice to keep your cat safe from other hazards.

As with dogs, if a cat threatens a fox’s kits, the fox will attack, almost no matter the size of the cat.

Smaller pets, such as rabbits, hamsters, and guinea pigs are very much at risk of being attacked by a fox.

Foxes are predators, and their primary prey is mice, rabbits, reptiles, birds, and other small animals.

They see these animals as an easy meal if they are left unprotected outside. It is best to keep your small pet inside at night, or in a predator-proof enclosure. This is especially important in peak fox season.

If you are unable to keep your small pet inside, make sure to either fox-proof your garden, or use some kind of fox repellant near their enclosure.

Foxes are wild animals, but can indeed be friendly toward humans. It’s advised not to feed foxes, or to befriend them, as their behavior can be unpredictable.

They are solitary creatures and typically only keep to themselves to avoid human contact. However, it’s not uncommon for foxes to become tolerant of human presence.

Most people experience friendly foxes when feeding them. But if a fox approaches you, you should shy away from it.

When Do Foxes Come Out?

Foxes are nocturnal creatures, meaning that they sleep through the day and come out at night. However, it’s not uncommon to see foxes roaming around during the day.

They can adapt quickly to changes in their environment so they can also be active during the day. This primarily happens if their prey is most active in the daytime.

Foxes are also considered to have crepuscular habits which means that they are active during the twilight hours (at dusk and dawn).

How Do You Get Rid of a Fox?

While foxes are not typically dangerous to humans, they can still be considered a pest.

Foxes may kill your pet, steal from your garden, or invade your property. They also smell foul, especially if they mark your home as part of their territory.

The best ways to get rid of foxes are by scaring them away, keeping them away using a fox repellent, or building a proper fence around your property.

Getting rid of foxes is important to make sure nothing happens to your family, your pets, or your property.

One way of getting rid of foxes is by scaring them away. Foxes typically like quiet places where they can rest.

You can scare foxes away using loud noises. Bright, flashy lights also help to get rid of foxes that pass by your property at night. Foxes will stay away from areas that feel unsafe.

Another way to get rid of foxes is to make use of fox repellents. Fox repellents are electronic devices that produce loud, sharp sounds or give off a smell that foxes don’t like.

Electronic fox repellant devices, or scare devices, often comes with motion sensors. These will go off once a fox passes by, scaring it away before it even enters.

Fox repellents using smells typically use chemicals that mimic the smell of a large animal or of another fox. This makes it appear that your property has already been marked by a bigger predator.

Some devices also make use of ultrasonic sounds to deter foxes, but these have mixed reviews.

One of the best ways to help get rid of foxes is having a good fencing structure in place.

Foxes can jump higher than 3 feet and can scale walls that are 6 feet tall. Hence, having proper fencing in place is important. Building a tall fence may not be enough though, making fox-proofing equally important.

If you’re building a fox-proof fence, you should build it at least 6 feet tall. Besides the height, adding an overhang can be very effective at keeping them from climbing up the fence. Adding barbed wires on top is also an option.

You should also have metal matting buried in the dirt right beneath your fence. This way foxes won’t bury their way into your garden.

Foxes are not dangerous to humans unless they’re infected with rabies. They are however dangerous to small pets, as they see these as an easy meal. Foxes tend to stay away from humans but will invade your garden if they’ve found something they like.

They aren’t friendly creatures by nature, but can be if raised in captivity. As stated, they keep their distance from humans, as well as other animals, only getting near when hunting.

To avoid foxes from getting to your pet, you can scare them away using a fox repellant device, or you can build a fox-proof fence.