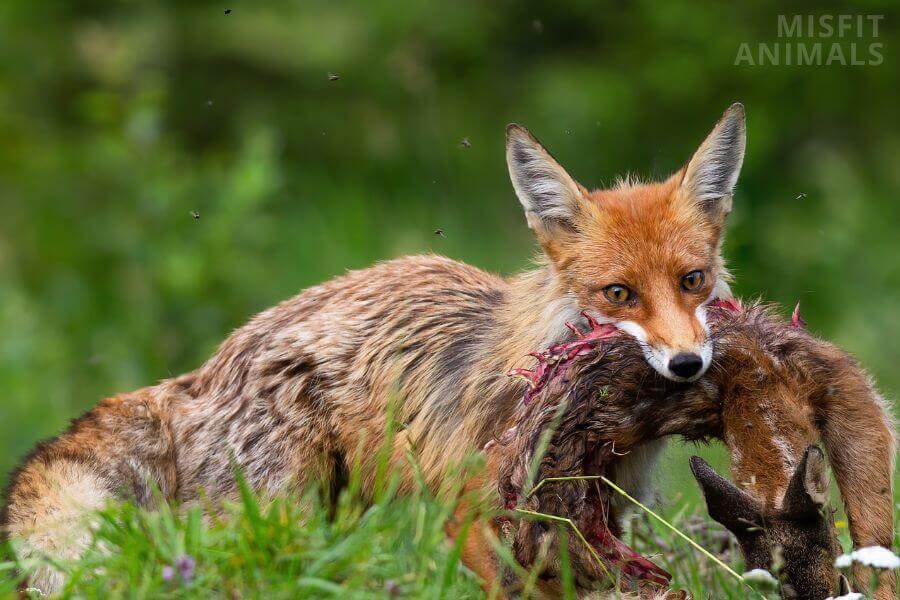 Foxes can eat cats, but it rarely happens. When it happens, foxes attack young or weak cats, as they are easier to catch. If foxes are hungry and all they can find is a cat, it is possible that they will eat it.

Foxes do not attack humans, but sometimes they end up attacking and eating our pets.

Cases of foxes attacking and eating cats are extremely rare. Only young or old cats aren’t able to escape a fox.

It is usually the other way around. Cats chase foxes away from their territory.

In this article, you will learn if foxes attack and eat cats, and under what circumstances it happens.

Yes, foxes can attack cats, especially when they are starving. Foxes do generally not attack cats, as they prefer to eat mice, rats, rabbits, or birds. Cats that end up being attacked by foxes are usually kittens, old, or sick.

Most foxes don’t pose a danger to cats. But urban red foxes do.

They have adapted to city life and consume anything that doesn’t take much effort to catch. This is the case with kittens, seniors, and sick cats.

These cats are easy targets for foxes because they don’t have the energy or strength to run away or fight. As a result, a hungry fox that meets a sick cat is likely to attack it.

Foxes also attack cats if they feel threatened or to protect their cubs. This also rarely happens. It only happens when the cat gets too close to the fox’s den or the cubs playing outside.

Nevertheless, if the cat is healthy and fierce, the interaction happens the other way around. The cat will chase the fox to scare it away.[1]

Yes, foxes eat cats on occasion. They are opportunistic predators and will eat weak cats. Foxes also attack cats because they feel threatened. But it is rare as foxes are shy animals that prefer to flee rather than fight.

A robust adult cat will never fall prey to a fox.

Young, old, and sick cats are the ones hunted because they cannot defend themselves. They are also too weak to run away.

When foxes are starving, they can attack cats, dogs, or chickens in the coop.[2] If you live in an area with foxes, keep an eye on your pets and build an anti-fox chicken coop.

Because foxes eat anything they can find, they also eat dead cats. If a cat was hit by a car and died, and the a finds it, it is possible that the fox will eat the remains.

What do Foxes Eat?

Foxes are omnivorous mammals that feed on meat, bones, fish, eggs, plants, insects, fruits, and vegetables. Foxes’ favorite foods are small rodents (such as mice and rats) and birds.

Foxes are omnivorous animals that feed on almost everything:

Their diet also depends on the region where they live. Urban foxes feed on food scraps and meat, while arctic foxes feed more on meat and roots.

Baby foxes are also often confused with kittens as they have yet to develop a pointy nose and triangular face.

Nevertheless, foxes and cats are two completely different species from two different families. Cats belong to the Felidae family, and foxes to the Canidae family.

Even if foxes resemble cats, the anatomy and nutritional needs of foxes are the same as dogs, and not cats.

How Are Foxes Different From Cats?

Foxes differ from cats in many ways, aside from their physical traits.

Do Foxes and Cats Get Along?

Foxes are indifferent to cats and vice versa. They do not get along, but they also don’t kill each other. However, there are cases when foxes are defensive towards cats, especially if they are with their cubs.

Foxes don’t particularly get along with cats, but neither do they fight when they see each other.

In cases where a female fox is with her cubs and a cat passes through the area, she may scream loudly or try to attack the cat to chase it away.

Most of the time, foxes ignore cats and even feel intimidated by them.

If foxes are hungry, looking for food, and meet a kitten or sick cat on the way, they will most likely attack and eat it.

Yes, foxes do kill cats, but it rarely happens and only in extreme situations. Foxes attack and kill cats when they are starving or when the cats get too close to the den where they keep their kits.

Can a Fox Eat a Cat?

Yes, a fox can eat a cat. It happens less frequently than with birds, but it’s not that unusual either. Especially if the cat is small, sick, or old. If you live in a wooded area, the chances of a cat being eaten by a fox are higher.

How Often Do Foxes Encounter Cats?

Foxes can encounter up to several cats each night, especially those that live in urban areas. Foxes in the wild rarely meet wild cats as they tend to avoid each other.

Are Foxes Scared of Cats?

Foxes are not afraid of cats, but they can feel intimidated by them. Most of the time, foxes are indifferent to cats and vice versa. Foxes will attack a cat if they feel their cubs are in danger or if they are extremely hungry.