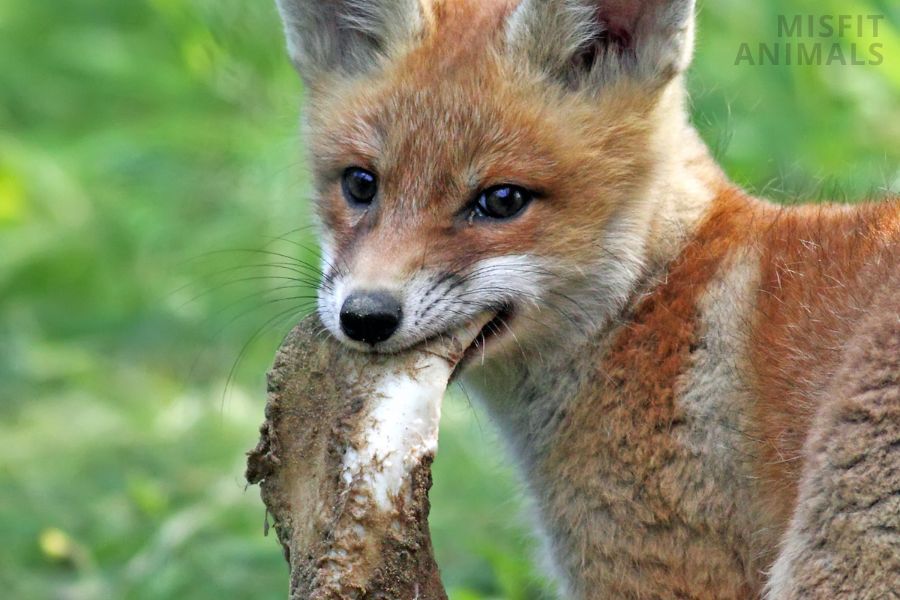 Foxes are omnivores and eat both meat and plants, including small mammals, birds, eggs, fish, crustaceans, worms, fruits, vegetables, seeds, and mushrooms. Their favorite foods are mice, rats, and birds. They kill their prey by biting hard on the back of the neck to sever the cervical vertebrae.

Foxes are one of the most famous wild animals, often encountered as villains in children’s stories.

These mammals are great at adapting, which is why they are found from the Siberian tundra to crowded cities.

Their natural habitat is represented by the plains mixed with forests, but you can also find them in the desert, high mountains, and even cities.

The urban fox (city fox) thrives and is able to cope in an environment close to humans.

Regardless of the location, foxes are great hunters and foragers. A good example is the Arctic fox, which stores food to eat during cold winters to survive.

In this article, you will learn about what different fox species eat, how foxes kill their prey, and much more.

There are several genera and species of foxes, which are distinguished by their fur length, color, and density. The most well-known are arctic foxes, Fennec foxes, and red foxes. There is also the crab-eating, south-American gray fox, bat-eared fox, and others.

Foxes are part of the Canidae family and are related to dogs. There are several genera and species of foxes that differ in body size and the color, length, and density of the fur.[1]

The most commonly known are:

Fennec foxes have a small body, large ears, and short, sand-colored fur and live in the desert.

Arctic foxes have a small body and small ears and thick white fur and live in the Arctic and alpine tundra.[2]

Red foxes are the most widespread species; they have a large body, long red fur, and small ears (compared to the Fennec fox).

Related: What Is a Fox?

There are numerous species of foxes divided into several genera, but the genus Vulpes is the only one that contains true foxes:

Other genera containing foxes (that are not considered true foxes are):

In the end, all foxes are omnivores and feed mainly on meat and bones, insects, fruits, plants, and seeds, regardless of whether they are true foxes or not.

What Do Foxes Eat in the Wild?

Foxes are omnivores, meaning they eat almost anything they can find, including animals, insects, crustaceans, plants, fruits, seeds, or mushrooms. Depending on their region and food availability, different species eat different things. For example, arctic foxes feed more on meat and roots.

Foxes are omnivorous animals, meaning they eat almost anything they find.

In the wild, foxes consume the food that prevails in the region where they live, which commonly includes the following:

What Do Arctic Foxes Eat?

Arctic foxes eat almost anything they come across, especially animals, dead or alive. Their main prey is based on rodents, such as lemmings, voles, and mice.

In the summer, arctic foxes start making provisions for the coming winter. They gather extra food and bury it in the ground for safekeeping.

If they do not have enough food in the winter, they follow larger predatory animals (bears or wolves) and eat what from the carcasses they leave behind.

Arctic foxes use their excellent hearing to detect movement under the snow. When they hear movement, they jump on the snow to break it and catch the animal below. They then place their front paws on the prey to catch it.

What Do Red Foxes Eat?

The red fox is the most frequently encountered species of fox. It has a varied diet that includes meat, eggs, plants, seeds, and fruits.

A survey carried out in Russia concluded that red foxes consume over 300 different types of animals and plants.[3]

The diet of red foxes consists of 100% fruit in autumn.

What Do Fennec Foxes Eat?

Fennec foxes live in desert regions and hunt at night. This species of fox feeds on small animals, as they themselves are small:

Fennec foxes can go without drinking water for long periods, as most desert animals do.[5]

What Do Foxes Eat in the City?

Foxes that live in cities have a varied diet:

City foxes can attack and eat pets, but this is very rare. They usually attack puppies, kittens, sick, or old animals that aren’t able to fight back or run.

What Do Pet Foxes Eat?

Pet foxes should eat a diet similar to one of the wild foxes. Foxes kept in captivity do benefit from raw, fresh meat, as it is rich in taurine. Part of their diet can be made up of high-quality dog food, but they benefit from fresh deer, fish, or other meats.

Domesticated foxes should consume meals rich in taurine. Taurine is an amino acid that the body does not synthesize on its own and must be taken from food or supplements. Meat is a rich source of taurine.

Foxes kept as pets should eat a diet similar to wild foxes. It should include mice, small rats, and other rodents.

In addition to meat, pet foxes should also eat the following supplements:

Do not feed pet foxes grain, such as wheat, rice, or oats. These carbohydrates can cause health problems.

Pet foxes may want to eat sweets or other human foods, but these foods are bad for foxes. It is recommended to keep your fox’s diet as close as possible to that of wild foxes if you do not want your pet to get sick.

Can You Feed Foxes in Your Garden?

You can feed foxes in our garden if you want to keep them around, but it’s not recommended.

Even though they are omnivores, foxes love meat. So if you want to make friends with a fox and want it to visit you constantly, leave out some raw or cooked meat or canned food for dogs.

Foxes can also have peanuts, cheese, or eggs.

What Do Baby Foxes Eat?

Baby foxes feed on their mother’s milk until they are four weeks old. After this age, they can eat regurgitated meat from their mother. When they grow up, they feed on live prey their mother hunts, such as mice and insects. Fox cubs are completely weaned at the age of 12 weeks.

Baby foxes are born blind and deaf. Until two weeks of age, baby foxes feed on their mother’s milk.

Cubs are fully weaned at 12 weeks of age. Until seven months old, they stay with their mother, which teaches them how to hunt.

After this, cubs leave the nest and survive on their own.

What Is Foxes Favorite Food?

Foxes’ favorite food depends on the season, but they prefer meat and eggs from small mammals, such as rodents, over plants.

A fox’s favorite food is seasonal. Although foxes prefer to eat small rodents and rabbits, they are also satisfied with birds, frogs, or fruits. They also like bird eggs.

During the autumn, red foxes almost feed exclusively on fruit.

How Do Foxes Kill Their Prey?

To kill their prey, foxes bite the back of the neck to sever the cervical vertebrae. Foxes have long and sharp canines that they use to bite the neck of their prey to kill it. They need to bite larger animals multiple bites to kill them.

Foxes have large ears in proportion to their heads, which gives them great hearing. They are able to detect prey without having to see it.

They do not run after the prey like cheetahs but jump on it with their front paws (especially in the case of small mammals), like cats.

To kill the prey, foxes bite the back of the neck with their long and sharp canines. It often takes several bites to kill the prey. The prey dies due to the separation of the cervical vertebrae.

Foxes usually hunt more than they can eat but when they have cubs, they carry the prey to their den.

Foxes can eat cats, but it rarely happens. This only occurs when they can’t find anything else to eat. Foxes attack and kill kittens and old or sick cats. But foxes seem to enjoy plants, seeds, fruits, or vegetables more than cats.

Yes, foxes eat vegetables, especially domestic ones. Wild foxes can eat corn, carrots, or mushrooms if they find any, although they prefer fruits and meat. Foxes also eat grass, leaves, and plant roots.

How Often Do Foxes Eat?

Foxes eat when they find prey or when they are hungry. They consume around two pounds of food per day.

Yes, foxes eat bird seeds if they are hungry enough. Foxes often pick the sunflower seeds out of bird food. Foxes can also eat the peanuts you leave out for squirrels. These canids are most likely attracted by the smell of the animals that come to eat the seeds or nuts.