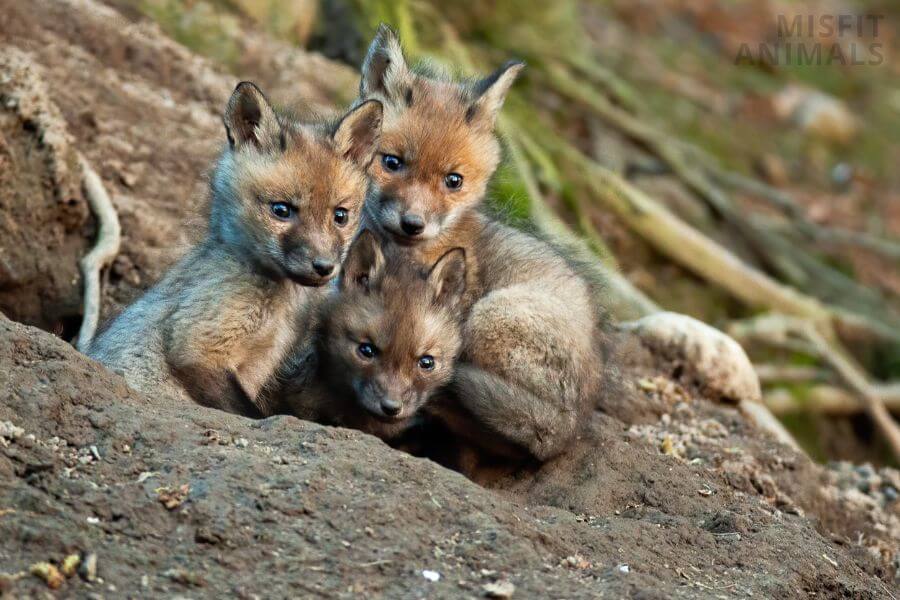 Foxes live everywhere in the world except Antarctica. They are found in forests, mountains, deserts, and snow. They live in dens that they either dig, steal, or inherit. In these dens, foxes protect themselves from heat, cold, or rain, store food, and raise their young.

Foxes are found all over the world, except in Antarctica. They are especially found in areas with mixed landscapes with forests and plains, but also in mountains, deserts, or regions with a lot of snow.

They dig dens in the ground, under large stones, in caves, snow, or sand. Sometimes, they even steal dens from other animals or inherit them from their parents.

The red fox is the most widespread species of fox and can be found even in urban areas and suburbs.

In this article, you will learn more about where foxes live, what habitats they inhabit, and more.

Where Do Foxes Live?

Foxes live all over the globe, except Antarctica. They are mainly found in mixed areas with forests and plains, but you can also find foxes in mountainous, desert, or snowy regions. This varies depending on the species.

There are six genera with 23 types of foxes, but only 12 of them are considered true foxes. Different species live in different regions.

Foxes generally prefer mixed regions with forests and plains, but you can also encounter them in the arctic tundra, mountains, or deserts.

Red foxes are the most widespread fox species, as they easily adapt to new environments. This is why they are also found in urban areas and suburbs.

The natural habitat of foxes depends on the species. Foxes can live anywhere on the globe, except Antarctica, from forests and plains to deserts, mountains, and snowy regions.

The most common fox habitats are forests, pastures, and grasslands. Several fox species live in these areas because they offer a rich and varied source of food.

These habitats have plenty of prey animals, fruits, and other plants that foxes eat.

Although they are harsh habitats, some foxes, such as the arctic fox, have adapted to the conditions. In addition to arctic foxes, some red foxes also live in these cold environments.

Temperatures reach -29.2°F (-34℃) in these regions, and large parts of the land are covered by permafrost.

Arctic foxes make their burrows in the snow to hide food, protect themselves from the cold, and raise their young.

If food is scarce, red foxes resort to hunting and eating arctic foxes.

Many foxes live in the desert, one of the hottest and driest environments in the world. These foxes are called desert foxes, and they have adapted to high temperatures and little water sources.

If temperatures drop below 68˚F (20℃), some foxes begin to shiver because they’re used to the heat.

During the day, desert foxes hide in their dens from the heat outside while they go hunting at night. They make their burrows in large and stable sand dunes.

Some foxes are found in mountains, plateaus, or on the slopes. This includes the Tibetan fox and the Culpeo fox.

The Tibetan fox can live at heights of 11500-17000 feet, as they have adapted to the cold temperatures and low oxygen levels.

Foxes find all the conditions they need for survival in these regions such as:

Yes, foxes live underground in dens. They also live under big rocks and in caves. All foxes dig dens. They dig their dens in the ground, sand, or snow, depending on the species.

Foxes build their dens underground, but they sleep outside. While they usually dig their own dens, they can also inherit them from their parents or steal them from other animals.

The dens serve as food storage and a place to raise their young. Foxes also hide from the bad weather and predators in their burrows.

They rarely choose to sleep in their dens, preferring to do so outside near their den. This way, they can keep an eye out for predators.

Not all foxes have threatened habitats. The greatest threat to foxes is humans.

Besides the fact that humans hunt them, decimating the population, they also destroy their habitat through construction and deforestation.

The destruction and loss of habitat have resulted in some endangered fox species:

Some foxes, such as the red fox, have managed to adapt to new living conditions, which is why they are seen around big cities and suburbs.

Foxes live everywhere in the world, except Antarctica, from plains and forests to snow, ice, and sand. They dig their dens in the ground, snow, or sand, but they can inherit them from their parents and steal or borrow from other animals.

Where Do Foxes Live in the World?

Foxes are found everywhere in the world, except for Antarctica. There are 23 species of foxes, and their habitat depends on the region where they live. Most foxes live in mixed areas with forests and plains, but you can also encounter them in the desert, mountains, or snowy regions.