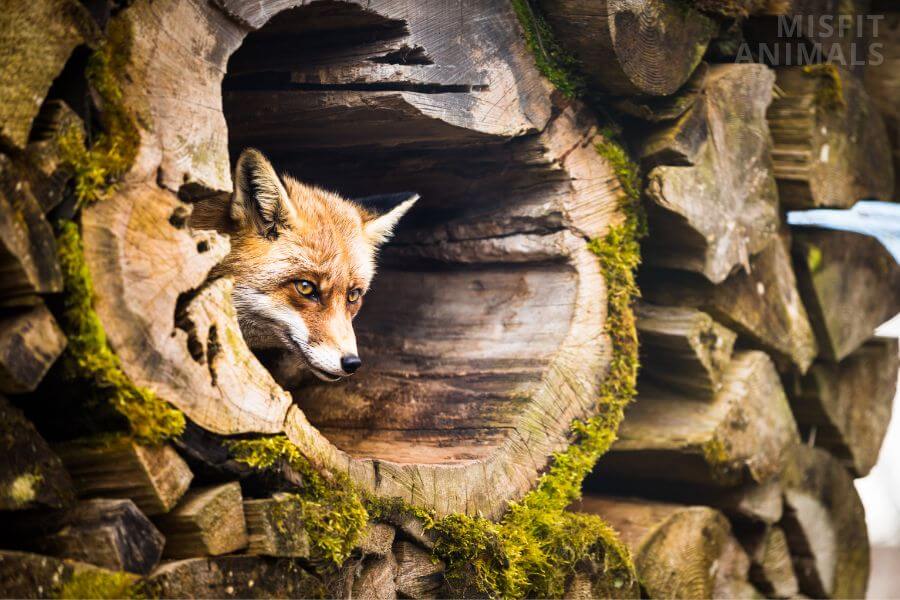 Foxes dig dens to raise their young and store food. Some species of foxes also sleep in their dens. Their dens, or burrows, have several exits so they can escape predators. They dig their burrows in the ground, sand, or snow, depending on the species and area they live in.

Foxes dig burrows. These are also known as dens.

These dens serve as pantries for food and nurseries for their offspring. Foxes rarely choose to sleep in their dens. They prefer to do it outside, near their burrows, to keep an eye out for predators.

Foxes usually dig their own dens, but they can also inherit, steal, or borrow them from other animals (especially badgers).

They usually dig their burrows in areas with vegetation, near water, under trees, or large rocks. If you see a hole in the ground the size of a fox, it is probably a fox den.

In this article, you will learn where foxes live, if they dig burrows, how big their dens are, if foxes stay in the same burrow, and much more.

Where Do Foxes Live?

Foxes are found all over the globe in all regions. Most foxes live in areas with forests and plains, but there are also desert and arctic foxes. They live in dens or burrows that they make themselves.

Foxes are adaptable animals. Because of this, they are widely spread around the globe. There are 23 types of foxes that can be found in different areas of the world.

Most foxes live in mountainous areas, forests, or plains, but there are also desert foxes (e.g. the Fennec fox) and arctic foxes.

Arctic foxes live in cold climates in the far north, while desert foxes are found in regions with extremely high temperatures, such as the North African desert.

The red fox is the most widespread species of fox and lives in mountainous or forested areas. These foxes are extremely adaptable, being able to survive even in crowded cities.

Depending on where in the world they live, they take residence in different places. Foxes in cold regions hide in dens more often than those living in temperate climates.

Yes, foxes dig their own dens, which are also called burrows or fox earths.  Foxes can also inherit dens from their parents or pack members, or steal or borrow those made by other animals. They especially steal burrows from badgers.

Foxes generally dig their own dens, but they can use the abandoned burrows of other animals, which they then modify.

These canids are known as lazy diggers because they prefer the burrows of other animals, such as badgers, instead of digging their own.[1]

Some fox dens are hundreds of years old because foxes tend to reuse the same burrow for generations.[2]

Foxes also borrow the dens of other animals for a short time if they feel in danger or if there are unfavorable weather conditions.

Fox dens are made up of a main tunnel and several small rooms where foxes raise their young and store food. Most dens have several entrances and exits to escape predators.

Fox dens are made up of several components:

The den starts with an entrance that leads into a tunnel. This then leads to the main room and splits out into several smaller rooms.

The number of rooms depends on the size of the pack: the more members in the pack, the more rooms foxes dig. The rooms are used to raise their young and store food. Most of the time, foxes sleep or rest in these rooms to be close to their cubs.

The baby foxes stay in the main room, which is located at the end of the tunnel. The room used for food storage is located closer to the entrance.

Some foxes dig extra tunnels and create additional entrances and exits, either for extra space or extra safety.

Foxes choose the size of their den depending on how many cubs she has. She needs enough room to give birth and keep all of her cubs safely.

How Deep Is a Fox Den?

Fox dens are typically between 10–20 feet deep, depending on the need. The more dugout areas and excavated rooms, the deeper the den is. Fox fens can reach up to 75 feet deep.

The size of foxes’ dens depends on the species of fox and the geographical area in which it lives.

There are some general assumptions about fox den depths:

The main rooms (where foxes raise their young) are generally 3-8 feet deep.

The main entrance of the den is about eight inches in diameter, and the additional entrances are as small as four inches.

Fennec foxes dig more complex burrows than other species. These have long tunnels and up to 15 entrances.[3]

Do Foxes Return to the Same Den?

Yes, foxes use the same den as long as possible. If they leave their den because of predators, they will return to it when the danger has passed.

Most foxes use the same den year after year. They do this for hundreds of years over multiple generations.

As long as they feel safe or the den is not destroyed by weather conditions or humans, foxes do return to the same den.

Do Foxes Have Multiple Dens?

Yes, foxes can have multiple dens. It helps them hide from predators or bad weather quickly, makes sure they have a place to rest if they traveled far for food, or enables them to have a spare den to move their young.

These secondary dens can be in or out of their territory range, but foxes always avoid areas where there are predators or other foxes.

If food is not abundant, foxes search for it outside their territory. After foraging, they need to take shelter and rest and will do so in the abandoned dens.

When the seasons change, it is also useful for foxes to have a spare den to move the babies when needed.

When there are many individuals in the same territory, foxes can also share the same den with other foxes. Females that have the same male partner can also live in the same den, giving birth to their young there.[4]

How Long Do Foxes Stay In Their Den?

Adult foxes stay in their dens during the mating season and when they are raising their young. They also use the den when the weather is bad, but this is only for a short time.

Most foxes rarely rest or sleep in the den, as they do so outside. This makes it easier to hear predators or other threats.

Fox kits stay in the den with their mother for 4-5 weeks, until they are big enough to eat solid food. They only go outside to play, staying near their burrows.

How to Find a Fox Den

Foxes dig their dens most often near water sources. Look for dens here. Search for holes that are eight inches in diameter or as big as a fox and see if there are feces and bones at the entrance. If the den is in use, you will get a strong smell of urine.

Foxes mark their territory with urine, so a good way to start your search is to rely on your sense of smell. When you are near a fox den, you will feel a strong smell of urine.[5]

They also defecate near their dens, so you will see or smell feces.

Another sign that you are close to a fox den is the presence of bones and food remains. Foxes keep their dens somewhat clean and will either eat or dump their trash outside.

You can also look for signs of foot traffic. If you find fox tracks, follow them. They can lead you to the den.

Do Foxes Live in Caves?

Foxes live in caves if they dig their dens there. Foxes dig their burrows in the ground, under stones, caves, sand, or snow. They will modify the dens they steal according to their needs, which can occur in caves.

Why Do Foxes Dig Holes?

Do Foxes Stay in the Same Area?

Yes, foxes stay in the same area as long as it is safe. If there’s a lack of food, foxes will leave their territory to search for it but return to their burrow. Foxes use the same den year after year, for generations, if the survival conditions are favorable.

Do Foxes Move Their Dens?

Foxes do not move their den except when they are attacked or the weather conditions are bad. Most foxes have several dens, which they use to move their young, rest when they are not in their territory, or hide from predators.

How Far Do Foxes Travel From Their Den?

Foxes travel up to 1.5 miles from their den in one night. Male foxes can travel even more when they are in mating season (autumn and winter), and female foxes, in summer when they are looking for food for their young.

Do Foxes Store Food in Their Den?

Yes, foxes store food in their den. They store in the room closest to the entrance. If they gather too much food, foxes build another room for it. Foxes usually kill more prey than they can eat.

How Many Foxes Live in a Den?

A pair of foxes and their cubs usually live in a den. There are cases when two female foxes can share the same den if they have mated with the same male. A fox den usually stays in the family for generations.

How Big Is a Fox Hole? (the entrance)

A fox hole (the main entrance to the den) is as big as a fox or about eight inches in diameter. The additional holes the fox digs are smaller (~4 inches).