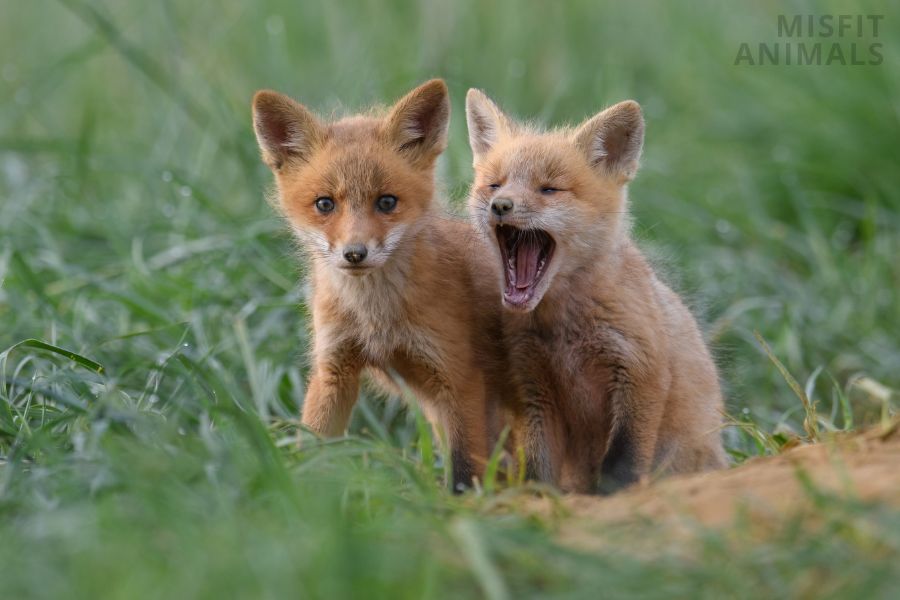 Fox cubs are called kits, cubs, or pups. They are born blind and deaf and depend on their mother for food and protection until they are weaned. At 4-5 weeks of age, fox cubs start to venture outside the den during the day to play and explore. The mother stays with the cubs in the burrow until they grow up.

Female foxes have only one heat cycle per year. In most fox species, the males are monogamous, mating only with one female.

Mating takes place in winter and spring, and after 53 days of gestation, the baby foxes are born.

When they grow up, fox cubs come out of the den during the day to play and explore. They quickly gain keen senses, like their parents.

But before that, they are still small, baby animals. Read on to learn more about baby foxes, what they’re called, what they look like, how they grow, and more.

What Is a Baby Fox Called?

A baby fox is called a kit, cub, or pup, and a group of fox kits is called a litter. The term “kit” is used most often, not to be confused with the kit fox, which is a fox species.

Foxes are part of the same family as dogs, wolves, or coyotes: the Canidae family. As with other offspring of this family, baby foxes are commonly called pups, cubs, or kits.[1]

Do not confuse fox kits with kit foxes, which is a fox species.

The most used term for baby foxes is “kit”, a term also used for baby skunks, muskrats, or beavers. Baby foxes are also called “cubs”, a term used for baby pandas or raccoons as well.[2]

Here are some other names for foxes:

Fox babies are born blind, deaf, and with fur. After 10–14 days, their eyes and ears open, and the first teeth appear in the upper jaw. The teeth in the lower jaw appear after two weeks. The kits change their coat color during the first shedding.

Fox cubs are born in the spring. They are deaf and blind as both their eyes and ears are closed. They don’t open until after 10–14 days.

Baby foxes are small at birth, weighing around 120 grams.[4]

At this stage, fox babies resemble housecat kittens and are often confused with them.[5]

At the age of 10-14 days, the ears and eyes open, and they have grown to around 350 grams. Their eyes are initially blue but change into brown or gray as the cub gets older.

Kits are born with hair. The first layer of hair is fuzzy and soft. For red foxes (Vulpes vulpes), the characteristic color pattern begins to appear after four weeks. At this stage, young foxes look a lot like their parents.

At the end of summer, the cubs have fully grown fur and are ready to hunt.

What Color Are Baby Foxes?

Baby foxes are usually white, gray, or black, depending on the species. Red fox pups are charcoal-gray or black at birth, but they change color after the first shedding.

There are 23 species of foxes, and each species can have multiple colors thanks to color mutations.

Hence, the color of fox cubs depends on the species:

Desert foxes usually don’t change color when shedding, and if it does, the difference is not significant.

Fox babies are born blind and deaf. These senses develop after two weeks. At the age of four weeks, the fur pattern characteristic of the species begins to appear, and after a few months, they are sexually mature and ready to leave their family.

Although there are many species of foxes, their biological cycles are similar. Many foxes also have approximately the same lifespans of 7-14 years.

The biological cycle of baby foxes begins on day zero and ends when they are fit for reproduction at 7–10 months old.

Where Do Baby Foxes Live?

Most fox kits live in the den until they are 4-5 weeks old, after which they start going outside to play and explore. They leave their den for good at around 10 months of age.

Fox kits are born in a fox den. The parents either dig, steal, or inherit a den. They live there until they are ready to fend for themselves.

Until the age of two weeks, baby foxes stay in the den at all times. They are completely dependent on their mother for food and protection.

At the age of 4-5 weeks, they start to venture out of the den during the day. They explore and play while their mother watches over them.

Fox cubs leave the nest for good when they are sexually mature, around 10 months old. Although the majority choose to leave, some individuals remain in the same burrow throughout their lives.

What Do Baby Foxes Eat?

Fox kits feed with their mother’s milk until they are 8-10 weeks old. After this age, they can eat solid food.

Foxes are omnivores, meaning they feed on plants and meat:

From a young age, fox kits copy their parents and begin to hunt insects, and then move on to small mammals. Eventually, they eat a regular fox diet.

The biggest risks for baby foxes are abandonment and predators. Other risks include accidents and diseases.

As with most baby animals, fox kits can’t fend for themselves. They face a lot of risks, especially during the first few months until they learn how to hunt.

Here are the most common risks baby foxes face:

If baby foxes are abandoned before they learn to hunt and fend for themselves, they are predisposed to starvation and will die of hunger. After abandonment, fox cubs live without their mother’s protection and are also exposed to predators.

If the kits venture too far from their den, they can be hit by cars or eaten by predators.

The most common disease among fox cubs is parvovirus. An often fatal disease that can affect several mammals, including foxes, dogs, and cats.

How Big Are Baby Foxes?

Baby foxes weigh around 120 grams at birth and are approximately four inches long. After two weeks, they triple their weight. When they become adults, they weigh 15-31 pounds and are 18-35 inches long.

What Sounds Do Baby Foxes Make?

Baby foxes usually cry, while adult foxes shout, scream, and bark. They can even sound like babies crying.