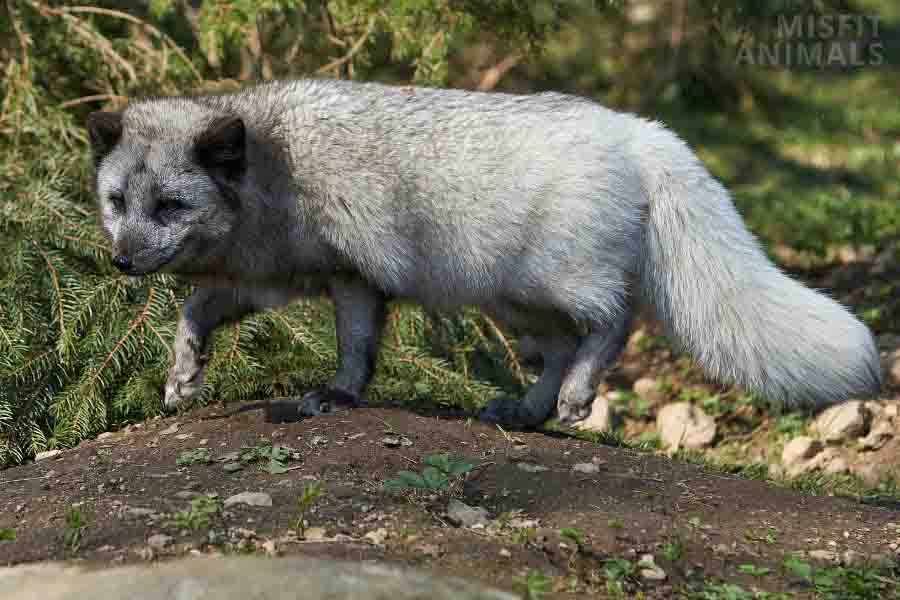 There are 23 fox species, each with different colors. Some foxes, such as red and arctic foxes, change color depending on the season. Other foxes, such as Fennec foxes, keep their color throughout the year. Some foxes get unusual colors from mutations.

Most people think of foxes as red or white. But foxes have many more colors than that.

There are 23 fox species, each having its own range of colors. Within the same species, there are several color varieties, also known as color mutations.

Some foxes change color depending on the season and the shedding period, while others maintain the same color throughout the year.

In this article, you will learn how many colors foxes have, what are color mutations, why arctic foxes change their color, and more.

How Many Colors of Fox Are There?

The color of foxes is unique to each species and varies within the same species. Some foxes change their color several times a year, while others maintain the same unique color for the rest of their lives. This is why it’s difficult to identify a fox species by color alone.

There are 23 species of foxes, of which 12 are considered true foxes. Each of these species has a specific color, with multiple color varieties.

For example, the red fox is generally red or orange but can also be black, brown, silver, mixed, etc.

These color mutations occur naturally or are the product of breeding programs on fur farms.

Most foxes change colors as they transform from cubs to young adults and have several shedding cycles. Fox kits are born in one color, which changes after they grow into young adults.

Other adult foxes change their color several times a year, depending on the season and the shedding period.

Good examples for this are red and arctic foxes as they molt before the hot season. It helps them cope with the heat, but also changes the color of their coat.

Desert foxes usually keep their color throughout the year. Some individuals change their coat color slightly when shedding.

The red fox species has several color mutations. They can be black, brown, silver, white, or classic red mixed with another color. These are called “cross foxes” – for example, a cross between red and silver.

Red and orange are the most common colors of red foxes (Vulpes vulpes). This color varies from bright red to light orange, depending on the shedding season.

Red foxes can also have other colors, such as brown, black, silver, etc., or a mix of red and other colors (e.g. red with silver).

All silver foxes have black hairs, while some black foxes have a little silver in their coat. There are also completely black foxes.

Regardless of the color, red foxes’ coat color comes from certain mutations: [1]

Mutations (also called morphs) are color variations that occur in some species of foxes, including red and arctic foxes. Some mutations occur in the wild, while others are the result of fox breeding programs on fur farms.[2]

In brown mutations of the red fox, their classic red-orange color is replaced with shades of brown. There are many different brown morphs and mutations.

Foxes with the red mutation are cherry red. The fur color varies from reddish-orange to dark red. For this color variety, the fur inside the ears is dark red, instead of white or yellow like the classic red color.

Foxes with the gray color mutation come in many different forms, depending on what other genes they carry. They all have a gray hue, light or dark.

Any solid color can come as a marbled variety. Their coloring is reminiscent of stone marble. These foxes are white with fine marble-like black, gray, or brown stripes.

Any solid color morph can come as a Georgian variety. Georgian foxes have white fur with spots of other colors on the head, along the spine, and on other parts of the body.[3]

It is also called the Ph factor in the US.[4]

Any solid color can come as the Whitemark variety. Foxes with this trait have a narrow light stripe from the muzzle and to the forehead. It can also reach the back of the head.

All solid colors can come in the platinum variety. This color variation also causes a stripe, similar to the Whitemark mutation. The difference is the color of the coat, as the platinum gene has a diluting effect.

Cross color variations occur after mating cross foxes (such as red with silver) with another color variety:

Apart from the already-mentioned color variations, mutations, and morphs, other mutations have also been observed. These include the Dakota gold foxes, Autumn gold foxes, and Cinnamon red foxes.

Apart from these basic colors, there are a dozen different color mutations[5], all created by man.

Why Do Arctic Foxes Change Color?

Arctic foxes change color because they shed their fur before summer. The white polar foxes change their color to brown, and the blue-gray ones become a lighter shade of gray.

Desert foxes keep the same color throughout the year. Sometimes, when they shed, they slightly change their coat color shade, but the difference is insignificant.

Desert foxes come in many shapes and sizes, the most popular being the Fennec fox.

These foxes generally have shades of cream and tan or peppered colors similar to gray foxes, such as the bat-eared fox.

Most desert foxes do not change their coat color when they shed, and if they do, the color difference is not significant.

Yes, blue foxes are real. They are color mutations of red and arctic foxes. The Alaska blue fox is native to the islands and peninsulas of Alaska’s southwest coast.