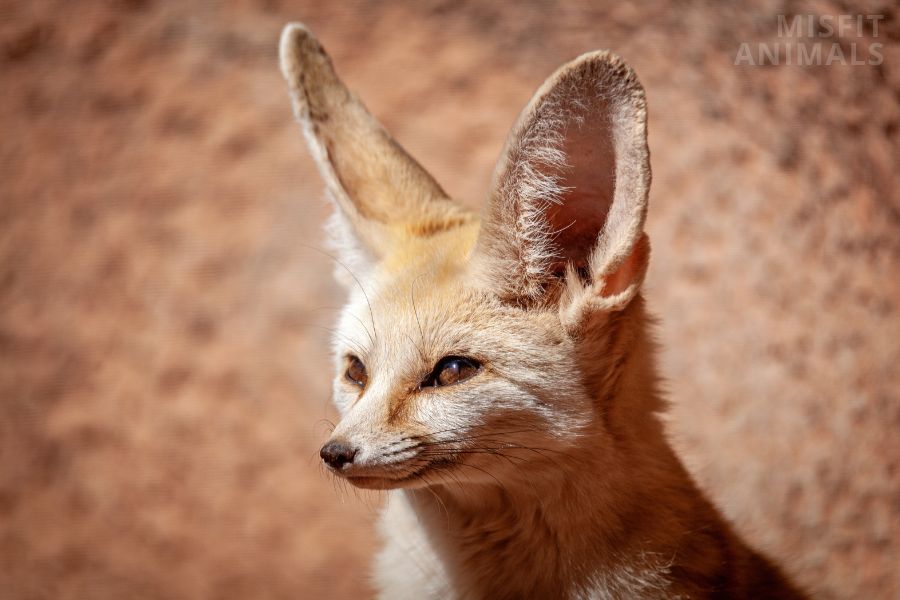 Fennec foxes are the smallest fox species. They live in Africa in the desert and are also called desert foxes. They are crepuscular-nocturnal animals that hunt at night. They feed on insects, small animals, fruits, and plants. Fennec foxes are not considered an endangered species.

The Fennec fox is a small mammal with giant ears. It is the smallest fox in the world and lives in the deserts of Africa. It is also called the desert fox.

This fox digs its den in the large and stable sand dunes, where it shelters from the heat of the day and raises its young.

Fennec foxes have a behavior similar to dogs. Because of this, many people have started breeding Fennec foxes and keeping them as pets.

In this article, you will learn what a Fennec fox is, what it eats, its natural behavior, and many other interesting facts.

The fennec fox is the smallest fox in the world, measuring up to 16 inches long without the tail and weighing 3.5 pounds. They are crepuscular and feed on insects, meat, and plants. They live in North Africa in the wild.

Fennec foxes are small mammals from the Canidae family, the same family that includes dogs, wolves, coyotes, and other fox species.

They measure between 12-16 inches long, without the tail, and 3.5 pounds body weight.

Fennec foxes are one of the 12 species of true foxes, from the genus Vulpes.

They live in North Africa, in the Sahara desert, the Sinai Peninsula, and Arabia and dig dens in stable sand dunes. They use their dens for several activities:

Fennec foxes are omnivores and feed on:

They rarely need to drink water, as they get water from their food.

Fennec foxes are long-lived, with one of the longest lifespans of all foxes. They live up to 10 years in the wild and 14 years in captivity.

The Fennec fox has the characteristic features of a fox: triangular head, pointed muzzle, thin body, large and triangular ears, and a bushy tail. They reach up to 16 inches long without the tail and 3.5 pounds body weight. They are approximately eight inches tall.

The Fennec fox is the smallest fox species, reaching a maximum of 3.5 pounds body weight and 16 inches length without the tail. The tail can reach 8-12 inches.

The large ears of the Fennec fox make them unique compared to other fox species. The ears of a Fennec fox can reach 6-8 inches, as tall as their bodies.

In the desert, temperatures reach up to 100°F (~38℃) during the day. The large ears of Fennec foxes help regulate their body temperature as they expel a lot of heat.

They have thin bodies covered with cream-beige fur. Their fur is soft, thick, short, lighter on the belly, and reddish on the back. They typically also have some black spots on the back and tail.

The feet of Fennec foxes are also covered with fur to protect them from the hot sand.

They also have scent glands on the tips of their tails that produce a musky smell when frightened.[4]

Fennec foxes live in the desert of North Africa. You can find them from the Sahara desert to the Sinai Peninsula and Arabia. They dig dens in the stable sand dunes to avoid heat and predators, store food, and raise their young.

If the temperatures outside drop below 68˚F (20°C), Fennec foxes start to shiver and can get sick. They can’t handle cold weather.

They dig dens in the stable sand dunes which they use for several things:

Fennec foxes stay in their dens during day time and go hunting at night. Their dens can be three feet deep.[8]

Fennec foxes are social animals. They purr like cats when they are happy. If they feel threatened or stressed, they emit a musk-like characteristic smell as a defensive mechanism.

Fennec foxes are nocturnal, meaning they hunt at night. They hunt almost all kinds of animals or insects, as long as the prey is smaller than themselves.

They are cautious when they go hunting and can jump up to 60 cm to escape predators. Foxes can also jump this high when attacking the prey with their front paws.

Unlike other fox species, Fennec foxes live in groups called skulks. A skulk consists of a maximum of 10 individuals. They live in separate or connected dens.

As pets, Fennec foxes are friendly. They don’t have problems with strangers either, but they can become tiresome with other pets as Fennecs want to play a lot.

As wild animals, Fennec foxes are generally not good pets.

Although they are wild animals, they become sociable and calm animals once they are tamed. They are not particularly cuddly and are even skittish at times.

It is important to keep them on a leash so they do not run away. Their enclosure must also be well fenced and closed. They often dig tunnels or climb fences to escape.

Fennec foxes are omnivores, meaning they eat both plants and meat. They feed on insects, small mammals, plants, fruits, roots, and eggs. They detect prey with their sensitive sense of hearing and can live with little or no water for long periods.

Fennec foxes are omnivorous predators that feed on a variety of foods:

These canids can live with little or no water for long periods, as they get enough moisture from the food they eat.

Related Article: What Do Foxes Eat?

Fennec foxes have several natural predators such as the eagle owl, hyena, jackal, domestic dogs, and other large mammals.

Among the natural predators of Fennec foxes are many animals:

The eagle owl or Verreaux’s eagle-owl is the main enemy of Fennec foxes. It lives in the African desert and is the largest owl in this region. It can reach a size of 26 inches (66 cm) long.

This owl can carry prey of up to 3.6 pounds body weight with its sharp and strong claws.[9]

Another major threat to Fennec foxes is humans who hunt them and sell them for their fur.

Their habitats are also threatened in some regions. Due to the expansion of human settlements, some Fennec foxes are on the verge of losing their habitat.

How Much Does a Fennec Fox Weigh?

How Many Babies Do Fennec Foxes Have?

Fennec foxes usually give birth to 2-5 cubs per litter, the average being three. Like other fox species, Fennec foxes only have one heat cycle per year. The mating period is in spring and lasts 4-6 weeks. During this time, the males mark the territory with urine and become aggressive.

How Many Species of Fennec Fox Are There?

There is only one Fennec fox species. There are 23 fox species in total, of which 12 are considered true foxes. The Fennec fox is part of the true foxes, which are foxes of the genus Vulpes.