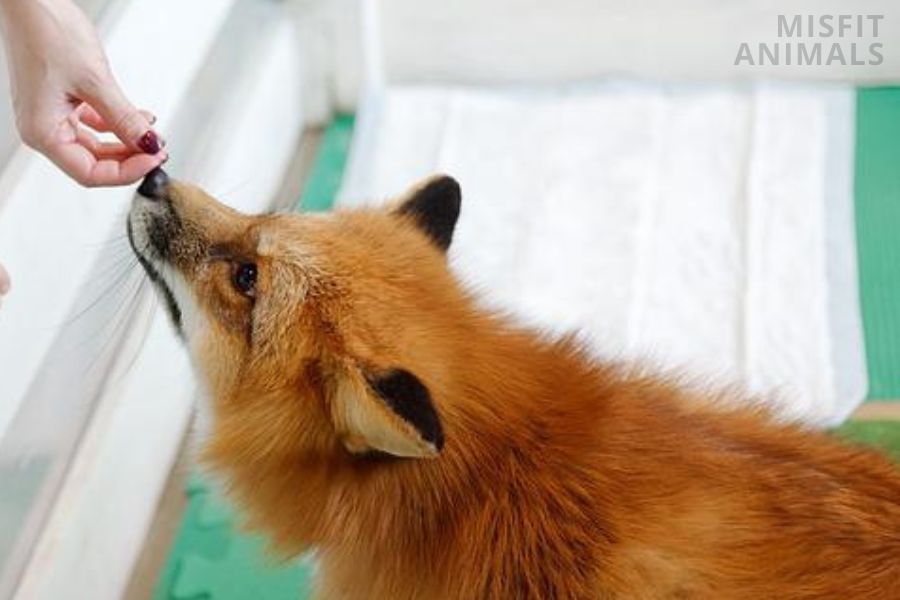 The price of a fox varies depending on the species and it starts at $400. The domestic red fox is the most expensive pet fox, costing up to $9000. Wild red fox kits and arctic foxes are the cheapest, costing around $400. The initial costs for accessories can reach $600, while the wet food per month can reach $160.

If you want a fox as a pet, find out that the price of such an exotic animal is not exactly low.

Not all fox species can be kept as pets because the vast majority are wild animals that cannot be raised and bred in captivity.

Foxes generally remained wild animals that were not domesticated like dogs or cats. The domestication of the red fox started in Russia only a few decades ago, and the price of such an exotic specimen can make you take out of your pocket even $9000.

Foxes that can be kept as pets but are not domesticated are still called wild animals. They are only tamed. The price for one of these specimens starts at $400.

In this article, you will find out how much is a pet fox, how much it costs to own a fox, and much more.

How Much Does a Fox Cost?

Not all fox species can be kept as pets. There are 23 species of foxes, of which only 12 are considered true foxes.

There are only seven species of true foxes and two false foxes that can be kept as pets.

There are three fox species that are commonly kept as pets:[1]

Other fox species that can be kept as pets, but it’s not as common:

The price of a pet fox depends on the species.

The additional costs for housing, feeding, and cleaning should also be added to the cost of your pet fox, which is initially around $600. The monthly costs are around $160 for food.

Foxes are not suitable animals to be kept indoors. They mark their territory with scent glands and they like to play in the litter box and dig everywhere.

You need to have this in mind when building your pet fox’ enclosure.

Foxes also chew and destroy things when they get bored, so you need to take this into account too.

How Much Is a Red Fox?

The price of an adult red fox starts at $200, while a kit can be $400 or more, regardless of the color. This is the cheapest fox species, tied with Arctic foxes.

Red foxes are medium-sized mammals with red-orange fur and a characteristic white pattern and a bushy tail. Red foxes can also be black, silver, brown, or white.

The price of red foxes depends on color, age, and other characteristics:

Red foxes are neither aggressive nor picky about food. They can be trained to use the litter box and can become attached to the owner.

If you intend to buy a red fox, keep in mind that all foxes are active at dawn and at night. This means that the foxes will be noisy during the hours you sleep and rest.[2]

It is recommended to purchase a fox from recognized breeders. This way, you avoid sick or problematic foxes.

How Much Is a Domesticated Red Fox?

The price of a truly domesticated red fox varies between $5000 and $9000. These foxes are so expensive because they are docile and behave a lot like dogs.[3]

The domestication of red foxes began in the 1950s at the Institute of Cytology and Genetics in Novosibirsk, Russia.

During the experiment, scientists selected only the foxes that had a high affinity for humans and those that were friendly for future matings.

How Much Is a Fennec Fox?

Fennec foxes typically cost around $2,000 but can be as expensive as $4,000. They are rarer than red foxes, which is why they cost more.

In other words, Fennec fox breeders charge more because they need to compensate for their investment.

If you plan on buying or adopting a Fennec fox, keep in mind that they get attached to the original owner. It is difficult for them to form bonds with new owners.

Because of this, grown Fennec foxes can have behavioral problems and do not always adapt well to new owners.[4]

It is recommended to adopt or buy Fennec foxes as kits and not adults.

How Much Is an Arctic Fox?

Arctic foxes are usually cheap at around $400. The price of an arctic fox can reach $5000 if you purchase it from a licensed breeder.

Arctic foxes are very similar in features to red foxes, with some exceptions:

It is difficult to take care of an arctic fox. This fox species is used to living in low temperatures, so high temperatures cause them to overheat.

Another problem with Arctic foxes is genetic disorders. Because there are only a small number of arctic fox breeders in the US, genetic problems have started to appear due to overbreeding.[5]

How Much Does It Cost to Own a Fox?

The initial cost for accessories and food can take you to $600. Foxes don’t need a lot to be happy. A place for them to sleep and dig and a quality diet will be enough to be healthy and feel comfortable in your home.

In addition to the initial purchase price of the pet fox, you need to invest in supplies such as food, accessories, and visits to the veterinarian.

Supplies are not necessarily cheap for foxes, mainly because they are exotic pets.

Here are some of the items you can purchase for your pet fox:

Depending on the species you want, you can purchase indoor ($150) or outdoor ($250) enclosures. In the case of desert foxes, it is recommended to have both to be able to bring your pet fox inside during the cold months.

Fox bedding should be soft and costs around $40.

Foxes can be fed wet dog food or you can opt for a raw diet. A fox’s food must contain a lot of animal protein and be grain-free. A fox’s diet can cost you between $40 and $160 per month.

Bowls For Water and Food

You should buy bowls made of durable and solid material, such as metal. Their price can reach $20.

Foxes love toys. You can buy balls or plushies for dogs. Their price can be $15.

If you want to take your fox for a walk, you must purchase a quality leash and harness. Their price starts from $20.

Foxes like to dig and can be taught to urinate in the litter box. Improvise a litter box in your yard or in the house to give your fox a place to dig and urinate. A bag of 20 lbs. costs around $30.

In addition to all these costs, foxes need regular visits to the veterinarian. Annual visits, treatments, and blood tests can cost you around $300.

Is It Legal to Have a Fox as a Pet?

Pet foxes are illegal in some parts of the world. In America, you are allowed to keep foxes as pets only in 16 states. In Europe, most countries allow pet foxes.

Keeping foxes as pets is not legal everywhere in the world. They are considered wild animals that can transmit diseases, especially rabies.

Not all veterinarians know how to work with foxes. Because of this, it is difficult to take care of a fox’s health and take it to regular checkups.

Here are the general rules in the US, Europe, and other countries:

How Much Is a Baby Fox?

Fox babies’ price varies depending on the species. A red fox kit is around $400, while Fennec foxes can reach $3500. Arctic foxes are not so popular, but the price for a kit is $400 or more.