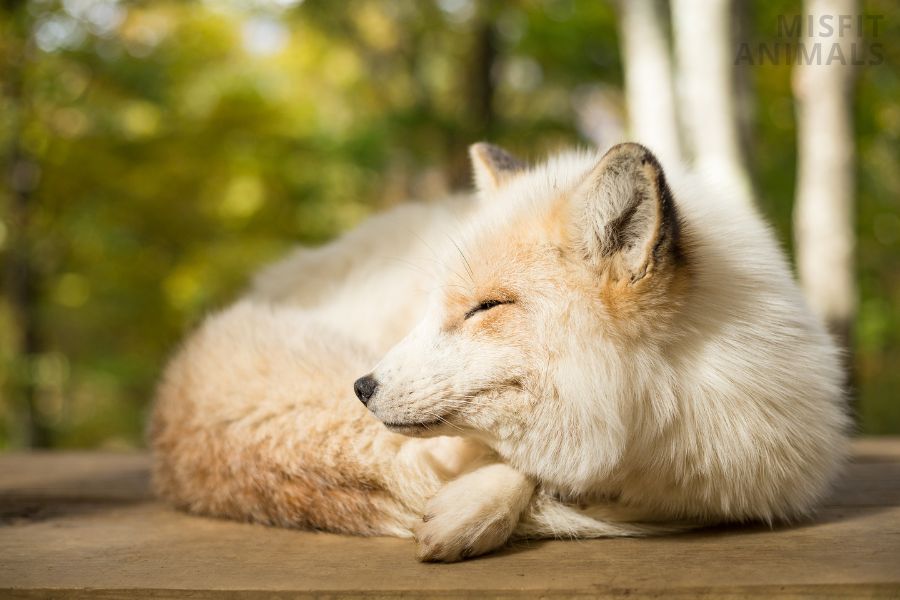 Foxes sleep out in the open near their dens or inside their den. The den is a burrow of tunnels where they sleep, store food, and nurse their cubs. Foxes sleep curled up in a ball with their noses in their fluffy tail to keep warm.

Most foxes are considered nocturnal. They hunt at night and rest during the day.

Depending on the geographical region and weather conditions, foxes sleep in their den or close to it out in the open. The dens have several exits, which allow foxes to escape from the predators that enter.

Arctic and desert foxes sleep more in their dens, while red foxes prefer to sleep near their burrows or in bushes to spot dangers in time.

How Do Foxes Sleep?

Foxes sleep curled up in a ball most of the time, but they do have other sleeping positions as well. Depending on the direction in which the fox is curled up, you can find out if it is in deep sleep or not.

Foxes usually sleep curled up in a ball, but that’s not the only position. They stick their nose in their fluffy tail to keep warm.

The positions of a sleeping fox (also called resting directions) can give you some information about how it sleeps. If it sleeps curled up on the left, it means the fox feels safe and sleeps deeply.

Males usually prefer to sleep on the left side, while females don’t have a preference.

Most foxes breathe 16-20 per minute when they sleep. The Fennec fox breathes faster because of its small body. Breathing also helps cool the body when it is hot.

Where Do Foxes Sleep?

Foxes sleep in open spaces or in burrows, also called dens. The den is a dugout tunnel that provides a cool and safe place to sleep, have kits, and store food.

Foxes’ sleeping location depends on the region and species.

Arctic and Fennec foxes are exposed if they sleep under the open sky, and therefore sleep most of their time in dens. Red foxes mostly sleep outside, as this allows them to detect threats easier.

Most foxes live in regions with plains mixed with forests, but you can also find them in the desert, high mountains, or arctic areas.

Dens are used for many purposes:

Most foxes avoid other animals, being the reason why they choose to sleep near their burrows outside. This way, the foxes can hear if a predator is approaching or if there is any danger.

Female foxes with cubs sleep with them in the den, while the male hunts for food.

They are also known for the short rest breaks they take when hunting. They rest in random dens, which are called fox rests.

Where Do Arctic Foxes Sleep?

Arctic foxes have adapted their way of living and sleeping according to the harsh weather conditions. They dig burrows deep in the snow to sleep, store food, and raise their young.

Because arctic foxes are exposed if they choose to sleep outside, they sleep mainly in their burrows. They also sleep in their dens when the weather is rough.

You can find arctic foxes throughout the arctic zone:

Arctic foxes have also been observed close to the North Pole.[1]

These species of foxes dig their burrows in areas without permafrost:[2]

Where Do Fennec Foxes Sleep?

Fennec foxes prefer to sleep in dens to avoid the heat of the day. They prefer stable sand dunes that have vegetation nearby.[3]

These foxes live in North Africa, the Sahara, the Arabian Peninsula, and northern Morocco, always far from human settlements. Because they adapted well enough to live in the desert, they are also called desert foxes.

Fennec foxes are crepuscular, meaning they are most active at dawn and dusk. They also come out from their dens at night to hunt when the temperatures are low.

Where Do Red Foxes Sleep?

Red foxes often choose to sleep out in the open, although they also have dens. They prefer to sleep outdoors under trees or bushes as it allows them to easily detect threats.

This species cannot climb trees like other species. But, if the tree has many strong branches within reach, they will also sleep there.[4]

Red foxes will only sleep in their den when:

Red foxes living in cities sleep away from loud noise and people:

Do Foxes Sleep in the Same Place Every Night?

Foxes sleep in the same place when sleeping in their den; otherwise, it is a different place every day. They always sleep near their burrow though.

Most foxes have several dens in their territory but choose only one to raise their young, the other being used for rest and food storage.

Do Foxes Sleep in Trees?

Most species of foxes do not sleep in trees, only the gray fox (tree fox or cat fox) or red fox (sometimes). Gray foxes have well-developed climbing abilities and climb trees to rest and sleep. They also climb into trees to escape from predators.

Gray foxes have sharp curved cat-like claws and rotating wrists which greatly help them climb tall trees. They can climb up to over 10 meters in trees.[5]

They stick their sharp claws into the tree bark and climb vertically until they reach the branches. They then jump from branch to branch to find a good place to sleep.

When Do Foxes Sleep?

Foxes usually sleep during the day, after sunrise. They are nocturnal, meaning they prefer to hunt at night when the nocturnal prey animals come out of hiding.

As nocturnal or crepuscular animals, foxes usually sleep in the daytime. They go to bed after sunrise and remain inactive until sunset.

They are not strictly nocturnal though and can be seen during the day. They can also change their sleeping schedule depending on where they live and food availability.

If the area where they live is safe from predators, foxes can choose to feed during the day and sleep at night.[6]

Where Do Foxes Go During the Day?

Foxes remain in their burrows or dens during the day. They don’t go anywhere. Foxes rest at this time because they hunt at night after sunset.

Most foxes sleep during the day and not at night, but they can change their sleep schedule depending on the availability of food and if the area is predator-free.

Most foxes sleep and rest during the day where you can find them near their dens:

Although foxes mostly sleep and rest during daytime, you can spot them at this time. Foxes that live in safe, predator-free areas tend to be active and forage during the day too.

How Long Do Foxes Sleep?

Wild foxes sleep around eight hours a day, while those found in urban areas sleep around 10 hours. Foxes prefer to hunt and eat at night when the animals they hunt come out of their burrows. At night the temperatures are also low.

Do Foxes Come Out in the Rain?

No, foxes don’t come out of their dens when it rains. When it rains, foxes take shelter in their burrows, make temporary dens, or use other animals’ burrows. Foxes do not like rain and humidity. But in the summer, they do cool off in puddles.

Where Do Foxes Hide in the Daytime?

Foxes do not hide during the day. They sleep during the day and choose to do this out in the open near their dens. Foxes can still be found during the day on roofs, in sunny places, in tree branches, or in gardens.

Foxes hunt and look for food at night and sleep during the day, although they are not strictly nocturnal. They look for a place to sleep after sunrise and rest until sunset when they start being active, looking for food and hunting.