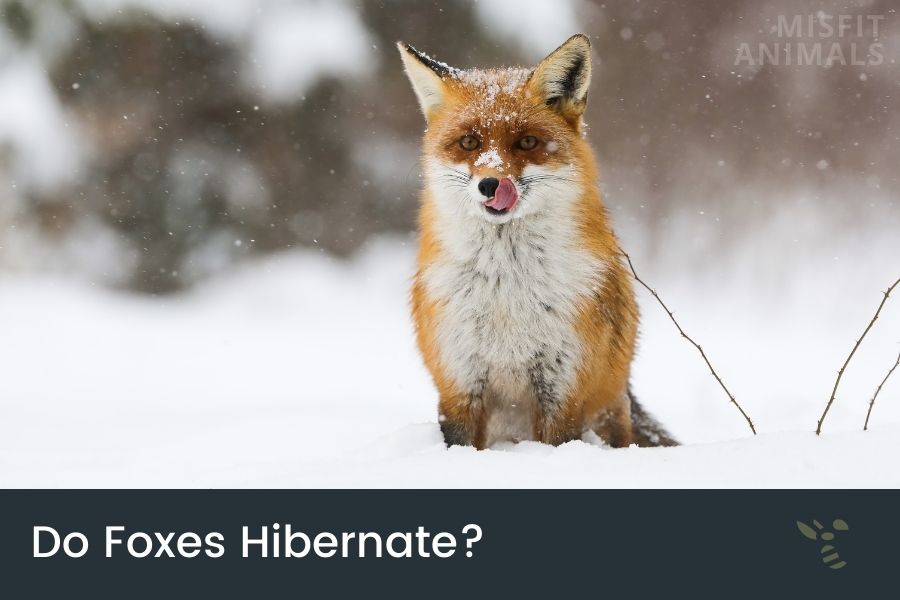 Foxes do not hibernate, but they do have certain behavioral traits to help them through the winter. Foxes are, like wolves, active throughout the entire winter.

When summer turns to winter, and the temperature drop, foxes’ bodies start changing.

Foxes can survive in very cold temperatures, especially the arctic fox, but this of course depends on the species, and their native climate.

In this article, we will talk about how foxes live in the winter months, how they hunt, and what they eat.

Foxes do not hibernate in the winter. Instead, they do a number of things to stay warm and active throughout this time. Their bodies also change, in order to keep them warm.

While many people think that foxes either tuck away for winter or that they migrate, none of these are necessarily true.

Foxes will typically not migrate in the winter unless their food does. Foxes follow the food source, meaning if no food is available, they’ll travel away from their current home to find new hunting grounds.

How Foxes Survive the Winter

Foxes do not hibernate in the winter and have evolved unique adaptations to help tide them over to spring.

They survive the winter by:

They also have a variety of tricks for traveling and hunting in the snow and on ice-covered fields where other animals would struggle.

Foxes’ paws work like snowshoes, letting them easily travel across snow. To hunt in the snow, they also jump into the air, landing face down to dig into it, catching their prey.

They Grow a Thick Winter Coat

In North America, red foxes start growing their winter coat during the fall as an adaptation to the cold. Their winter coat starts growing out during autumn. Both their outer coat grows thicker, and they grow a new underfur.

By winter, the molt is completed, providing foxes with much better insulation. This new outer coat will usually also have a different, lighter color. [1]

Use Their Tail as Insulation

The adult red foxes rarely seek shelter in dens even in adverse winter weather. They often sleep in the open, on the ground. They will curl into a tight ball and then use their tails to wrap around their belly for added insulation.

The thick fur on their tails provides the necessary barrier to prevent the heat from escaping.

Related: Why do foxes have tails?

The winter coat foxes grow does not only provide better warmth but also camouflage.

During the warmer seasons leading up to winter, they usually have a gray or brownish-colored fur that helps them camouflage in the visible landscape of the tundra.

The winter season brings with it a lot of snow which makes the landscape white. The fox will have an all-white, or mostly white, fur that covers their whole body, helping them blend in with the snow.

This helps them stay camouflaged when hunting.

This helps them survive the lean winter months when less prey is available.

Foxes’ natural behavior to build up fat, along with their winter coat, is an evolution of their behavior. They do so by instinct, as they know the winter months will pose a challenge.

Foxes are also able to thermoregulate the surface of their body. They do so with blood flow.

If the temperature of the environment is cold, the fox’s body will just increase the blood flow to the exposed areas like the nose, face, lower legs, and paws. [2]

What Do Foxes Do in the Winter?

As stated, foxes are very active during winter. They take part in hunting, foraging, scavenging, and even mating during this time of year.

Foxes are predatory hunters, meaning they prey on other animals for food. They hunt during the night, dusk, or dawn, meaning when the sun goes down when it’s setting or rising.

They feed on small rodents or mice and sometimes the occasional insects to supplement their limited food sources. If they happen to take down bigger prey, they may drag the carcass back to their den.

Some foxes get to have an easy meal if they share territory with bigger predators.

They will usually eat the leftover carrion of dead animals that these predators don’t finish. They are even keen on eating roadkill or the dead animals in traps or those that were left by hunters. [3]

Later into the winter season, you can mostly hear the foxes screaming their mating calls at night.

Once a year, from January to March, foxes will breed. They’ll then raise their kits in the spring, where they’ll be taught how to hunt and survive.

Where Do Foxes Live In the Winter?

Foxes typically have some form of the den, where they sleep and rest during the day. The activity of foxes usually is at its lowest point during the daytime, as they’re nighttime hunters.

In mating pairs, the females use the dens to hide their kits from predators. The adult male usually sleeps out in the open but close to the den.

They may retreat to the den when the weather gets too harsh.

What Do Foxes Eat In the Winter?

Foxes are not very picky when it comes to food as they are omnivorous. While they prefer meat, they may also live off of berries or fruits, if it’s the only food available.

Related: What Do Foxes Eat?

Foxes typically prey on small mammals and rodents as their primary food source. During the winter, when there’s snow, they have a special hunting technique.

You may have seen the images or videos of a fox jumping into the air and landing headfirst in the snow. It may look like the fox is playing, but it’s actually hunting. This way, they can burrow into the snow, catching their prey.

Small mammals usually burrow under the snow to keep hidden from predators like foxes. Foxes catch mice, voles, shrews, or moles this way during the winter. [4]

Some birds fall prey to the fox during the winter. Some birds migrate to warmer climates, but those that don’t usually go on torpor or prolonged inactivity during the day to conserve energy.

However, this hibernation-like state can make them easy prey for the foxes.

When food gets very scarce, foxes will become brave enough to go near human habitation for food. They will go for the easiest pickings which are to go through the trash for leftover food.

Urban foxes are very much known to rummage through the bin and this behavior picks up when winter kicks in.

Foxes remain active all year round and don’t hibernate during the winter.

They can survive the winter cold with their adaptations like growing fur that is more suited for the cold, regulating body heat, using their tail as a blanket for additional insulation, and changing their fur coloration to blend in better with the environment.

During the winter, foxes also mate. This happens between January and March.

Foxes prey on small mammals, rodents, birds, and carrion in the winter.

Arctic foxes remain active through the winter and do not hibernate. Their coat color will gradually change from their dark brown or gray summer coloring into their white winter coat, which helps camouflage them.

Red foxes do not hibernate. They are active in all seasons and have learned to adapt to living in cold, winter weather by growing longer and thicker fur as autumn starts. Red foxes will mate during the winter and their kits will emerge from the den in spring.