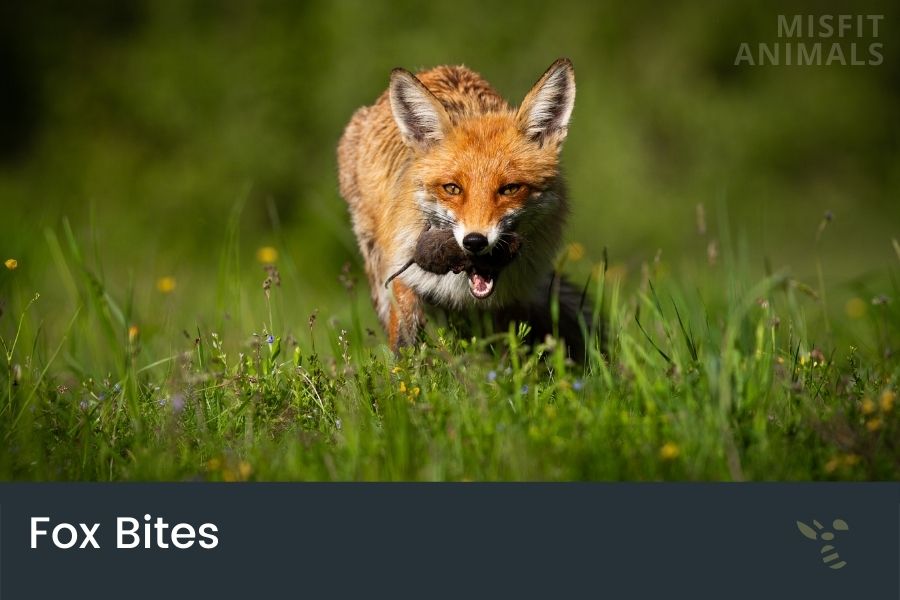 While foxes typically don’t bite humans, unless threatened, they may attack you if they’re infected with rabies or protecting their kits. Their bites hurt, and they may be carrying disease, hence it’s important to apply proper care.

Foxes are dog-like mammals in the Canidae family that inhabit every continent except Antarctica. They are known for their intelligence and their adaptability.

However, they may not be as kind and friendly as you might think.

This article will explore whether foxes bite, what their bites look like if they’re aggressive towards humans, how to prevent fox bites, and how to treat fox bites when they happen.

Yes, foxes bite and their bites can be a serious problem. Just like many wild animals that have sharp teeth, they will use their teeth for their protection from perceived threats.

Foxes typically won’t bite unless they are cornered, threatened, or otherwise under stress.

This means that they will try to avoid human contact as much as possible and won’t bite you if you leave them alone.

Fox bites can be painful and can cause a lot of damage to your skin. Foxes have a bite force around 92-100 PSI, similar to that of a dog or coyote. [1]

Foxes do typically not attack humans. They naturally shy away from human contact and will avoid crossing paths with us most of the time. They will only attack if they feel threatened or are cornered.

Foxes might nip at you if they get startled.

It’s important to note, that this isn’t always the case. Rabid foxes, foxes that have been infected with rabies, will attack unprompted.

Rabies is a serious health threat to humans. If you come across a fox that’s showing strange behavior, you should keep away.

When humans feed the foxes that pass by their property, these foxes become comfortable with human presence and may not see you as a threat anymore. Hence, it’s possible to form a bond with foxes.

Fox attacks on humans are rare, but fox attacks on pets such as dogs and cats happen much more often. If you have pets, especially small pets like rabbits or guinea pigs, you should keep them away from foxes.

Can Foxes Be Aggressive?

Foxes aren’t aggressive in general, but rather on the nervous and cautious side of the spectrum when it comes to human interaction.

They prioritize safety, and they see humans as a natural threat. Hence, they’ll most often venture out when no humans are around.

Some foxes become tolerant of humans. If humans tolerate the presence of foxes, as well as avoid showing aggression or do any sudden movements or making loud sounds.

They may start feeling confident in approaching humans or playing in the presence of humans if they are left alone.

If you offer fox food, there is a chance you can form a bond with it. But beware, foxes aren’t meant to be kept as pets. They’re wild animals.

Rabid foxes are aggressive. This is a natural side effect of the disease. Rabies will cause foxes to show unnatural behavior. This includes not running away from loud noises, or not shying away from humans.

A fox bites are shaped much like an, where the ends have deep puncture holes from their sharp teeth. Fox bites will cause damage to your flesh, as their teeth sink in. They may also cause further lacerations.

The best way to treat a fox bite is to prevent it from ever happening.

The best way for you to prevent fox bites is to discourage foxes from passing by your property or make your property less desirable to them.

Keep Foxes Away From Your Home

The first step to preventing being bitten by a fox is to keep it away from your home.

As foxes mainly roam around to look for food, you need to make sure that you don’t have food scraps laying around. You should also have a latched cover over your garbage bins to stop them from foraging through your trash.

Another way to keep foxes from your home is to set up deterrents that use bright, flashy lights and ultrasonic sounds. You can also use repellents that make use of smells that foxes hate or try to avoid.

Sound- and light-based repellents startle the foxes and make them feel unsafe so they would avoid passing by your property.

Foxes also frequently venture out to find shelter. Fill up any holes, or clear out any brush underneath trees, that could serve this purpose.

Fox bites are generally not fatal or life-threatening, but you should get medical help if your fox wound is deep or gaping.

Your utmost concern is to make sure it stops bleeding and prevents any kind of infection.

If you’re helping someone else, who has been bitten by a fox, make sure to wash your hands first to avoid infection.

1. Wash With Soap and Water

You should wash the affected area with soap and running water.

There might be bleeding depending on where the fox bit you. Make sure to apply pressure on the wound with a gauze or cloth to stop the bleeding.

2. Clean the Bite and Apply Bandage

After washing and drying the wound area, make sure that the area is clean of any other debris. Apply antibiotic ointment to reduce the likelihood of infections.

You should finally cover the bite wound with a sterile bandage.

Medical professionals at bite clinics and hospitals are adept at further treating the bite wounds to prevent diseases and can prescribe any necessary medication.

Foxes can spread diseases to humans and domestic animals through direct as well as indirect means.

While they may carry various parasites and diseases that affect their own health, these aren’t the main concern for humans and communities. [3]

The main diseases spread by foxes are Rabies, Salmonella, and Leptospira (Weil’s disease).

Foxes can be carriers of rabies. Rabies is a serious threat to humans and should be treated immediately. If clinical symptoms appear, rabies is 100% fatal. [4]

They can also carry bacteria like Salmonella and Leptospira that cause infections and deadly diseases.

As they live out in the open, foxes will also have ticks and diseases that can be passed on to pets.

Fox fecal matter can be a source of tapeworm, roundworm, or lungworm species that can infect your dogs or cats. Foxes can also pass on mange and other skin diseases to your pets.

Foxes don’t bite humans unless they’re threatened or otherwise prompted to. If they’re infected with rabies, they will attack without being threatened, hence it’s best to keep your distance.

In general, foxes aren’t dangerous to humans. They keep their distance from humans, as they see us as threats. They’re only dangerous if they’re infected with diseases, which can spread to humans via their bite.

Foxes are, however, dangerous to small pets. They’re predators, meaning they hunt other animals for food. If you have small pets at home, such as rabbits, foxes may kill them and bring them back to their den.