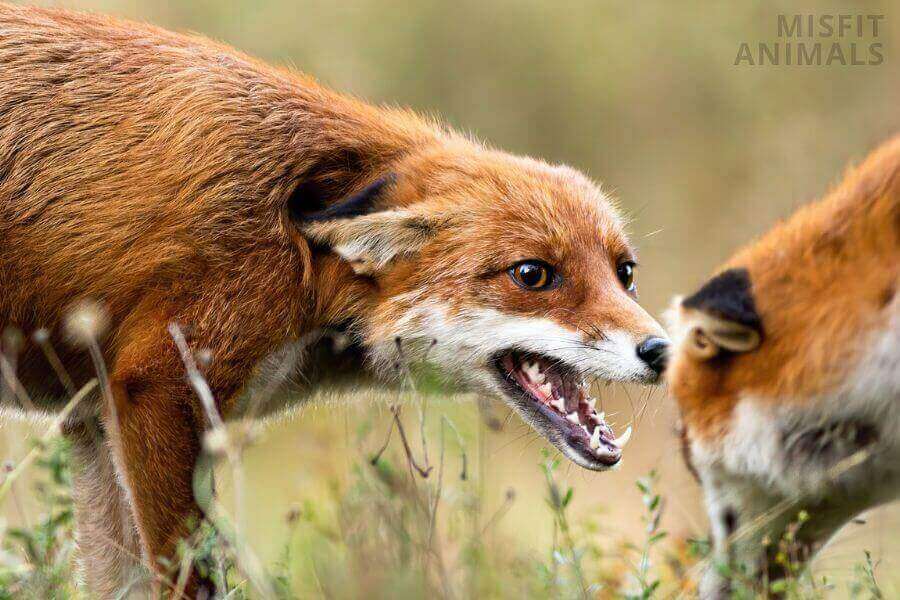 Foxes attack dogs on extremely rare occasions, as they generally keep their distance. Foxes prefer to run away rather than engage in a fight, but they will defend themselves against a dog if threatened. A fox with cubs can also attack a dog.

Foxes are quite common animals. They populate almost all regions, including cities as they are full of food.

But this urbanization of foxes has introduced a new issue: a new threat to pets.

Although they are predators, foxes prefer to run away rather than fight an enemy. Nevertheless, when they feel threatened, they can attack both people and pets. Especially if they are protecting their young.

In this article, you will learn whether foxes attack dogs, if they eat them, and much more.

Foxes can attack dogs, but only do so on extremely rare occasions when they feel threatened. Most fox attacks on dogs happen when females feel that their cubs are threatened. Otherwise, foxes typically run away rather than fight.

Foxes are generally shy animals. They keep away from other animals, including pets. But there are some situations where they attack:

Foxes are one of the animals that are most affected by rabies, a disease that attacks the nervous system of mammals and causes death.

Rabies is a contagious disease, transmitted through the saliva of the infected animal. It can be transmitted to humans and other animals, including dogs.

Rabid foxes are aggressive. They attack and bite out of the blue, no matter who they’re facing.

Vaccination is the best way to prevent rabies in dogs.

Compared to foxes, some dogs can reach 200 pounds. In other words, foxes are not a threat to most dogs. Besides, foxes are afraid of big dogs because some people use them to hunt foxes. As a result, foxes avoid dogs in most cases.

Regarding small dogs (smaller than foxes), they can be targeted by a hungry fox or one defending its cubs, but this happens in extremely rare cases.

Foxes are not conflictual animals. They prefer to run away and only enter into a conflict only if absolutely necessary. They are also afraid of people. If you are walking your dog and you meet a fox, it will most likely run away.

Regardless of what breed your dog is, you have to keep it on a leash when you go into an area where there are foxes. Even if they will not attack it, foxes can be dangerous for dogs because they can transmit numerous diseases.

Yes, foxes can attack small dogs. Although it’s rare, attacks are not unheard of. Small dogs are easier targets for foxes, even if they prefer to run away instead of engaging in fights.

Even if foxes do not see small dogs as a threat or food, attacks are avoidable.[2]

Foxes generally attack defenseless animals. This includes small dogs that stand no chance against a fox, puppies, or sick dogs.

They especially attack when they feel that their nest or burrow is threatened.[3]

It is unlikely a fox will eat a small dog. Dogs are not part of a fox’s regular diet. They usually feed on rodents, vegetables, fruits, insects, or snails. Not even a small dog would interest a fox.

It’s unlikely a fox will eat a dog, but that doesn’t mean it’s impossible.

Foxes are unpredictable and opportunistic animals. They eat what they can find. If there’s nothing else but small dogs around, it’s possible they become a target.

Dogs are exposed to attacks if they wander near a fox’s den. This is where foxes take care of their cubs. Getting too close triggers a threat response in the fox.

There’s also a higher risk of getting attacked by starving foxes.

When foxes run out of prey, they start eating things they normally wouldn’t, such as dogs.

Related: What Do Foxes Eat?

Do Foxes Eat All Dogs?

Foxes do not attack and eat all dogs. They usually target small dogs, puppies, or sick dogs.[4] These dogs are an easy target for starving foxes because they are defenseless.

It is unlikely a fox will attack and eat a medium or large breed.

If a fox makes a den in your garden, your dog might be in danger. Foxes become extremely aggressive when they are around their den with their cubs.

If they feel threatened, they can even kill your dog.

The following steps are recommended if a fox settles down in your garden:

Are Foxes Dangerous to Dogs?

Dogs can get sick if they eat fox feces or are bitten by them.

Here are the most common diseases transmitted from foxes to dogs: [5]

Related: What to Do if a Fox Approaches You

Are Foxes Afraid of Dogs?

Yes, foxes are usually afraid of dogs, especially of those that are from large and gigantic breeds. Humans also use some dog breeds to hunt foxes.

Will a Fox Go After a Dog?

Foxes will not attack dogs unless they threaten their cubs. Foxes are not conflictual animals and don’t prey on dogs. They prefer to run away over engaging in fights. If they feel in danger or if their young are in danger, then they will become aggressive and attack.

Do Dogs and Foxes Get Along?

Wild foxes do not get along well with dogs, but foxes kept as pets do. Pet foxes usually get along well with the dogs they were raised with when they were young. However, foxes are unpredictable animals, even if they are tamed, and can be dangerous for dogs. Foxes can be trained to walk on a leash and use the litter box.