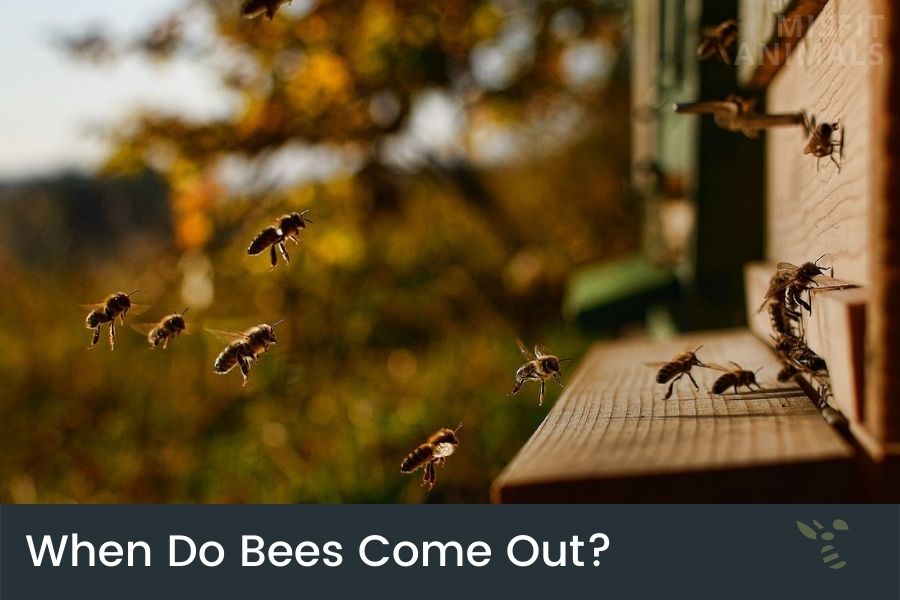 One of the most frequently asked questions about bees is “when do bees come out?”.

Well, the answer is more complicated than you might think!

Bees are affected by seasonality, their daily activity pattern, species, and a lot of other factors.

This post will cover seasonality and time of day for honey bee activity.

When is bee season?

Bee season starts when flowers are blooming, usually between April-September. Bees will be very active during late spring and summer while continuing a little activity in the fall.

Swarming will take place in the late spring or early summer (May-July), with a few late swarms in August.

When is bee season over?

Bee season varies with the kind of bee and location. If you’re in, say, California, then it’s usually around November or December. According to some beekeepers in North Carolina, their bee season is over by early September.

Where do bees go during winter?

Bees, like most insects, go into a low-activity mode during the winter. They will stay in their hive, grouping up to conserve heat. While they don’t hibernate, you wouldn’t be able to tell the difference, as they’re staying very still.

If it’s exceptionally cold, they may start to shiver to generate heat, while grouping around the queen.

Bumblebees only live during the summer. The queen will retreat over the winter, going into hibernation.

The honeybees’ activity levels slow down in the fall when they stop collecting nectar and pollen from nature’s bounties. They will have stored nectar up during the summer, to make sure they have enough food to eat over the winter.

Related: Where do bees go in the winter?

No, most bees don’t hibernate. They simply go dormant, slowing down activity to almost a full stop.

Honeybees have a few different ways to keep from freezing in the winter. They avoid freezing by vibrating their muscles at a high rate, which generates heat. They also form a tight cluster to trap warm air in between each bee and regulate their body temperature.

Bumblebee queens are an exception – these will find shelter, where they’ll hibernate through the winter. In spring, they’ll come out to lay eggs.

The Daily Cycle of Bees

Bees are creatures of habit, meaning, they do much of the same things every day.

The daily cycle of a honeybee worker may look something like this:

This of course depends on what type of bee it is, what time of year it is, as well as whether it’s a house bee or forager bee.

What time of day do bees come out?

Bees come out in the morning. Depending on where you live, as well as what time of year it is, this may be between 6 a.m. to 9 a.m.

They won’t be active, or even visible, during the night, as bees like to keep themselves hidden while sleeping.

When are bees most active?

Bees are most active during the day, specifically around morning until early afternoon. This rhythm is important, as bees need to forage when nectar is available. Otherwise, they’ll be wasting their energy.

A study has also found that bees are better at learning in the morning. [1]

Bees are most active in the morning because there’s less risk of predators like birds and lizards catching them when they’re tired.

When it comes to seasonality, bees are most active during late spring and early summer, when nectar availability is peaking.

Related: When are bees most active?

When are bees least active?

Bees are least active during the winter when temperatures drop and conditions are harsh. Bees can’t fly if it’s too cold, as they’ll lose heat. They’ll stay inside their nest to keep warm, grouping together and vibrating their muscles.

As spring progresses, their appetite for pollen and nectar increases as the weather warms up.

Bees are generally also inactive during the night. Most bees are diurnal, meaning they sleep at night.

Related: When are bees least active?

Do bees come out at night?

Most bees come out in the day to forage nectar and pollen from flowers. However, some bees show the reversed pattern, coming out at nighttime to do their main activities.

These are nocturnal bees.

These bees will have better night vision, with bigger ocelli, to help them navigate better during these dark hours of the day.

They are not as efficient foragers at night because there is less pollen available, or it has already been taken by other pollinators.

As mentioned, most bees are diurnal, while a few bees show nocturnal behaviors.

But what’s the difference between these two? Why are different species active at different times?

Diurnal bees are bees that are active during the day. Their main activities will take place during daylight hours, where they will forage, expand their hive, as well as other common bee activities.

There are certain benefits to being a diurnal bee. Diurnal bees have more time during the day to gather nectar and pollen for their hive.

Diurnal bees can be found around the world, as the vast majority of bees show this behavior, such as most honeybees and bumblebees.

There are certain bee species, called “solitary” bees, that live alone and do not live in hives or colonies. Solitary bees have a different life cycle than social bees.

Nocturnal bees are bees that forage for pollen and nectar at night. Since their activity is limited to the hours of darkness, they must be able to see in low light conditions.

Most plants start producing nectar in the morning, meaning, nocturnal bees typically feed on the leftovers from diurnal bees. [2]

Nocturnal bees are often found in warmer climates, as temperatures will be too high during the day.

Weather conditions affect all kinds of things and organisms on a global scale, including honeybees and their colonies.

When bees are collecting nectar and pollen, weather conditions can make it harder for them to do their job.

If the wind is too strong, honeybees may have difficulty flying. Bees are very light and small. Sometimes the wind will blow them away. Extreme wind can cause bees to stay inside their hive all day.

Too much wind can also blow off pollen that’s on the bees’ legs or flowers. This again makes it harder for them to bring nectar, honey, or pollen back to their hive.

Temperature is an essential factor for bees. If it’s too cold outside, they won’t go out. They also won’t go out if it’s too hot.

If the temperature of the air is colder, it’s harder for the bees to fly; if it’s hotter, there is more danger of overheating.

This is also why bees are very inactive during the winter. The bees can’t work with the low temperatures.

Wind and rain are two very significant factors when it comes to bee activity. If any of these are present, bees may stay inside their nest.

Generally, 20 mph wind (9 m/s) will keep bees in their hive. If it’s any windier than that, the bees will waste too much energy trying to stay upright.

The same goes for rain. Too much rain will cause the bees to lose the ability to fly. If bees’ wings get wet, they can’t use them. Light rain won’t hurt, but heavy rain will be fatal.

When do bees sting the most?

Bees sting when they are agitated or feel threatened. While a person can get stung at any time, there are certain times of the year when bees sting more frequently.

A study showed that honeybees will only sting and attack to defend their nest, or if they’re disturbed. Leave the bees alone, and you won’t be stung. [3]

In spring, the weather warms up, and flowers begin to bloom. It creates an increased food supply for pollinating insects such as honeybees that feed on pollen and nectar.

It means bees are more active and busier than usual as they try to collect as much food as possible before the flowers die out in the fall.

During this busy time, it is common for bees to become stressed and agitated.

You may also like: Do Bees Attack & Sting at Night?

People often unknowingly agitate or threaten bees by accidentally disturbing their hive or swarm, or by wearing solid fragrances such as lotions and perfumes.

Bees can also be easily agitated if there’s bad weather. Beekeepers know to only work with their bees on days where the weather is good. If it’s too cold, warm, rainy, or windy, leave bees alone.

In spring, bee sting activity is at its highest because this is a time of increased food supply. In warm climates such as those found in southern states, this occurs during March, April, and May.

What time of day are bees most aggressive?

While the aggression of bees is mostly due to the behavior of specific species (the western honeybee is much less aggressive than the African variation), bees can be more aggressive at different times of the day. [4]

Scientists from the University of Illinois looked into this question and published their results in a February 2016 issue of Behavioral Ecology.

In laboratory conditions, bees were most aggressive when they had been woken up early. Bees who had less energy showed higher levels of aggression. [5]

Its generally believed that bees are most aggressive in the afternoon. At this point, the workers will have foraged and worked all day, and they’ll be depleted of energy. This can trigger aggression faster.

An interesting study also showed, that bees have group genomics, meaning, bees can be aggressive as a group, while not necessarily having individual aggressive genes. [6]

Yes! Bees, like all living things, need rest. Most bees are diurnal, meaning they work at day and sleep at night, though some have taken on the opposite pattern (nocturnal behavior).

Bees will sleep 5-8 hours every day.

Bees season takes place from April to early September but can be longer depending on location. Bees are active all day, collecting nectar and pollen, while the queen lays eggs.

The activity levels of bees are highly affected by the weather. Heavy rain or cold temperatures will stop bees from coming out.

What time of day are bees most active?

Most bee activity occurs in the morning when bees are leaving their nests to find food. This is generally around 6 am to 9 am but varies depending on weather and temperatures.

What time of day do bees go away?

Bees often go away at the end of the day. There can be some exceptions to this rule. Some bees are nocturnal, meaning they come out when the sun goes down.

What season do bees come out?

In spring, when temperatures are rising, and flowers bloom, bee season starts. This is when bees will increase activity levels, as they can finally collect nectar again.