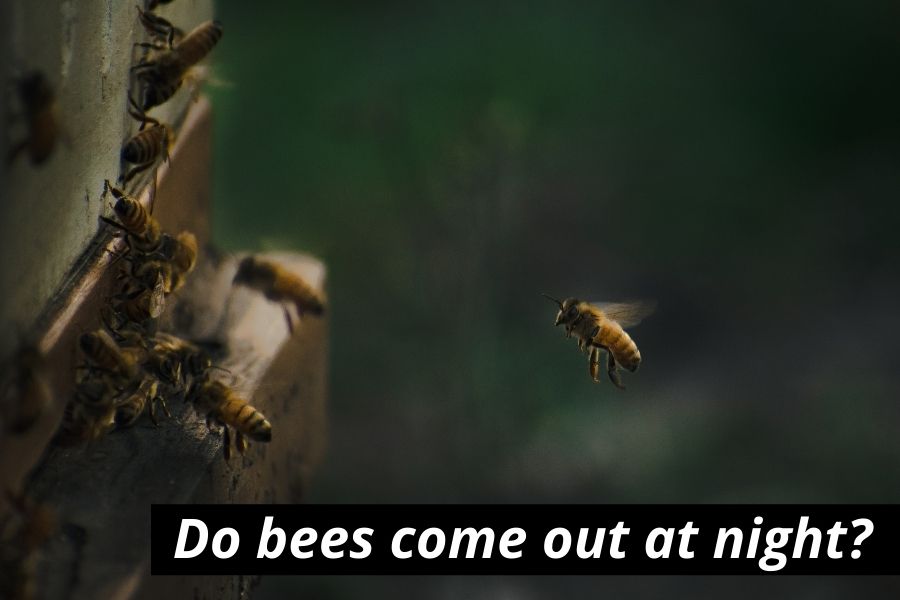 Most bees are diurnal by nature, meaning they don’t come out at night, but that’s not true for all bees. Some bees are nocturnal, coming out at night to forage.

While nocturnal behavior is natural to some bees, others come out due to a parasite that has infected them.

The truth is – bees are fascinating little creatures who have plenty of exciting behaviors, day or night.

In this article, we’ll talk more about what bees do at night, what species are nocturnal, and why that is.

Do Bees Come Out at Night?

Yes, some bees come out at night – nocturnal bees do exist. These bees have developed the ability to see and fly in the dark. The level of darkness they can tolerate varies depending on the species.

All sorts of bee species are out and about at nighttime, even if they’re not busy gathering pollen or defending their hives. These types of nocturnal plants thrive thanks to this time-sensitive pollination system!

What Do Bees Do at Night?

Do bees do anything at night? Some of them do.

Nocturnal bees will mostly do the same things as bees that are active during the day: collect pollen and nectar (from flowers that are open at night), keep the nest clean, and do other bee activities.

One particular species does something very unique after dark: it builds honeycombs. The Western honey bee will build its hive without sunlight, relying mostly on moonlight.

Most bee species are sound asleep at night though.

Do Bees Fly at Night?

Bees do fly at night, but not all species do so. There are a few specific species that stay active after the sun goes down.

Particular bee species do take to the air once the sun goes down. And although these nocturnal bees might be a little more vulnerable than those who stay in their nests during the night, they do have one significant advantage.

Nectar is the primary food source for bees, and these tiny insects collect it in massive amounts daily. The nectar that bee species gather in their daytime activities is often so plentiful that they don’t need to go out hunting for food at night.

Can Bees See at Night?

There are a few bee species that have developed the ability to see at night [1]. These nocturnal bees fly during nighttime, but instead of relying on sunlight, they use the moonlight to see.

Due to their evolved night vision, this is enough for them to navigate.

Also read: Can bees see in the dark?

Do Bees Sting at Night?

One misconception that most beekeepers often hear about bees is whether or not they sting at night.

It may seem unlikely that these creatures would still be active when the sun goes down, and the world turns dark,  but to many people’s surprise, some bees can fly just as well during nighttime hours as they do during the daytime.

So, no matter what time of the day it is, bees will undoubtedly sting for protection.

Read more on the subject: Do bees sting at night?

Do Bees Attack at Night?

Yes and no. Bees only attack in response to a threat and will most likely retreat once the danger has passed, or they’ll die trying. This applies whether it’s daytime or nighttime.

Bees are typically active during the morning between 6 am, and 9 am. It has often led people to believe that all bees are diurnal (busy during the day).

However, a few bee species show nocturnal tendencies, which means these particular bees sleep during the day instead of at night.

Three types of nocturnal bees include:

Miner bees are also known as chimney bees [2]. They look much like a smaller bumblebee with their black and yellow color.

These bees are friendly and won’t sting or bite unless attacked.

These bees got their name from the nesting behavior. Nesting underground, they burrow down to lay their eggs in well-drained soil in hills, banks, or other similar places.

The Indian carpenter bee is remarkably good at navigating in the dark. They can fly out and find their way in the darkest of nights. They don’t even need moonlight.

Digger bees are solitary bees that nest underground – hence the name. These bees are bigger than honey bees but smaller than bumblebees.

You’ll spot these bees in Arizona, their native homeland.

Many different bee species fit the crepuscular description. Crepuscular means “active mainly at dawn and dusk” or “appearing or active in twilight”.

In other words, these kinds of bees fly out when the sun rises and when it sets.

Bees with this behavior can be found all over the world.

Two species with crepuscular behavior are:

The African honey bee (or the Africanized honey bee) is also known as the “killer bee”. This is a hybrid breed between the western honey bee and the East African lowland honey bee.

These bees will respond faster to threats, attacking more often when disturbed. They’ve even killed more than 1.000 people in total.

They will defend their hive no matter the cost.

The Giant Asian honey bee can be found in South and Southeast Asia in forested areas.

A specific character trait is their nest building. They will usually build their nest high off the ground, such as in tall trees or under cliffs.

These, like the African honey bee, can appear very aggressive, due to their defensiveness. They will attack quickly when disturbed.

Why Are Some Bees Active at Night?

There are many reasons why some bees are active at night. The main reason is for food purposes. These bees have evolved over many years, as they have probably had an easier time collecting food and surviving by changing their sleep schedule.

Another reason some bees are active at night is because of the climate.

Bees that live in more tropical climates tend to be more active at night than those who live in colder climates.

If it’s too hot outside during the day, the bees will be at risk of overheating. Hence, they might fly out at night instead, where the temperatures drop to a tolerable level.

Do Honey Bees Fly at Night?

Yes, and no. Honey bees are among the many species of animals on this planet that prefer to work (and play) during the day, but there are species of honey ants that have developed a nocturnal behavior.

Most honey bees prefer to work during the day, but some (like the African honey bee), will work at night or dusk.

Spending their days sleeping in hives, they go out to collect pollen and nectar during the night.

Their preference to fly at night is for various reasons, one being their acute sense of orientation to light.

A reason why nighttime is their preferred time for flying is that it might be easier to collect food at night. Some flowers are open at night, which makes collecting nectar and pollen possible.

To summarize, some bees do come out at night. There are a variety of bees that are nocturnal, meaning they sleep during the day and work during the night. They will collect nectar, pollinate, build their nest, and do other bee activities, just like bees do during the day.

Some species of bees are most active during dusk at dawn. These are called crepuscular bees.

Bees are usually active during the day, but there are nocturnal bee species. That is because they have to avoid predators or collect nectar from flowers that open at night.

Nocturnal bees also emerge at dusk so that they can beat the heat of the sun and feed on flowers before it gets dark out.

Do Bees Sleep at Night?

Most bees sleet at night. They will work all day, usually from the sun rises till it sets, where they will then go to sleep. Many bees sleep near the entrance to the nest, to make sure they can act quickly if something threatens the hive.

Nocturnal bees have turned this pattern upside-down. They will work at night and sleep during the day.

Where Do Bees Go at Night?

Nocturnal bees forage for food at night. They’ve learned to see and fly in the dark. They will, like bees during the day, fly from flower to flower while collecting nectar and helping out with pollination.

Do Bees Buzz at Night?

Yes, bees also buzz at night. The buzzing comes from their wings. Since nocturnal bees fly at night, they will also buzz.