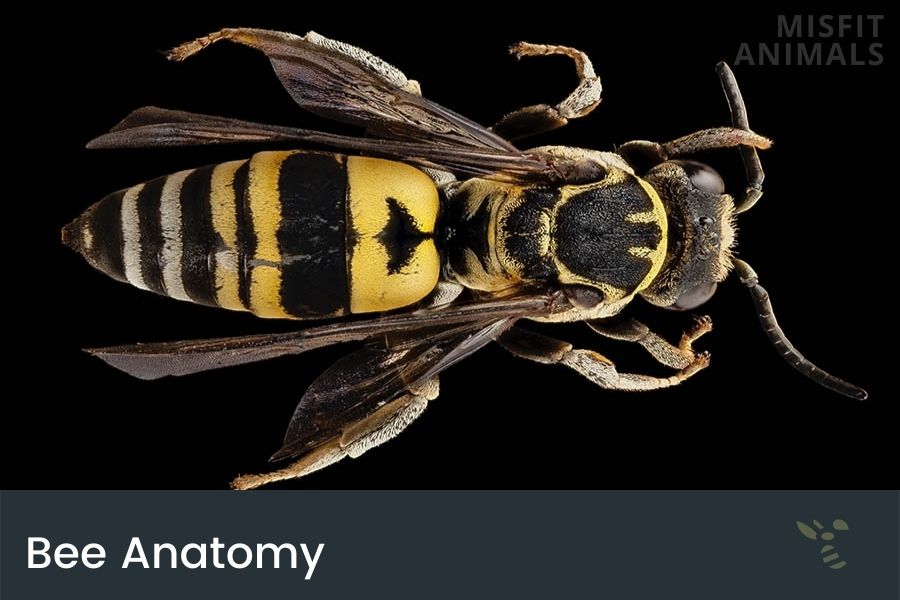 Everyone knows that bees are tiny insects with a lot of power. They can fly around, sting humans, and even make honey! But have you ever wondered what makes up the bee? Bees are undoubtedly exciting creatures to look at.

With so many parts, it’s essential to understand how they work to maintain their health. Let’s take a closer look at the anatomy of these fascinating insects!

Parts of a Bee

Bees have a distinct appearance and body structure. Most people will recognize a bee when it flies past them.

This body structure helps with flight, feeding, mating, and other bee behaviors.

Bees have a complex head which is considered their most important part.

The outer structure of the bee’s head is composed of three main sections; the clypeus, frons (front), and vertex (top).

On the outside of bees’ heads, we’ll find:

Bees also have other mouthparts for feeding on nectar and pollen, as well as a tongue-like structure called a proboscis that it uses for drinking liquids.

The compound eyes are used for regular seeing, and the ocelli are used to detect light.

The eyes of a bee are more complex than the eyes of many other insects. For instance, they have facets of small lenses arranged in a single ommatidium, and they have thousands of ommatidia.

Bees can also see color, but not the same as humans. Bees can’t see red, but can instead process ultraviolet light.

Related: How many eyes do bees have?

Mandibles are the two jaws of insects. They are present in all insects except for adult male dragonflies (which have a modified lower lip). The mandibles also have a jagged look, because bees have teeth on their mandibles.

Bees use their mandibles for almost anything: biting, holding down prey, cutting, building, carrying, and so on.

Antennae are used for the sensory input of many different insects, including ants, bees, and other types of flies. Insects detect touch (including vibration), smell, heat, and taste with their antennae.

Antennae are jointed appendages on the insect head that most people know as “feelers,” although the correct term is the antennal flagellum.

Antennae are insects’ most important sense organs, used to detect scents, tastes, sounds, and sometimes even light. They are located on the head of an insect just behind the eyes.

The antennae also contain “Johnson’s Organ”, which they use to hear, even though they don’t have ears.

The thorax is the middle section of a bee. It is segmented into three parts: the prothorax, mesothorax, and metathorax:

Bees have four wings, two large hindwings, and two smaller forewings attached to the second pair of legs. The wings are hooked together in flight.

Bee flight is different from most flying animals, and this comes down to how their wings work. When they beat their wings, they don’t just do so up and down, but also back and forth.

They use their wings in a 90-degree pattern, to create more lift.

Bees have six legs, all six legs are covered with fine hairs. Bees’ legs are split as so:

They use their forelegs for grabbing and grooming, while they store pollen on their hind legs, where it’s out of the way.

The legs are split into 6 segments:

On the Tarsus, you’ll also be able to locate the Tarsus Claw.

Related: How many legs do bees have?

The pollen basket is located on the outer side of a bee’s hind legs. They contain pollen and are designed to keep the pollen from spilling.

The abdomen is part of an insect’s body, which contains various organs and structures. It is also called the posterior region of the body, or opisthosoma in insects with an open circulatory system like most arthropods.

The structure houses essential internal organs such as the gut, reproductive organs, and glands but does not enclose any vital structures such as the heart or brain.

In queens, the abdomen houses the spermatheca, the female reproductive organ of bees. This is used to store sperm collected from her mating flight. The ovaries of queen bees begin to work 1-2 weeks after being born. [1]

Males are equipped with degenerated testicles, each with four follicles. [2]

Wax is secreted by two pairs of glands on the ventral surface of the worker bee’s abdominal segments. These glands are surrounded by numerous long, thin cuticular tubes through which melted wax flows out.

It is essential to have at least a general understanding of the internal anatomy of bees to understand bee biology.

The heart-like structure in bees often called the dorsal vessel or simply the heart, is an open circulatory system, meaning, the heart runs through the entire body.

The dorsal vessel, which is a long tube of muscle, runs from the head to the abdomen, pulsating to create a circulation of hemolymph inside the bee’s body.

Hemolymph is the equivalent of bee blood.

The hemolymph flows freely inside their bodies.

Related: Do Bees Have Hearts?

Bees don’t have lungs as humans do. Instead, they have spiracles, which are little holes in their bodies that take in air.

These holes then connect to the tracheal system, a system made up of tubes and air sacs.

The tubes will transport oxygen to the muscles, as well as carbon dioxide away from them. The air sacs are located along the way and are there to improve the flow of gasses.

Related: Do Bees Have Lungs?

The brain of the bee is located in its head. The brain has three parts that are highly developed [3]. These are:

The stinger is used for attacking and defending against threats [4]. Worker bees have a barbed end on their stinger. The stinger is made up off:

The stinger is located at the end of the abdomen. Drones do not have stingers.

A venom sac is a gland found in insects to inject venom into their prey or aggressor. The bee’s venom sac is located in the abdomen.

Honey bees, like all insects, have a hard exoskeleton made up of three pieces: the head, thorax, and abdomen. They also have six legs, two antennae (feelers) that are used to smell (olfactory sense), taste (gustatory sense), touch (tactile feel), and communicate with other bees.

Like any other bees, they also have two compound eyes that allow them to see in high resolution (which is why they can see you coming) and three simple eyes on the top of the head called ocelli.

Bumblebees have fuzzy hairs all over their bodies except on their transparent wings. These hairs can help collect pollen from flowers when they land on them to get food.

Bumblebees have an antenna, a mouth part known as a proboscis, and big eyes. The antennae are attached to the head and used to sense the environment around them.

Their mouthparts are part of their body called a proboscis that is long and tube-shaped. They use it to suck up nectar from flowers as food.

Queen bees are the mothers of all bees in a hive. They stay inside the hive and rely on the worker bees to bring them nectar, pollen, and water throughout their lifetime.

The queen bee’s job is to lay eggs for new generations of worker bees and drones (male honeybees). The queen will lay up to 3,000 eggs per day.

Like a worker bee, she has small eyes, wax-producing glands on her body for building comb cells, a stinger for protection, and a digestive system that processes pollen into bee bread.

However, the queen has several physical characteristics that make her stand out from other bees in the hive. She is much larger than a worker bee – about twice as long – and has a longer stinger.

The queen bee has a larger, rounder thorax than the worker bees. This is where her wings and flight muscles are attached. She has a smaller head than the other bees.

The abdomen of the queen bee protrudes past her wings and has an ovipositor at the tip, which she uses to lay eggs.

Bees’ bodies are split into three sections: head, thorax, and abdomen. Queens and workers have all of the same parts, except for the reproductive organs. Bees have five eyes, a set of mandibles, two antennae, six legs, two wings, and a single stinger.