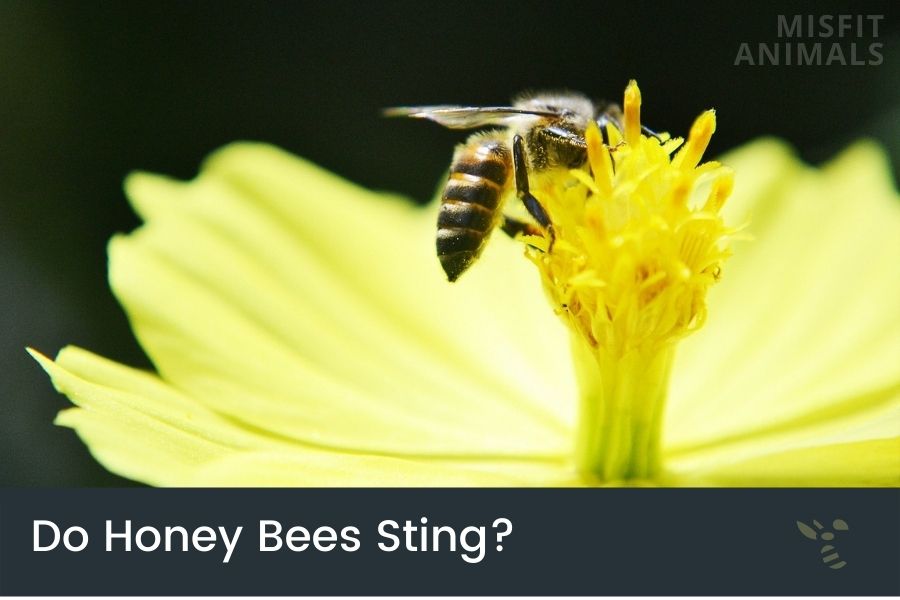 Honey bees sting, occasionally. They typically only sting if they feel threatened, or otherwise disturbed. Staying calm, avoiding sudden movements, and staying silent are great ways to avoid being stung by a honey bee.

Do honey bees sting? Do they die after stinging people?

These are common questions about honey bees. The answer is, it depends.

In this article, we’ll explore the behavior of honey bees and find out what happens when they sting.

Honey bees do sting sometimes, but this usually only happens if they’re threatened. If you leave them alone or don’t harass them, they most often won’t sting.

Honey bees aren’t aggressive by nature. They use their stinger as a defense mechanism.

The workers of the honey bee species have barbed stingers, meaning they’ll be stuck in your skin if they sting you. If stung by a honey bee, you should remove the stinger as soon as possible.

A honey bee sting can be very painful and can cause swelling and redness. The honey bee’s venom can also cause an allergic reaction in some people. On rare occasions, honey bee stings have been fatal to people.

Besides stinging, honey bees can also bite [3]. If honeybees feel threatened, they will sting and bite to defend themselves.

While their bite usually isn’t as painful as a sting, it still hurts. A little-known fact about bees is, that they also infect biting wounds with venom.

Honey bees use their mandibles for biting. These mandibles are located in the jaw area and work much like a pair of pincers.

Yes, female honey bees sting. In fact, they’re the only bees that can sting.

Worker bees (infertile female bees) have barbed stingers, meaning they can only sting once.

Male honey bees can’t sting. Male honey bees, or drones, are not born with a stinger like females. Instead, their reproductive organ takes up the space where the stinger would otherwise be located.

Drones also don’t do any work in the hive. They merely sit around, waiting to take flight for mating.

Do Honey Bees Die When They Sting?

The majority of honey bees die after stinging. Worker bees have barbed stingers, meaning their stinger is stuck in their victim after they sting. When they try to separate from their victim, the stinger will rip apart their abdomen.

Sometimes worker bees get lucky, and they can pull away after stinging, allowing them to sting twice.

The queen bee does not die after stinging. Since she has a smooth stinger, it won’t get stuck in the flesh of her target. Hence, she can sting as much as she wants.

Do Honey Bees Sting at Night?

Honey bees do typically not sting at nighttime. Honey bees sleep at night, meaning they aren’t around to sting.

It’s important to note, that if you disturb honey bees while they sleep, they will sting you. Honey bees have designated guard bees. These will sleep near the entrance to the nest, allowing them to hear when intruders are approaching.

If they sense danger, they’ll alert the rest of the colony, resulting in an attack on the intruder.

Related: Do bees sting at night?

Can All Honey Bees Sting?

No, not all honey bees can sting. As stated, the male honey bees (drones) are born without a stinger, as they need room for their reproductive organ. As they don’t have stingers, they can’t sting.

All the female honey bees can sting, including the workers and the queen.

There are certain species of bees (stingless bees) that can’t sting. These have evolved strong mandibles for biting instead.

Related: Do all bees sting?

The honey bee’s stinger is a barbed or smooth organ that the worker and queen bees use to defend the hive against intruders. Workers have barbed stingers, while queens have smooth stingers.

The stinger is located at the end of the honey bee’s abdomen, and it contains specialized organs called venom sacs. These release venom when the stinger pierces an intruder’s skin.

The stinger is about 1.62 mm in length but may vary depending on the size of the individual bee. [4]

When Do Honey Bees Sting?

Handling bees with care is the best way to avoid getting stung.

Beekeepers have mastered the art of handling bees, yet they’re still stung about 10 times per year.

How Often Do Honey Bees Sting?

Honey bees are not nearly as aggressive as their reputation makes them out to be. A honey bee worker can only sting once, hence they only use their stinger as a last resort.

This also means that honey bees don’t sting as much as most people believe.

If they can, they’ll try to combat intruders in other ways, such as forming a death ball around them, as well as biting.

How to Avoid Being Stung by Honey Bees

Honey bees are some of the most common stinging insects in the world, so it is good to know how to avoid being stung by them.

Stings can range from uncomfortable to life-threatening depending on how sensitive you are.

Here are some things you can do if you want to avoid being stung by a honey bee:

Do Beekeepers Get Stung Often?

While beekeepers spend a great deal of time around bees, they aren’t stung as much as you may think.

Beekeepers are stung approximately 10 times a year, sometimes less. They’ve learned how to behave around bees to avoid agitating them.

Studies show that beekeepers are more immune to bee stings than the average person. After being stung multiple times, they’ve developed a natural immunity to their stings. [5]

Related: Do beekeepers get stung when working with bees?

How to Treat a Honey Bee Sting

If you are stung by a honey bee, the first thing you should do is remove the stinger. You can do this by scraping it out with a fingernail, toothpick, or other sharp objects.

Do not pinch the stinger, as this will only inject more venom into your skin.

Once the stinger is removed, you should wash the wound. This will remove any excess venom.

After cleaning the sting, you can apply a cold compress to the area to reduce swelling. You can also take an over-the-counter pain reliever to help ease the pain.

If you are allergic to honey bee venom, you should seek medical attention after a sting. Symptoms of an allergic reaction can include difficulty breathing, chest tightness, hives, and swelling of the face or throat.

If you experience any of these symptoms, seek medical help right away.

Honey bees do sting, but they only do so when they’re threatened. As worker bees die after stinging, they only use their stinger as a last resort.

Honey bee workers die after stinging because they have barbed stingers. Their stinger will be stuck in the flesh of their victim, causing it to rip out their lower abdomen when the bee retreats.