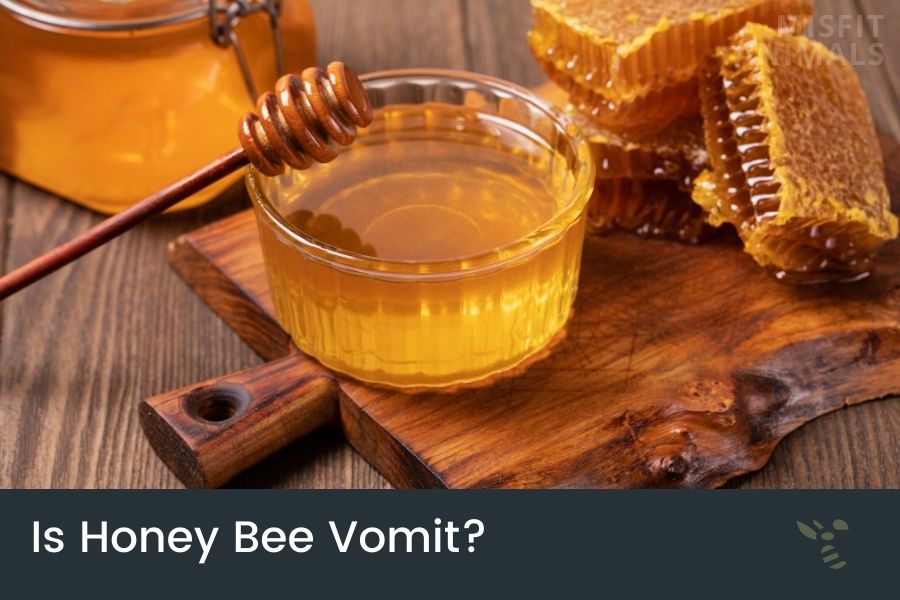 Honey made by honey bees is neither bee vomit, bee poop, or bee spit. Instead, it’s a special substance made from nectar. Bees do store the nectar in their honey stomach, but they don’t vomit it out.

A common question about honey is: ”what exactly is honey?”

When honey bees make honey, they follow a certain procedure. They collect nectar, whereafter the house bees will process it.

In this article, we’ll cover exactly how bees make honey, what processing it goes through, and whether it is some form of bee vomit or not.

Honey is a sweet, viscous food substance produced by honey bees. It is made from the nectar of flowers, which is collected by honey bees. When the bees make honey, they store it in wax honeycombs.

The taste, color, and texture of honey vary depending on the type of flower from which the nectar was taken.

Honey is used in a variety of foods and beverages and is also used as a sweetener in some medicines. In addition, honey has various other uses, including as a natural skin moisturizer and an ingredient in some hair products.

This sweet substance contains an abundance of beneficial ingredients, such as amino acids, vitamins, minerals, iron, zinc, and antioxidants. [1]

Some people believe that honey is bee vomit. This is not an accurate statement, but it’s understandable why some people would think so.

Bees don’t vomit honey, they regurgitate it. When a forager bee returns from its nectar-gathering excursions, it regurgitates the nectar and hands it over to a house bee.

There’s a distinct difference between regurgitation and vomiting:

No, honey is not bee poop either. When a bee has gathered enough nectar to return to its hive, they’ve stored in its “honey stomach” – a separate stomach, used to store nectar.

They don’t poop the contents out but rather regurgitate it.

No, honey is not bee spit. While honey does reside in bees’ mouths from time to time, it’s primarily nectar. When bees make honey, they essentially reduce the moisture content in the nectar.

They may do so with a “mouth-to-mouth” method, where they draw out moisture and add an enzyme called invertase.

Honey Stomach of the Honeybee

The crop of the honeybee (also known as the honey stomach or honey sack) is where bees store the raw nectar they collect. It is a specialized stomach and doesn’t work the way its other stomach does.

The honey stomach (crop) essentially works as a filtering system. Bees will fill up their crop with nectar, pollen, and solid food, whereafter it’ll filter out anything that has to be digested. [2]

At the end of the crop, there is a one-way valve. This is where any food that doesn’t belong in the honey stomach goes. After it’s left the honey stomach, it’ll be digested in the “true stomach”.

Since nectar doesn’t need to be digested, it never makes it to the true stomach.

The honeybees crop doesn’t secrete any enzymes into the nectar. Rather, it stores it until it is full. Once in the honey stomach enzymes are added that cause disaccharides to be digested into monosaccharides.

The honey stomach can hold up to 50% of the bee’s body weight in nectar.

Why Is Honey Not Bee Vomit?

Technically, honey is not bee vomit, as honey bees don’t vomit but regurgitate the contents of the honey stomach. The difference between vomiting and regurgitating is control.

When vomiting, you also expel partly digested food (food from the stomach). Honeybees don’t digest nectar in their honey stomach. Instead, it’s processed by an array of enzymes which transforms it into honey.

There are many differences between vomit and regurgitation, the most obvious of which is that vomit is a bodily waste product, while regurgitation is not.

Vomiting is often caused by a virus or bacteria, while regurgitation is done in a controlled manner. Vomit is expelled from the mouth and is composed of stomach contents, saliva, and bits of food.

Honeybee regurgitation is when nectar that was eaten comes back into the mouth (from the crop). They do this to hand it over to house bees.

How Is Honey Made?

Honey is a delicious and nutritious food made by bees. It is produced from the nectar of flowers which is collected by forager bees.

When the bee returns to the hive, the nectar is regurgitated and passed from bee to bee until it is finally deposited in a honeycomb. The bees work together to reduce the level of moisture of the nectar.

Related: How long does it take bees to make honey?

The first part of the process of producing honey is for foraging bees to gather nectar [3]. Worker bees will fly off in every direction, looking for flowers that are rich in nectar.

They’ll then use their tongues to collect the nectar from as many plants as possible.

When a forager bee returns to the hive, she’ll regurgitate the nectar, handing it over to “house bees”. These bees are responsible for indoor operations.

House bees will then start reducing the moisture content of nectar. Nectar is almost 70% water when it’s first collected. Bees reduce this to about 20%.

When they’ve successfully reduced the moisture contents, while adding enzymes such as invertase, they’ll place it in honeycomb.

3. The Honey Is Store in Honeycomb

Bees construct honeycombs in their nest. These are used for two things:

After the house bees have successfully removed the majority of the water in nectar, essentially turning it into honey, they’ll place it in a honeycomb cell. Afterward, they cap the cell with additional beeswax, where it’ll stay until it’s needed.

Related: How long does it take bees to make a honeycomb?

What Is Honey Made Out Of?

Honey mostly consists of sugars glucose and fructose and is considered a supersaturated solution, because of its high potency. It’s a sweet, thick liquid that’s made by bees. Bees use nectar from flowers to produce honey.

There are more than 300 honey varieties.

Here are 5 types of honey:

1. Blossom honey: This type of honey is made from the nectar of flowers. It can be found in many different countries and has a light, floral flavor.

2. Eucalyptus honey: This type of honey is made from the nectar of eucalyptus flowers and has a strong, refreshing flavor. It is only produced in Australia and New Zealand.

3. Fireweed honey: The nectar of fireweed flowers produces pungent, dark-colored honey that has a very unique taste. This type of honey can be found in Canada and the United States.

4. Clover honey: From places such as North America, Europe, and Australia, clover honey is the most common type of honey in the world. It has a mild, sweet flavor and is often used as table honey.

5. Manuka honey: This type of honey is made from the nectar of the manuka tree and is only found in New Zealand and parts of Australia.

6. Vulture bee honey: Vulture bees, known as meat-eating bees, make honey out of proteins instead of carbohydrates. This makes for a unique type of honey.

Invertase is an enzyme found in bees. Invertase is a group of enzymes that help transform sucrose into glucose and fructose. In other words, invertase helps bees turn nectar into honey.

Located in the stomachs of worker bees and some larvae, this enzyme breaks down sucrose (a disaccharide) into glucose and fructose (monosaccharides).

When You Eat Honey Are You Eating Bee Vomit?

No, you’re not eating bee vomit, when you’re eating honey. The belief that honey is bee vomit comes from the fact that when bees process nectar, they regurgitate it.

This process is called trophallaxis, and it is how the bees transfer food from mouth to mouth, processing the nectar.

Bees need to store the nectar in the honey stomach when foraging. Hence, when they return, they have to transfer it back up to their mouths, in order to hand it over.

Honey made by honey bees is not bee vomit, poop, or spit. It’s nectar that the bees have processed. Bees remove moisture contents and introduce enzymes, which essentially alter the chemical structure of nectar, turning it into honey.

When bees return from foraging trips, they do regurgitate the honey. Regulation is different from vomiting, as it’s controlled.

Bees store the nectar in their honey stomach while foraging (called the “crop”), and regurgitate it when returning to the hive.