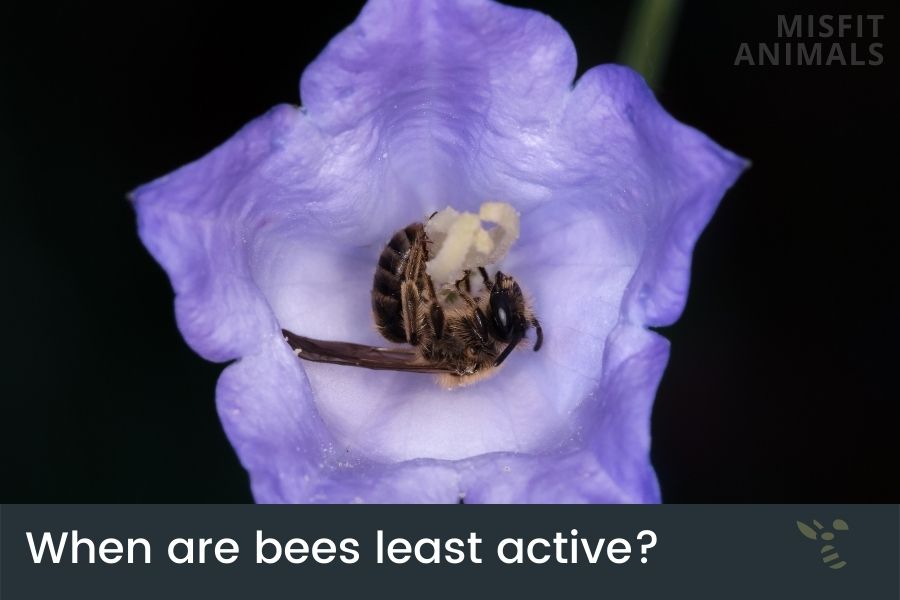 There are a lot of misconceptions about bees. These tiny insects have been around for millions of years and have evolved in ways that help them survive in various climates.

In this article, we’ll talk about the activity patterns of bees, specifically when they’re least active.

Bees will usually be least active during the winter, as it’s too cold for them to forage. They’ll also be inactive at night, as most bees sleep during the night.

What Time of Day Are Bees Least Active?

Bees are the least active during the night. Bees are diurnal creatures, meaning their main activities take place during the day. They will forage, expand their hive, and take care of brood while the sun is up.

Some bees are nocturnal, meaning they’ll forage at night instead of during the day.

When the sun sets, they’ll return to the hive and settle down for the night.

Some workers will be awake or asleep near the entrance to the hive, in order to react quickly if any threats occur in the darkness of the night.

What Time of Day Do Bees Stop Pollinating?

Most pollinating activity stops in the afternoon when the sun starts to set. At this point, bees have been going all day, and are looking to rest.

Pollination is not only determined by the time of day. Weather conditions are also a major factor for bees. Heavy rain and extreme winds will stop bees from venturing out.

When these factors are present, pollination will also come to a halt.

What Time of Day Are Honeybees Least Active?

Honeybees are the least active at night and during the winter months.

They will begin to fly back towards the hive as dusk falls, and they can become more defensive and aggressive as their activity slows down. Generally, you should avoid opening a beehive near sunset to avoid getting stung.

What Time of Day Are Bumblebees Least Active?

What Time of Day Are Bees Least Aggressive?

It is unknown exactly when bees are least aggressive, but we do know some of the factors that can affect aggression in bees.

Hence, bees are least aggressive when the weather is good (warm, no wind, and no rain), as well as during the day.

Most stinging does happen during the day, between 10 a.m. and 2 p.m., as this is when bees are most active.

It’s best to avoid bees during the late morning and early afternoon, as this is when most bee activity takes place.

When more bees are around, there’s a higher chance of being stung. Stay away from beehives at these times.

What Season Are Bees Least Active?

To figure out when bees are least active, we have to know when they’re most active.

The bee population is at its highest when flowers are blooming and it’s warm outside.

On the contrary, bees are least active during the cold winter months. While bees don’t hibernate, they will go dormant. Their only movement will be vibrations to generate heat. [2]

If they left their hive, they would become exhausted before making it back. A few species are used to colder weathers, such as Alpine Bumblebees. These can fly in altitudes higher than Mt. Everest.

Honeybees gather in a big group around the queen to keep her warm.

Related: Where do bees go in the winter?

Workers will stay inside their hives all winter unless they run out of supplies. Some days are warm enough for foraging though. Bees can venture out on these days.

They’ll start flying outside to collect nectar from flowers and water when the temperature rises again.

Are Bees Active in the Winter?

No, most bees aren’t active in the winter months. It’s too cold to fly, and most flowers won’t be producing any nectar.

In these months, bees will be dormant. Most bees don’t hibernate, but they’re either staying completely still or only vibrating for heat.

One study has found that bee activity does slow during rain. Researchers in this study had to rely on artificial weathering methods, though, so it’s hard to extrapolate these results into the natural world.

One hypothesis for why bee movement slows down is that they cannot regulate their body temperature while flying in high winds, which forces them to stop flying.

Another study has found that bees tend to decrease their activity when the temperature is lower than 10 degrees Celsius, which makes sense because cold weather generally slows down most chemical processes.

It doesn’t mean that all bee activity will cease in cold weather; it just means they are less active overall.

At What Temperature Do Bees Become Inactive

Every beekeeper is all too familiar with the perils of winter when it comes to their bees. When the temperature drops below a certain threshold, worker bees become inactive.

Experts previously thought that the critical temperature was around 7°C (45°F). Still, new research has found that point to be lower, just 4°C (39°F), the equivalent of a mild spring day.

Do Bees Work When It’s Cold Outside?

Bee colonies living in temperate climates usually stop flying when it gets too cold. The colony reduces its activity, and some worker bees even go into a dormant state.

However, the queen bee keeps laying eggs to maintain the population of young bees, though she will lay significantly less.

And just like humans, honeybees need to keep their homes warm. They keep themselves warm by clustering together and producing heat by vibrating.

What Time of Day do Bees Come Out?

Most flowers will start producing nectar in these timeframes as well.

When Is Bee Season?

The term “bee season” can refer to either the time of year where bees are most active or a specific period designed to create a honey flow for beekeepers. In this case, we will focus on the first definition.

The “bee season” also varies depending on where you live.

For those in Northern Hemisphere climates, early spring is when bees become more active as winter ends.

For those in the Southern Hemisphere, bee season starts in early autumn and ends in the spring.

When Are Bees Most Active?

Bees are most active in the late spring and early summer. This is when the weather is warm and sunny.

A bee’s daily activity starts when the sun rises. If it’s too cold though, bees will wait inside their hive until the temperature rises.

Bees are most active during the middle of the day when temperatures are highest.

Related: When are bees most active?

However, some species of bees do not fall under this category. Nocturnal bee species, even though there aren’t many of them, will be active at night.

Their main activities take place under the darkness of the night. They will forage, take care of the hive, and care for brood at night, instead of the day.

Do all bees return to the nest at night?

Yes, most bees will return to the nest at night to rest. After being active all day, they need to rest.

As mentioned, some species are nocturnal, meaning they’ll fly at night, collecting nectar and pollen.

However, some bee species have evolved to be nocturnal or crepuscular as a way to avoid predators.