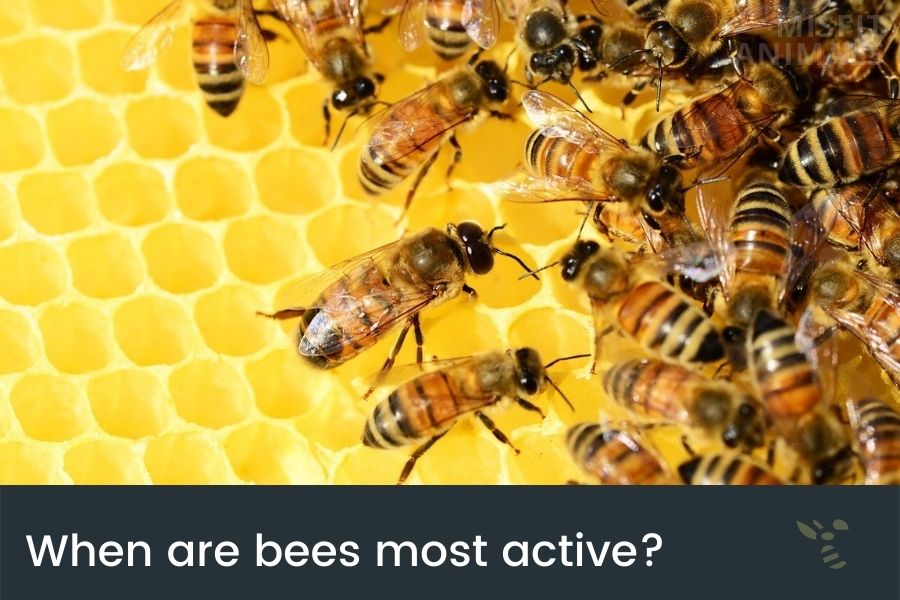 Bees have certain routines that they stick to, day in and day out. The behavior of bees varies depending on the time of day, as well as the time of year, though.

Wondering what time bees are most active?

That’s what we’ll discuss in this article, where we’ll reveal when bees are most active, when they forage, and much more.

What Time of Day Are Bees Most Active?

Most beekeepers will tell you that bees are most active in the early afternoon, around 2 p.m. Activity will start in the morning when the sun rises and will fade out when the sun goes down.

It’s not just a black and white question though, as it does differ depending on climate, species, and other factors.

Honeybees in the temperate climates are most active during the afternoon and early evening hours when it is warmest [1], while Africanized bees (sometimes called “killer bees”) are most active in the early morning, or even at night, as the temperature is more tolerable.

Beekeepers try to take advantage of periods when their bees are most active. This way, they can make sure that their bees visit as many flowers as possible and bring back many nectar or pollen.

For example, some beekeepers put out empty beehives for honeybees to roost during the evening hours.

What Time of Day Do Bees Forage?

Most bee species will forage all day. They will head out in the morning, gathering nectar and pollen from nearby sources.

As these nearby flowerbeds are depleted of resources, the bees will fly farther and farther away.

A few nocturnal bees will begin foraging when the sun sets and will stop when the sun rises – the opposite of most bees.

What Time of Day Are Bees Most Aggressive?

Bees are protective animals that often sting to defend their hives or themselves. The most dangerous time to be around bees is when they’re at their hive since they will be on high alert.

Bees are generally less aggressive early in the morning but become more aggressive as the sun rises and temperatures rise, though they won’t be aggressive unless you pose a threat [2].

Bees are also more inclined to turn aggressive fast when disturbed at night when they’re resting.

Bees in a hive can sense when it is getting hotter outside, and when the temperature rises above 90°F, these insects will become restless.

They will also be easily agitated if the weather is bad (raining or windy), or if it’s very cold.

Are Bees Active in the Morning?

Bees are very active in the morning, as most flowers open and produce nectar around this time. But, if the weather is bad, they won’t be very active. Weather plays a big part in bee activity.

This activity is not limited to a particular time of day, as bees tend to be very busy all day long.

Bees pollinate flowers during daylight hours, but will also be performing other tasks during other hours of the day.

Weather patterns, time of day, and season all play a role in bee activity. For example, bees tend to be very active during the spring due to the intense blooming of flowers.

What Hours of the Day Are Bees Most Active?

Bee activity generally peaks around 10 a.m. and 2 p.m. These hours make up the ‘prime work time’ for bees. During this time, they are most active and able to collect nectar and pollen from plants.

At noon, bees may take a break if it’s too hot outside. However, they become active again between 3-5 p.m.

Bees tend to get slower and tired as the night goes on, especially around 7-9 p.m. It’ll be too dark for them outside, and they will stop working for the rest of the day.

When Are Honeybees Most Active?

Honeybees are most active in the spring and summer when it isn’t too hot or too cold for them to fly out to forage.

The optimal foraging temperature for a bee is between 57-100°F. That is when they will leave the hive to gather pollen and nectar from flowers and return with these nutrients to bring back to the hive.

What Season Are Bees Most Active?

Bees are most active in late spring and early summer, when it is warm outside and when their hive is at a comfortable temperature.

When it starts to become cooler in the fall, many bees start to forage later in the day when it is warmer. In the winter, when it’s cold outside, most bees stay in their hives, clustering up to keep warm.

During the first warm days of spring, foraging will begin, and around April-May, most bees will start to swarm and mate.

What Month Are Bees Most Aggressive?

Some species of bees tend to be more aggressive towards fall, as the temperatures drop, and they prepare their queen for the winter.

They’ll be easily agitated, as the temperatures are some days too low for foraging, and nectar and pollen production comes to an end.

Some bees have even been observed foraging at night. These are called nocturnal bees. At least 26 species of bees are known to be active at night.

These species can be further divided into those that only fly after dark and those that will fly both day and night.

Do Bees Come Out at Night?

Yes, some bees come out at night. Nocturnal bees will take care of all of their main activities, such as foraging, under the darkness of the night.

This activity pattern comes with both advantages and disadvantages. There may be fewer predators, but there’s also lees nectar, as the diurnal bees have already collected their share.

When Do Bees Come Out?

Bees will start appearing in spring. This is the start of bee season after bees have been hiding during the winter. The queen will lay more eggs, the workers will forage for nectar and pollen, and the first males are born.

They will come out in the morning and turn in for the night.

However, in many areas, bee activity coincides with times when crops are flowering. In addition, bee activity also varies from region to region and from species to species.

When Are Bees Least Active?

Bees are least active during the winter months. At this time of year, it’ll be too cold for bees to fly out, hence they have to stay in their hive. They will be clustered up in a big ball around the queen to keep her safe and warm.

They’re also least active at night. Bees sleep for 5-8 hours a day, which most of them do at night.

Related: When are bees least active?

Bees are most active during the daytime in the spring and summer. At these times, temperatures are good, and flowers are blooming, meaning the bees can forage again.

Bees will be active throughout the entire day, and will return to their hive at night to sleep.