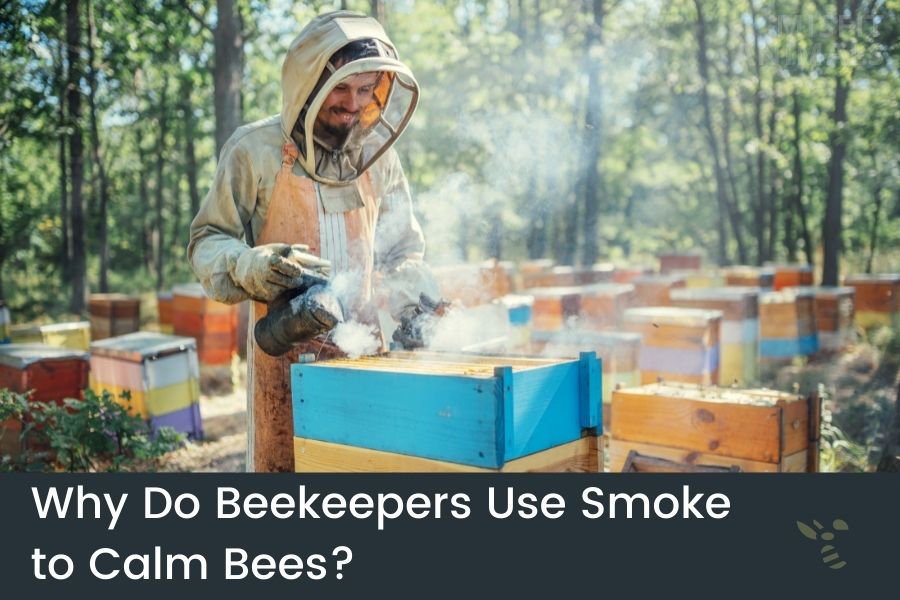 Beekeepers use smoke because it prevents them from turning aggressive. Smoke blocks bees’ sense of smell, which keeps them calm.

It may seem like an odd technique, but it’s a technique that’s been used for more than 2,500 years, dating back to Ancient Egypt.

It simply makes bees more compliant, making the whole experience better for the beekeeper, as well as the bees.

Beekeepers have been using this method for centuries, and it’s still one of the most effective ways to handle stressed-out bees. Keep reading to find out how beekeepers use smoke and why it works so well.

Why Do Beekeepers Smoke Their Hives?

Beekeepers smoke their hives to keep the bees calm and to make it easier for them to work with the hives.

Even though beekeepers are more immune to bee stings [1], it still hurts being stung by bees. Especially when attacked by thousands at a time. Hence, they try to avoid it.

Beekeepers can use smoke when harvesting honey, doing hive maintenance, or if they’re removing the queen.

Makes It Easier to Handle the Bees

One of the reasons why beekeepers use smoke is because it makes it easier to handle the bees. The smoke calms the bees down and makes them less likely to sting.

Smoke also helps to disguise the scent of the hive, making it harder for the bees to track down their queen.

The smoke from a bee smoker is created by adding wood chips or leaves to the smoker. The smoke is generated by heating up the contents of the smoker, which causes wood to smolder and release smoke.

Beekeepers are experts at avoiding bee stings. In general, beekeepers are only stung about 10 times per year. They’re stung so few times because they know how to handle bees, and how to avoid unnecessary stinging.

One of the methods they implement is using a bee smoker. Apart from smoke, they also make sure not to wear any strong scents, and make use of protective gear.

Related: Do beekeepers get stung?

What Is the Smoke Beekeepers Use?

The smoke beekeepers use is a blend of different fuels. The most common type of fuel used is wood, but other materials such as corn cobs, burlap sacks, and cardboard can also be used.

The smoke is created by lighting the fuel and blowing it into the hive.

There are both organic and chemical bee smokers. The chemical ones may be faster and easier to use, but organic solutions are always the healthiest when caring for animals.

How Does Smoke Affect Bees?

Smoke affects bees by masking the alarm pheromones they release when someone attacks them or their hive.

A common misconception is, that smoke calms bees down. This is not exactly true, as smoke rather prevents them from turning aggressive. Already aggressive bees can be calmed down though.

When bees feel threatened, or if someone invades their hive, they’ll start producing and releasing alarm pheromones. [2]

The alarm pheromones work exactly like an alarm: other bees will smell the pheromones, which trigger a natural fight-response. The bees will hence be more inclined to attack, sting and bite.

The smoke blocks bees’ sense of smell, effectively making them unable to smell the alarm pheromones.

Why Does Smoke Calm Bees?

Smoke calms bees by blocking their sense of smell and masking pheromones. When bees can’t smell, they can’t smell the alarm pheromones that trigger an aggressive response.

Smoking bees is a delicate art though, as there are several mistakes a beekeeper can make. These include smoking too much, using too hot smoke, or not letting the smoke affect the bees before removing the lid to the hive.

Bees will only keep calm, as long as there isn’t too much smoke. If that’s the case, they’ll start panicking instead.

Related: Why does smoke calm bees?

How Do Beekeepers Avoid Getting Stung?

Beekeeping is an ancient practice that has been around since the times of the Egyptians. However, it wasn’t until the 19th century that modern beekeeping techniques began to be developed.

These days, there are several methods employed by beekeepers in order to avoid being stung during normal apiary procedures, including using a smoker, wearing protective gear, and knowing when to handle the bees.

One way that beekeepers avoid getting stung is by using a smoker. A smoker is a device that produces smoke from burning organic materials. The smoke calms the bees and makes them less likely to sting.

Beekeepers also wear protective clothing to avoid getting stung. This includes a veil to protect the beekeeper’s face and clothes that cover the entire body, such as thick pants and jackets. [2]

Many beekeepers use a specially constructed beekeeping suit, which protects their entire body (including the head).

This suit is often made as a single piece, which prevents any possibilities of bees flying into their clothes.

During stormy weather, bees become agitated and aggressive, and they can’t fly out of their hive. By avoiding handling bees in bad weather, beekeepers can avoid being stung.

Beekeepers know when it is dangerous to handle the bees because they have their beekeeping experience to rely on. When it’s too windy, rainy, or cold, beekeepers make sure to leave the bees alone [3].

Beekeepers use smoke to make it easier to handle the bees. They use smoke when harvesting honey, removing the queen or doing hive maintenance. The smoke helps the bees remain calm when the beekeeper is working.

Smoke doesn’t actually calm bees down, but rather prevents them from turning aggressive or becoming agitated. When bees sense an attack on their hive, they release alarm pheromones.

These pheromones tell other bees in the hive, that an attack is imminent, and that they should defend themselves against the attacker.