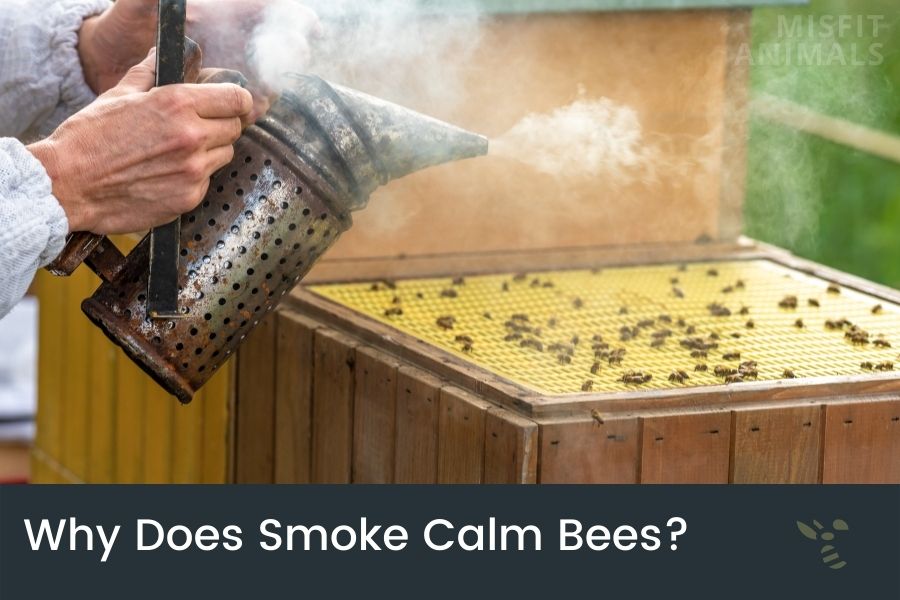 Smoke calms bees by masking alarm pheromones. When bees feel threatened, they release pheromones to alarm others. As the smoke masks it, the bees never realize that there’s any danger.

While it may seem counterintuitive that a burning substance would be calming to the honeybee, this is very much the truth.

Bees are known for their protective behavior in the hive, and when they sense danger or any threat outside of the colony, they swarm around it aggressively.

However, when beekeepers have to handle bees, they will often use a smoker before opening up the structure.

In this article, we’ll explore the science behind why smoke calms bees.

Why Does Smoke Calm Bees?

Smoke doesn’t calm bees, but rather prevents them from turning agitated and aggressive. This is due to the smoke working as a masking agent, preventing the entire beehive from smelling alarm pheromones.

Near the entrance of the hive, the beehive always has guard bees [1]. These are responsible for detecting and alarming when threats approach.

When they do, they release alarm pheromones (2-Heptanone) [2], which triggers an aggressive response in the rest of the hive. They’ll all come rushing to help attack the threat.

Said in technical terms, smoke reduces the electroantennographic response of the bees’ antennae, making them unable to smell.

In recent studies, beekeepers have found that the use of bee smokers causes less stress to honeybees. The smoker uses warm vaporized liquid as well as smoke to calm the bees and inhibit their natural inclination to sting.

Surprisingly, bees react very differently to smoke than humans. While soot and ashes from smoke can be a nuisance for us, smoke works as a soothing stress-reliever for bees.

As stated, smoke masks alarm pheromones that bees release when they are in danger.

These pheromones cause agitated and aggressive behavior, causing them to swarm around the attacker, stinging and biting them.

While smoke can reduce the threat response found in bees, another study suggests that the amount of venom produced is also affected. Where bees will inject venom under normal circumstances, this is not always the case, if they’re affected by smoke.

The smoke is designed for specific properties that make it ideal in calming bees.

With smoke swirling about, it is hard to tell if a forest fire is happening nearby. Smoke can confuse bees and lead them to abandon their hives, in order to get to safety.

What Is a Bee Smoker?

A bee smoker is a tool used to smoke bees before handling them. The smoke is intended to keep them calm and to avoid stinging. It’s designed to generate smoke from a variety of substances, hence the name “smoker”.

What Does Smoke Do to Bees?

Smoke is not necessarily harmful, but it can have consequences if used incorrectly.

Under normal circumstances, and if used correctly, smoke will calm the bees, working as a safe, and natural, stress-reliever. This helps the beekeepers easily harvest honey, or handle the bees.

If used incorrectly, the smoke can harm the bees. Frequent mistakes new beekeepers make are:

Are Bees Repelled by Smoke?

Smoke can repel bees. When bees sense burning of any kind, they begin to evacuate their colony, quickly fueling up on honey and flying out of their nest.

Killer bees, also known as Africanized Bees, are a more aggressive subspecies of bees. These lethal insects kill quickly and efficiently. Large amounts of stings (50-100) can cause nausea and vomiting. [3]

As such, it is essential to control killer bee populations when many of them are present to avoid stinging, especially among personnel.

The best way to control killer bees is through the use of smoke.

Smoke calms the aggressive nature of killer bees, making them much easier to handle. Smoke masks alarm pheromones which usually cause a swarm to attack any threats.

Killer bees respond to smoke just like regular honeybees, hence smoke is a great option when trying to keep them calm.

No, smoking bees isn’t cruel, as long as it’s done correctly. When the proper amount of smoke is used, and as long as the smoke isn’t too hot, the bees won’t be harmed. They’ll merely remain calm.

In order for a beekeeper to harvest the surplus honey, they use smoke that puts them into a docile state.

This practice is a widely used technique by beekeepers because it has been proven that using smoke to calm bees does not hinder the quality of honey produced.

Why Do Beekeepers Use Smoke?

Beekeepers use smoke for different reasons depending on the situation, but it’s mainly to keep them calm, to make it easier to handle the bees, as well as avoid any stinging.

While studies suggest that beekeepers develop a better immune system towards bee venom [4], it can still be painful. They don’t want to get stung if they can avoid it. Hence, they use smoke, as well as other protective measures.

Related: Why do beekeepers use smoke?

Beekeepers use bee smokers to keep bees calm. This prepares the hive for harvesting and can calm some bees that might be on guard.

When bees are calm, they’re much easier to handle. This makes the overall harvesting process quicker. The bees will soon after the smoking be back to a regular state.

2. Makes It Easier to Extract Honey

Beekeepers use bee smokers to make it easier to get honey. When they smoke the bees, some of them will fly away, while others remain docile within the hive. They simply become relaxed due to the smoke.

Because they are less active, extracting honey is able to happen safely and more efficiently.

One of the most important reasons beekeepers use bee smokers is to avoid unnecessary stinging.

Bees release an alarm pheromone when they are threatened, and when they sting. This attracts other bees to attack as well.

This can be prevented by using a bee smoker during inspections of the hive. The smoke subdues the bees and allows for easier inspection without getting stung.

How Does a Bee Smoker Work?

How Do You Use a Smoker?

If you’re looking to use a smoker, but never have done it before, here’s how you use it.

First, you must gather some organic material to burn. Fill the fire champer up with this (either dried grass, wood shavings, pine needles, or similar).

These are lit, and the smoke produced from them fills up the smoker. As enough smoke has been built up, make sure that the smoke isn’t too hot, as this will harm the bees.

Once this is done, simply squeeze the bellow, which allows the smoke to escape the smoker. Aim it directly at the hive.

Some beekeepers use chemical smokers, where they don’t need to light any organic material. Here, the smoke is produced by chemicals, which assures the right temperature.

Where to Buy a Bee Smoker

If you want to learn about bee smokers, the place to go is a farm supply store.

Bee smokers are used by beekeepers all over the world. If you have a local beekeeper association, you can ask them where they buy their supplies and what brand of smoker they recommend.

How to Calm Bees Without Smoke

Smoking bees with a bee smoker is a common method of calming them in order to work in their hive. However, using honey bee smoke can be harmful to the bees and also takes time. Fortunately, there are other options that can calm bees without using smoke

The best way to calm bees without smoke is to stay calm, avoid any sudden movements, and stay quiet. You should generally avoid sending any threatening signals.

You should always make sure to wear protective gear when handling bees, as they can show irregular behavior.

Another way of calming bees is to apply calming scents around the hive.

The most common scent used by traditional beekeepers is smoke from burning pine needles or leaves. Other alternatives include using lemongrass oil or lavender essential oil.

Smoke calms bees by masking the alarm pheromones they release when threatened or attacked. The smoke reduces the bees’ sense of smell, effectively preventing them from smelling alarm pheromones.

Using smoke on bees is considered harmless, as long as it’s done correctly. As long as the temperature of the smoke isn’t too hot, and the appropriate amount of smoke is used, it’s safe for the bees.