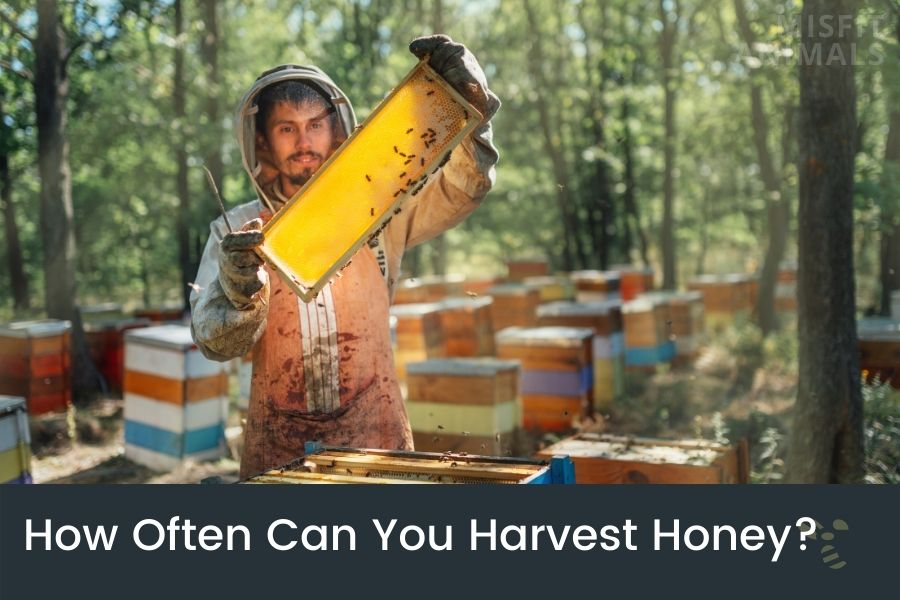 Most beekeepers can typically harvest honey 2-3 times a year. In better seasons, they may be able to harvest 4-5 times, while bad seasons may only entail a single harvest.

The process of harvesting honey is also not as simple as one might think.

Beekeepers must be careful when removing the wax cappings that are covering the cells where the honey has been stored.

There are specially designed tools available in order to help with this process.

In this article, we’ll talk more about harvesting honey, how much bees produce a year, and how beekeepers can get the most out of their beehives.

How Often Can You Harvest Honey

Bees’ honey production depends on a number of factors, such as the amount of available nectar, the health of the hive, weather, and more.

The most important factor is nectar flow.

The nectar flow is when the native flowers are in full bloom. This is often in the period between early April and late June. If the weather is bad during these times, bees won’t be able to produce as much honey.

If fewer flowers are available, either due to local climate changes, or human interference, it can affect the seasonal harvest as well.

How Often Can You Harvest Honey From a New Hive

Beekeepers should wait until the second season of a new hive to start harvesting honey.

During the first season, it is best not to take any honey from the hive as the bees need all the honey they can make to survive the winter.

After this period, beekeepers should look to harvest honey every 6 weeks towards the end of the season (June-September).

Related: How Long Does It Take Bees to Make a Hive & Honeycomb?

How Often Can You Harvest Honey From an Established Hive?

Beekeepers can most often harvest honey every 4 to 6 weeks from a strong, healthy, and established hive, during the months of June until September.

Beekeepers should remember not to harvest honey too late, as bees need honey to survive the winter.

The frequency of harvesting depends on a  number of factors, including:

For example, when it is winter and cold, you shouldn’t harvest, as the honey bees need enough food for themselves to survive the winter months.

Also, some hives are stronger than others which may yield more honey.

In the end, how often you collect honey is up to you, but if you take too much and the hive isn’t able to replace that amount, then you could end up killing all your bees.

Related: How Long Does It Take Bees to Make Honey?

How Many Times Can You Harvest Honey in a Year?

Beekeepers can harvest 2-3 times per year. Some years with strong nectar flow can yield 4-5 harvests, while a bad year may only yield 1 harvest.

The ideal situation for honey bees to produce lots of honey is a long, warm summer. [1]

How Much Honey Can You Harvest From a Hive?

How Much Honey Can One Hive Produce per Year?

A standard beehive will produce 25 lb (11 kg) of honey in a single year, while bigger, or stronger, hives can produce up to 60 lb.

This is dependant on nectar flow, as well as other conditions.

The warmest part of the year, being around the summertime, with higher temperatures, means more activity for bees, which means more nectar is collected to make into honey.

How Much Honey Do Bees Need for Winter?

In the fall, as winter draws near, it is important for beekeepers to know how much honey to leave their bees. If there isn’t enough honey for the bees to eat during the winter months, they’ll starve and die.

In general, a strong hive of healthy bees needs about 60-100 pounds of honey stored away in order to survive the winter.

Packing away more honey than that provides a buffer in case of a long winter or other problems. The extra honey can also be used as a food source during early spring if flower nectar is scarce.

Related: Where Do Bees Go In the Winter?

Do You Have to Harvest Honey From a Beehive?

While you don’t need to harvest honey from a beehive, there are several negative consequences if you don’t (seen from a beekeeper’s perspective).

When you don’t harvest honey from a beehive, they don’t have enough room for excess honey. The population will become too great, and the nest will eventually become overcrowded, which will trigger swarming.

A part of the colony will leave, and honey production will be reduced in the near future.

What Happens to Honey if Not Harvested?

Honey has a very long shelf life if kept sealed tight at room temperature [2]. There are many unlucky beekeepers that open their storage room only to find that all of their harvested honey has crystallized.

What Happens to Honey if Not Harvested?

For beekeepers, several of these points are bad news. In nature, they’re quite natural, and won’t pose a threat to the colony in the long term.

What Happens if You Harvest Too Much Honey?

Beekeepers must be careful not to harvest too much honey during the summer. This will decrease the bees’ food supply and can threaten the well-being of their bees.

If beekeepers were to take more than can be replaced, there wouldn’t be enough food for the hive come wintertime.

Beekeeping is a very delicate process. The beekeeper needs to understand how much honey they can take each time without risking the well-being of their bees over the winter.

If you don’t use the honey, it can eventually go bad, though it takes about 2 years if stored at room temperature.

When Should You Stop Collecting Honey?

When to harvest honey, and when to stop harvesting honey, is delicate questions. The answer is almost always “it depends”.

There are some definitive time periods when it comes to harvesting honey.

When winter is near, beekeepers should stop collecting honey, as bees need food for the winter months. Honey harvesting usually stops around September but may be extended if September is warmer than usual.

Most beekeepers designate one or more supers as food storage for the bees, leaving a full super for the bees to feed on during the cold months. This is done to avoid food shortages and hive damage.

How Do You Harvest Honey?

The first step when harvesting honey, is to make sure the bees are calm when handling them. This will avoid unnecessary aggression, and make the overall process easier and more enjoyable.

To get good results, here are a few tips that can help you harvest honey without too much effort:

Three main tools are used for harvesting honey: a bee brush, an escape board, or a fume board.

Do You Only Harvest Capped Honey?

Yes, generally, honey is only harvested from capped honeycombs cells. When bees store honey, they will cap the honeycomb cells they’ve placed it in with beeswax, the same material they use to make the honeycomb.

They use this method of storing, as it protects the honey, and makes sure it’s stored safely.

A general rule of thumb is to only harvest when 80% of the frame is filled with cured and capped honey.

Most beehives produce about 25 lb of honey per season, which is harvested over 2-3 times by beekeepers. Some hives can produce up to 60 lb per year.

Beekeepers can harvest honey every 4 to 6 weeks in the harvesting season (June-September). In a bad season, with a low nectar flow, beekeepers may only get a single harvest.