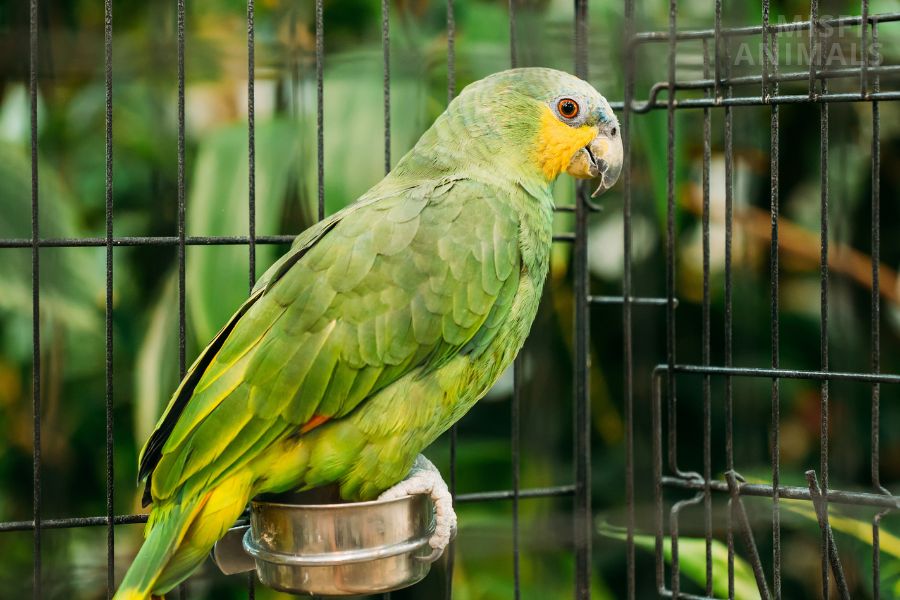 The color of animals varies depending on their natural adaptations. Some animals are green for camouflage purposes, while others absorb pigment from the plants they eat.

In this post, we’ll take a look at ten different animals who take on an astounding green color, from the crocodile to the European green lizard.

The color green is associated with nature and freshness. When it comes to animals, there are plenty of green creatures out there.

The Emerald Tree Boa is a beautiful, green snake found in the rainforests of South America. They are one of the most popular snakes in the pet trade and are known for their docile nature and stunning coloration.

Emerald Tree Boas grow to an average length of 6-8 feet, with some individuals reaching up to 10 feet in length[1]. They are slender snakes with large eyes and smooth, glossy scales.

The coloration of Emerald Tree Boas is what makes them so popular; they are typically a bright green with white or yellow markings on their sides.

Emerald Tree Boas are forest dwellers and are most often found in trees. They are excellent climbers and use their prehensile tails to help them move through the branches. As ambush predators, they lie in wait for their prey to come within reach before striking.

Their diet consists primarily of rodents and birds, but they have been known to eat lizards and frogs on occasion.

Agapostemon is a genus of bees in the family Megachilidae, the leaf-cutter bees. The genus occurs in the Americas, from Canada to Argentina, with the highest diversity in Central America.

The Agapostemon species are small to medium-sized bees and are often brightly colored metallic green or blue[2]. They collect pollen on their abdomen (rather than on the hind legs, as most other bees) and build nest cells from leaves, which they cut into circular pieces with their mandibles.

The best-known species in the genus is Agapostemon virescens, which lives in eastern North America. This species is commonly known as the “green metallic bee”, and is one of the most common bees in its range.

It is a pollinator of many crops, including:

It is a small frog, with females reaching a maximum size of 3.4 cm (1.3 in) and males only slightly larger at 3.8 cm (1.5 in). The frog’s back is lime green and its sides are pale blue. It has red eyes with vertical black pupils, and orange toes. The skin on the frog’s undersides is translucent, allowing the orange color of its viscera to show through.

The red-eyed tree frog is nocturnal and arboreal. It spends the day sleeping on leaves, camouflaged by its coloring. At night, it comes out to feed on insects.

The frog breeds in trees near water, with the female laying up to 40 eggs on the undersides of leaves overhanging water[3]. The tadpoles drop into the water below and develop into frogs in about eight weeks.

The red-eyed tree frog is native to Central and South America, from Costa Rica south to Bolivia. It is found in a variety of habitats, including rainforests, cloud forests, and secondary forests.

The chameleon is a small, reclusive creature found in the tropical regions of Africa, Asia, and Madagascar. Chameleons are known for their ability to change the color of their skin to match their surroundings, which helps them to camouflage themselves from predators.

There are approximately 160 different species of chameleon, ranging in size from a few centimeters to over half a meter in length. They are generally shy and reclusive animals and prefer to spend most of their time alone in the trees.

Their diet consists mainly of insects, which they catch with their long, sticky tongues. Chameleons have poor eyesight, but make up for it with their keen sense of hearing.

The luna moth (Actias luna) is a near-globally distributed silkmoth. It is among the largest moths in North America, with a wingspan of up to four and a half inches. Luna moths are green with pale yellow spots on their wings.

Luna moths are considered a species of “least concern” by the International Union for Conservation of Nature (IUCN), but they are declining in numbers due to habitat loss and the use of pesticides.

The luna moth has a life cycle that consists of four stages:

Larvae hatch from eggs and feed on leaves for about six weeks before spinning a cocoon and pupating. Adult moths emerge about two weeks later and live for only about a week, during which time they mate and lay eggs.

Crocodile is the common name for a member of the order Crocodilia, which also includes alligators, caimans, and gharials. Although there are many species of crocodiles, they share certain basic characteristics:

Crocodiles are large reptiles. They can grow up to 20 feet (6 meters) in length, with a long, muscular tail that helps them swim swiftly through water. Their bodies are covered in tough, scaly skin that protects them from predators and the elements.

Crocodiles are carnivores and will eat anything they can catch, including fish, reptiles, mammals, and birds. They kill their prey by dragging it into the water and drowning it.

The green mamba (Dendroaspis angusticeps) is a long, thin snake that is bright green in color. It is found in Africa, where it is one of the most feared snakes. The green mamba is very venomous and can kill a human within hours if not treated immediately.

Seek medical help immediately if you are bitten by a green mamba.

The green mamba is a tree-dwelling snake, often found in forests, but can also be found in savannas and rocky areas. It is timid and tries to avoid contact with humans as much as possible. They turn aggressive if threatened.

The European green lizard (Lacerta viridis) is a species of lacertid lizard that occurs across much of Europe. It is also known as the common green lizard, western green lizard, and occasionally field Lizard.

This species is relatively small with adults reaching lengths of between 15-20cm. The body is slender with a long tail which can be twice the length of the body. The head is relatively large with well-developed eyes.

The back and flanks are green in color with some darker bands or spots. There is often a row of white or yellowish spots along the sides. The belly is white or pale green.

This species is found in a variety of habitats including woods, meadows, and gardens. It is often seen basking in the sun on rocks or walls. The European green lizard is an insectivorous species feeding on a range of small invertebrates.

There are many different types of Amazon parrots, but the most common type kept as a pet is the yellow-headed Amazon parrot.

Amazon parrots are social birds in need of interaction with their owners. They are very active and need a lot of space to fly and play. Amazon parrots can live for up to 50 years in captivity, so they are a long-term commitment.

These small insects are found in many gardens and are often considered to be pests. However, they are also an important part of the ecosystem and help to control populations of other insects.

Are There Any Green Mammals?

No, there are no green mammals. All mammals are covered in fur or hair, and no mammal has green fur or hair. There are, however, a few green reptiles that are often mistaken for mammals. These include the Green Anole (Anolis carolinensis) and the Green Iguana (Iguana iguana).

What Are a Few Rare Green Animals?

There are a variety of green animals, but some are rarer than others. A few examples of these include the Gerenuk, the Emerald Tree Boa, and the Green Anaconda.