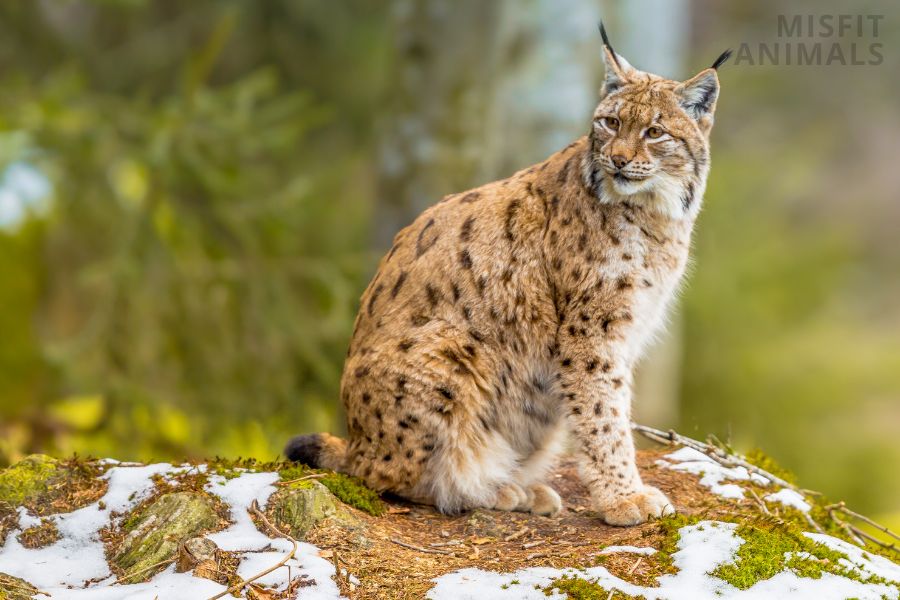 European animals are often characterized by their ability to survive in forests, as well as in both warm and cold weather. Iconic European animals include the bear, bison, wolverine, lynx, and wolf.

Europe is a vast and diverse continent, with more than its fair share of interesting animals.

From the familiar (like deer and wild boar) to the exotic (such as brown bears and wolves), here are ten of the most popular European animals.

Whether you’re a nature enthusiast or enjoy spotting wildlife, these creatures are well worth keeping an eye out for on your next trip to Europe.

There are many different types of animals that call Europe their home. From the big and ferocious to the small and timid, there is an animal out there for everyone.

Reindeer are a species of deer native to Europe. They are the only deer where both sexes grow antlers. The males shed their antlers in late winter, while the females keep theirs until after they give birth in the spring.

Reindeer are browsers, meaning they feed on a variety of plants, including shrubs, mosses, and lichens[1]. In the winter, when food is scarce, they also eat bark and twigs.

They are well-suited to their Arctic habitat; their fur is thick and insulates them against the cold, and their hooves are large and split, which helps them to walk on soft, wet ground and snow.

As social animals, they live in herds of up to several hundred individuals. The herd is led by a dominant male, and the members of the herd will stay together until the breeding season when they will disperse into smaller groups. Reindeer mate in late summer and the females give birth to a single calf in the spring.

The European bison is a large, even-toed ungulate of the family Bovidae. They are the largest extant terrestrial animals in North America, Europe, and Asia.

Male bison are typically 6.5 feet tall at the shoulder and weigh about 2200 pounds, while females are generally a bit shorter and lighter, averaging 5.5 feet tall and 1800 pounds. They live up to 20 years in the wild and 30 years in captivity.

Bison are herbivores, grazing on grasses and other plants[2]. They are nomadic creatures, moving around to find new food sources. Bison travel in herds of anywhere from a few dozen to several thousand individuals.

These massive herds were once a common sight on the North American plains, but their numbers have dwindled due to hunting and habitat loss.

The European boar, also known as the Wild Boar, is a native animal to Europe and parts of Asia. It is the largest member of the pig family and can weigh up to 150kg. The boar has been hunted since prehistoric times, and its meat is still popular today.

The wild boar is a shy animal but has been known to attack humans if provoked. It is an important animal in the ecosystem, as it helps to keep the forest floor clean by eating acorns and other nuts.

The wolverine is a solitary, nocturnal animal with short fur that can be brown, rusty-brown, or creamy-yellow[3]. It has black markings on its face and often a light-colored stripe running down its back.

This animal is found in North America, Europe, and Asia:

Wolverines are very strong for their size and have been known to kill animals much larger than themselves, such as moose and deer. They also eat smaller prey, such as rodents, rabbits, and birds. Wolverines scavenge carrion (dead animals) if they can find it.

The European badger has a greyish-brown coat with a light-colored stripe running down its back. It is a stocky animal with short legs and a long body. Adult European badgers weigh between 9 and 11 kg (20 and 24 lb).

It is a nocturnal creature, spending most of the day in its setts (underground burrows). Setts can be extensive systems of tunnels and chambers that house several badgers.

European badgers are very territorial animals and fiercely defend their setts from intruders. They are part of the small group of omnivorous, feeding on a wide range of food items such as earthworms, insects, small mammals, fruit, and vegetables.

Lynx are shy, solitary animals. They are very efficient hunters, and their main prey is roe deer. Lynx live in forests throughout Europe, and their fur is prized for its warm, waterproof qualities.

Despite their large size, lynx are very secretive animals and are rarely seen by humans. These solitary hunters are most active at dawn and dusk, and they use their sharp claws and teeth to take down large prey such as deer.

If you’re lucky enough to spot a lynx in the wild, you’ll be able to tell them apart from other cats by their long legs, large feet, and tufted ears. Lynx is an important part of the European ecosystem, and they play a vital role in controlling the populations of their prey animals.

It is a relatively small snake, with a maximum length of about 90 cm (3 ft). The average length is 60 cm (2 ft), and is either brown or grey, with darker cross-bands.

The European viper is venomous, but its bite is usually not fatal to humans. It can cause severe pain, swelling, and bruising. If left untreated, the bite can lead to infection and tissue damage.

If you are bitten by a European viper, seek medical attention immediately. The bite should be cleaned and a bandage applied. You may also need to receive antivenom.

Red Deer are the largest deer species in Europe. They are found in forests across the continent, from Scotland to Russia. The animals are reddish-brown, with males (stags) having large antlers. Red Deer are herbivores, eating leaves, grasses, and other vegetation.

The European red deer is the largest deer species in Europe. Male red deer (stags) can weigh up to 250 kg (550 lb) and females (hinds) up to 150 kg (330 lb). The red deer’s coat is reddish-brown, with males having large antlers.

The Golden Eagle is a very large raptor or bird of prey. Adults typically weigh 4-7 kg (9-15 lb), with an average wingspan of 2 m (6.6 ft). The wings are broad and the tail is long, making the bird look very large when in flight.

The plumage is dark brown with a golden nape and breast, which gives the bird its name. Juvenile birds have more mottled plumage and can be confused with other large raptors such as the Bald Eagle.

It is found in North America, Europe, and Asia. It inhabits areas with few trees or rocky cliffs. The bird typically preys on rodents but can take larger prey such as deer or carrion. It also eats reptiles, birds, and fish. Like most other birds of prey, it is a powerful flier and can reach speeds of up to 320 km/h (200 mph).

The Golden Eagle is not endangered, but it faces threats from human activity such as hunting, pollution, and habitat loss. The bird is protected in many countries, and there are efforts to help populations recover.

The goldfinch, also known as the European goldfinch, is a small passerine bird in the finch family. It is native to Europe, North Africa, and western Asia. The goldfinch has a red face and yellow wing bars.

Adult males have black wings and tails with a white wing bar. Females are similar but have a brownish tint to their plumage. Goldfinches are found in open habitats such as meadows, parks, and gardens. They feed on a variety of seeds and insects.

This bird is a member of the finch family. Finches are small to medium-sized birds with stout bodies and short, conical beaks. They are found in a variety of habitats including forests, grasslands, and deserts. Finches are seedeaters and typically feed on the ground. Some species are also known to eat insects.

It is a common bird in Europe, North Africa, and western Asia. It has a large range and is not considered to be at risk of extinction.

What Is the Most Dangerous Animal in Europe?

Polar bears are the most dangerous animals in Europe. They are large, powerful predators that can kill and eat humans. Humans are not their natural prey, but polar bears will attack people if they are hungry or feel threatened. Polar bear attacks are rare, but they can be deadly.

What Is Europe’s Biggest Animal?