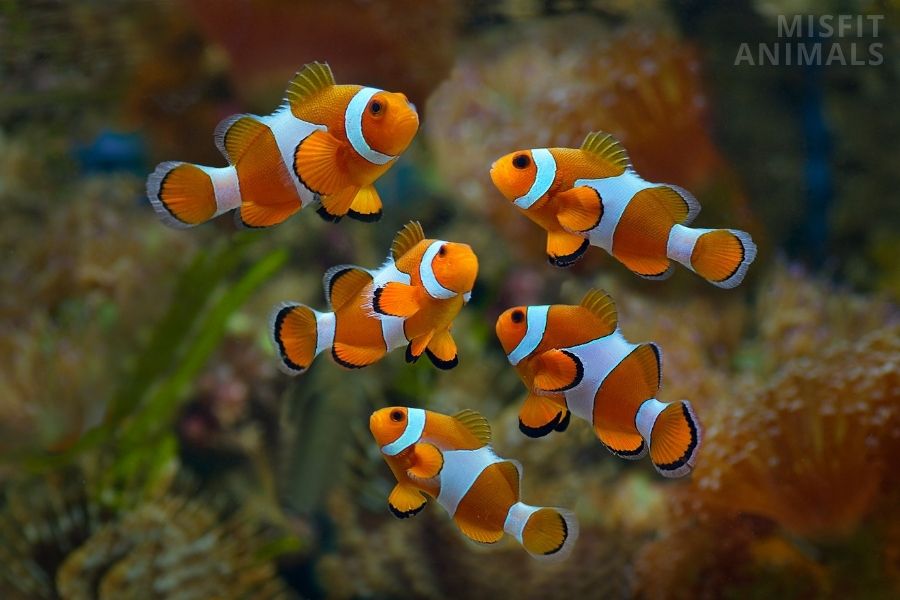 Do you love the color orange?

If so, you’re going to love this list of the 10 of the most captivating orange animals.

From quirky little raccoons to beautiful lions, these animals are sure to amaze you.

Did you know that there are orange animals in the world? Not just oranges, but entire animals that are the color orange.

Here are some of the most interesting and amazing orange animals out there.

The Monarch Butterfly is one of the most well-known and easily recognizable orange animals. This creature is found in North, Central, and South America, and is famous for its orange and black wings.

The Monarch is a member of the family Nymphalidae, which includes some of the most colorful butterflies in the world.

It gets its name from the fact that it is often found near milkweed plants[1]. Milkweed is a poisonous plant, but the Monarch butterfly has developed a resistance to its toxins. This allows them to feed on the milkweed without being harmed by it.

The Monarch butterfly is one of the few animals that can consume milkweed and use its toxins for its own defense.

When the Monarch butterfly larva hatches from its egg, it is black and white. As it matures, it gradually turns orange and black. These butterflies typically has a wingspan of 3-4 inches (7-10 cm). The females are usually slightly larger than the males.

The tiger is one of the most feared and revered animals in the world. This massive animal is found in Asia and is the largest member of the cat family. Tigers are apex predators, meaning they sit at the top of the food chain.

This formidable creature is known for its orange and black stripes, which provide camouflage in its natural habitat.

The tiger is an endangered species, with only an estimated 3,200-3,500 individuals remaining in the wild. This decline is due to a number of factors, including habitat loss, hunting, and conflict with humans. Despite its status, the tiger still commands a great deal of respect from people all over the world.

Tigers are incredibly powerful. They are built for hunting. They can weigh up to 660 pounds (300 kg) and measure up to 11 feet (3.3 m) in length, and have sharp claws and teeth that are perfect for taking down large prey.

The assassin bug is a predatory insect that is found in tropical and subtropical regions around the world. This small creature gets its name from its habit of preying on other insects.

The assassin bug uses its long, sharp beak to pierce the body of its victim and inject it with venom[2]. This venom paralyzes the prey and allows the assassin bug to suck out its body fluids.

The bug is a member of the family Reduviidae, which includes some of the most notorious predators in the animal kingdom. These insects are known for their aggressive nature and their ability to take down prey that is much larger than they are.

The assassin bug is typically orange or red in color, with a dark brown or black head. This coloration provides camouflage against the leaves and flowers of its natural habitat.

In North America, orange newts are a common sight. These small orange lizards are not dangerous to humans, but they can give a nasty bite if provoked. Orange newts are often seen in gardens and yards, basking in the sun or hiding in the shadows.

These little orange lizards are a welcome sight in many gardens, as they help to control pests. Orange newts eat just about anything that moves, including insects, spiders, and even other small lizards.

While they are not the most efficient pest control method, orange newts can help to keep your garden free of harmful critters.

If you have orange newts in your garden, be sure to provide them with plenty of hiding places. These lizards like to hide from predators, and they will also take shelter from the heat of the sun in cool, shady spots. A few rocks or logs placed around your garden will give orange newts the perfect place to hide.

Clownfish are orange animals that are popular in both the pet and aquarium trade. There are several reasons for their popularity, including their orange coloration. Clownfish are also relatively easy to care for, making them a good choice for beginner aquarists.

In the wild, clownfish live in coral reefs and are associated with anemones[3]. The anemone provides the Clown Fish with shelter and protection from predators, while the clownfish help to keep the anemone clean.

The clownfish is also known for its role in the popular movie Finding Nemo. In the movie, a clownfish named Marlin is searching for his son Nemo, who has been captured and taken to an aquarium.

While the movie does not accurately portray the care required for clownfish in captivity, it has helped to make them one of the most popular fish kept in home aquariums.

Corn snakes are a type of orange rat snake, native to the southeastern United States. Corn snakes are relatively easy to care for, and their small size makes them a good choice for people who don’t have a lot of space.

Corn snakes are known for their docile nature, which makes them a good snake for handling. They get their name from the fact that they are often found in cornfields.

They are excellent climbers and often climb into the rafters of barns and sheds in search of food. Corn snakes are non-venomous and kill their prey by constriction.

While corn snakes are orange, they can come in a variety of other colors, including albino. Albino corn snakes are white with orange spots and are popular among snake collectors.

The orange Sea Cucumber is an unorthodox type of orange animal. They are found in tropical and subtropical oceans throughout the world. Orange Sea Cucumber typically grows to be about 20 cm long but can reach up to 1 m in length.

These orange animals are important members of the ocean ecosystem and help to keep coral reefs clean by eating algae and other small organisms.

Sea cucumbers are sometimes called “sea pigs” or “sea cows” because of their tubular shape and slow movements.

Orange Sea Cucumber is harvested for its meat, which is considered a delicacy in some cultures. The animals are also used for their leather, which is made into wallets, belts, and other leather goods. They are sometimes used in traditional Chinese medicine.

The red fox is the most common fox in North America. It is also the largest member of the true foxes, as well as the most distinctively colored. The red fox’s coat is bright rusty red, with a white-tipped tail. The underparts are generally white.

Red foxes living in North America are typically between 2 and 4 feet long, not counting the tail, which can add another 9 to 16 inches. They can weigh anywhere from 10 to 15 pounds.

They are adaptable animals, living in a wide variety of habitats. They are most commonly found in woodlands, but can also be found in marshes, grasslands, and even deserts.

Red foxes also make their homes in urban areas if there is enough cover for them to hide from humans.

Golden Lion Tamarin is a small monkey with bright orange fur. It is found in the Atlantic coastal forests of Brazil.

The Golden Lion Tamarin is an endangered species, with only a few thousand left in the wild. It is a social creature, living in groups of up to 12 individuals, a proficient tree-climber, and feeds primarily on fruits, insects, and small vertebrates.

It is an important species for conservation, as it is a keystone species in its ecosystem. The loss of the Golden Lion Tamarin would cause major changes to the structure of the forest.

The orange starfish is one of the most beautiful and popular starfish found in the world. As their name suggests, they are bright orange in color and have five arms. They are found in warm shallow waters on coral reefs and in tide pools.

Orange Starfish are predators and feed on small fish, crustaceans, and mollusks. They use their arms to crawl along the bottom of the ocean and capture their prey.

Despite its vibrant color, the orange starfish are very fragile creatures. They are often injured or killed by humans who step on them or handle them roughly. They are also at risk from predators such as sea urchins and fish.

What Animal Has Orange Spots?

Why Is A Tiger Orange and Black?

A tiger’s orange and black stripes provide excellent camouflage in the forests and grasslands of Asia where they live. The vertical stripes make the tiger look taller than it is, and help to break up its outline so it is more difficult for prey to spot. The stripes also help to camouflage the tiger as it stalks through long grass.