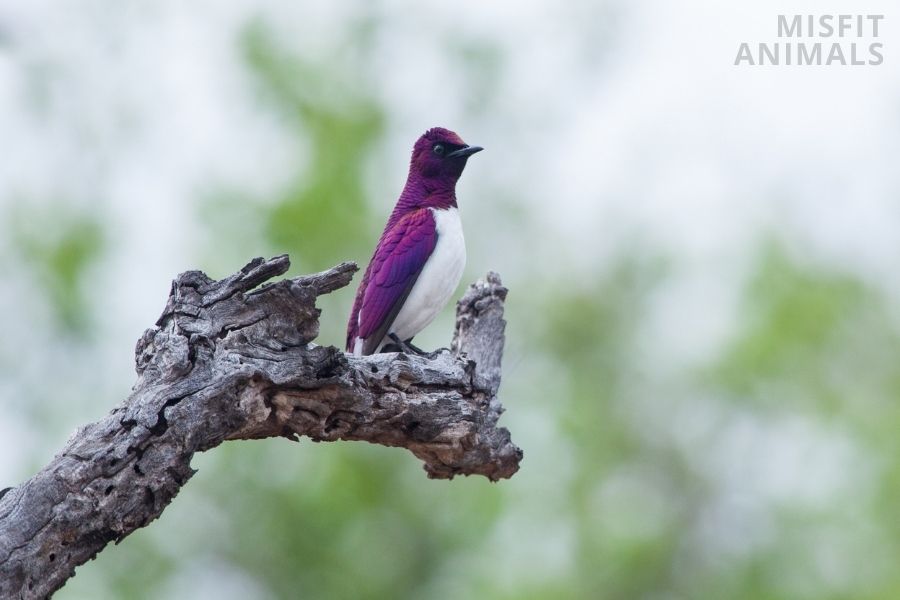 There are only a few purple animals in the world. These include sea snails, starlings, beetles, starfish, butterflies, frogs, orchid dottyback, and a few others.

When you think of the animal kingdom, you probably think of lions, tigers, and bears.

But what about the animals that are a little more… purple?

While they may not be as common as their brown and black counterparts, these ten creatures are definitely worth checking out.

From a vibrant violet bat to an ethereal blue jellyfish, these animals are sure to astound and amaze. So if you’re looking for something different in the animal world, be sure to check out our list of the ten most amazing purple animals.

Few creatures on Earth can boast of being purple. And even fewer animals are a deep, vibrant purple.

Here are some of the most interesting purple animals found in nature:

Violet sea snails are a type of mollusk that can be found in tropical and subtropical waters. Their vibrant purple hue is created by a pigment called porphyrin, which is also responsible for the color of other sea creatures like octopuses and squid.[1]

While they are beautiful to look at, violet sea snails are quite dangerous because they are venomous. Their venom is used to stun prey. It is also harmful to humans if we come into contact with it.

If you’re lucky enough to spot a violet sea snail while you’re out exploring the ocean, be sure to admire it from a safe distance.

Violet-backed starling is a species of starling in the family Sturnidae. It is found in Ethiopia, Kenya, Somalia, South Sudan, and Uganda. Its natural habitat is dry savanna.

The Violet-backed Starling is a small to medium-sized passerine bird. Adults have dull violet upperparts and heads, with some greenish gloss on the wing feathers. The underparts are paler violet, becoming whitish on the belly and vent. There is a thin white line above the eye, and the bill is black.

Juveniles have browner upper parts and lack the green gloss.

This starling feeds mainly on insects, although it will also take berries and other fruit. It forages in pairs or small groups, often following larger animals such as cattle to pick up insects that have been disturbed.

Purple Beetles are one of the rare purple insects that can be found in nature. While their striking color may make them seem rare, they are common in many parts of the world.

There are many different species of purple beetle, but they all share a few common features. Firstly, as their name suggests, they are all purple. This can range from light lavender to deep violet, but all purple beetles are easily recognizable by their intense color.[2]

In addition to their color, purple beetles also tend to be small. Most species are under an inch long, and some can be as small as a fraction of an inch. This makes them one of the smaller beetle groups.

Purple starfish are one of the most popular types of starfish. They are often found in tide pools and on reefs. Purple Starfish are very beautiful, with their purple colors and intricate patterns.

This starfish is not only pretty to look at, but they are also interesting creatures. They can regenerate their arms if they are lost. They can also produce a toxin that helps them to deter predators.

The Purple Emperor Butterfly is a species of butterfly found in Europe and Asia. The adult butterfly has a wingspan of up to 8.5 cm (3.3 in) and is a deep purple color with white spots on the wingtips.

The caterpillar of this species is black with yellow stripes running along its body.

This beautiful butterfly is one of the largest butterflies found in Europe. It is most commonly seen in woodlands, where it feeds on tree sap and rotten fruit. The Purple Emperor is also known to visit gardens, where it feeds on nectar from flowers.

The Purple Emperor is not currently considered to be at risk of extinction. The population has declined in recent years, likely due to habitat loss and fragmentation.

The Indian Purple Frog (Nasikabatrachus sahyadrensis) is a species of frog native to the Western Ghats of India. It is also known as the pig-nosed frog or pignose frog due to its snout-like nose.

The Indian Purple Frog is an endangered species and is listed as such by the IUCN.

The Indian Purple Frog is a large frog, measuring up to 7 cm (2.8 in) in length[3]. It is purple or pink, with darker spots on its back. The frog’s snout is protruding and pig-like, hence its common name.

It is a burrowing frog and spends most of its time underground. It only emerges during the monsoon season to breed.

The Orchid Dottyback is a species of sea slug, a marine gastropod mollusk in the family Chromodorididae. It is a colorful animal found in the Indo-Pacific oceans.

The Dottyback gets its name from its coloration which is similar to that of an orchid flower. Black dots surround the border of the mantle and there is an orange line running along the length of the body.

This slug can grow to be about 2.5 cm in length. It is a carnivorous animal and feeds on small invertebrates. It is only found at depths of 1-30 m. As a relatively common species, it is not considered to be endangered.

The orchid dottyback is a popular aquarium fish. It is a hardy animal and can adapt to a wide range of conditions.

Due to its aggressive nature towards other tank mates, it should only be kept with fish that are larger than itself. It is also important to provide plenty of hiding places in the aquarium as this fish likes to hide.

Violet-crowned Woodnymphs are purple birds that live in the tropical forests of Central and South America. They are small birds, measuring only about 4 inches long. The males have violet crowns, while the females have greenish- brown crowns.

Both sexes have purple throats and breasts, with white bands on their wings.

Woodnymphs are insectivores, feeding primarily on ants and termites. They use their long beaks to probe into crevices and tree bark to find their prey.

As shy birds, they are often heard before they are seen. Their song is a soft trill that sounds like “twee-twee-twee.”

The Purple Grenadier, also known as the black widow, is a species of venomous spider found in North America The female of the species is well known for its ability to kill and eat the male after mating.

The Purple Grenadier is considered to be the most dangerous spider in North America due to its highly toxic venom.

Even though they are highly venomous, this spider is shy. They only bite if provoked. The venom of the Purple Grenadier is 15 times more toxic than that of the rattlesnake and has been known to kill humans within hours. The Purple Grenadier’s venom is so powerful that it can cause anaphylactic shock in some people, which can be fatal.

If you are bitten by a Purple Grenadier, seek medical attention immediately as the venom is very dangerous.

The indigo snake is a large, non-venomous species of snake found in North and South America. They are typically dark blue or black in color, with some individuals exhibiting iridescent scales.

Indigo snakes are shy and reclusive by nature and are rarely seen by humans. When they are encountered, they will usually attempt to flee rather than fight.

These snakes are excellent swimmers and climbers and are often found near water sources such as rivers and lakes. Their diet consists primarily of other animals, such as rodents, lizards, and birds. They typically mate in the spring, and the female will give birth to live young in the summer.

Why Are Purple Animals Rare?

There are a few different reasons why purple animals are so rare. One is that the pigment that produces purple, called biliverdin, is not found in very many plants or animals. Biliverdin is actually a by-product of the breakdown of hemoglobin, which gives red blood cells their color. In order for an animal to be purple, it would need to have a lot of hemoglobin in its blood.

Are There Any Purple Mammals?

No, there are no purple mammals. Mammals are a class of vertebrate animals that includes the likes of bats, whales, and humans. There are over 5,000 species of mammals, but not a single one is purple.