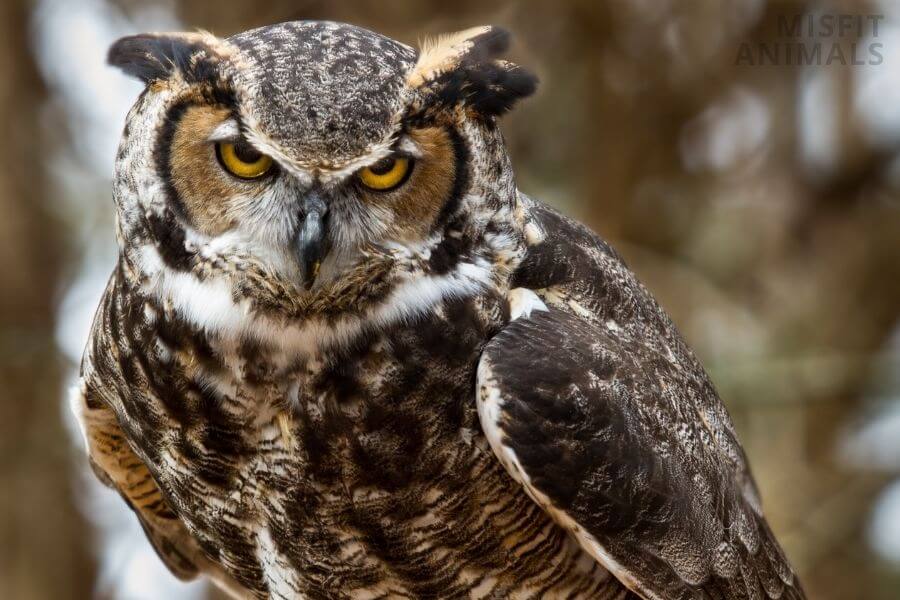 The great horned owl is one of the most widely distributed owls in the world. If you’re lucky enough to see a great horned owl in the wild, be sure to take advantage of the opportunity – they’re something to behold.

In this post, we’ll take a closer look at these majestic creatures and discuss some of the things that make them unique. So if you’re interested in learning more about great horned owls, read on!

Have you ever seen a Great Horned Owl? They are massive birds with big, round eyes and a deep hooting voice. You can often see them perched in trees or even hunting along roadsides.

Great horned owls have a powerful build and can be quite ferocious when threatened. In addition to its hunting skills, there are a few other interesting facts about these ferocious birds of prey that you might want to know.

The great horned owl is one of the largest owls in the world and has distinctive “horns” on its head. These horns are not used for fighting. The true purpose is yet to be understood by humans.

There are more than 20 subspecies of great horned owls. However, some of them aren’t true subspecies and are only samples of clinal variations.

The great horned owl is a large owl that can weigh up to four pounds. They have brown feathers with white spots and a large head with two horns (from which they get their name).

Being one of the biggest and heaviest owls, the great horned owl is a large species of owl. They have a wingspan of up to five feet, and their eyes are very large. Their tails are short, being around seven to ten inches long.

Most great horned owls are either grey or brown, but will most often also have white and black spots throughout their plumage.

They are impressive in size, and their distinctive appearance makes them easy to identify. The large horns are their most unique physical attribute.

The legs, feet, and talons of these animals are very powerful. Their feet can reach up to eight inches (20 cm) from talon to talon, and they can grip with a force of 30 pounds.

Great horned owls are one of the most widespread owl species in the world, living in North America, South America, and parts of Europe and Asia. They can be found in a variety of habitats, including forests, farmlands, and suburban areas.

Great horned owls typically nest in tree cavities or abandoned buildings[4]. You’ll often find them building their nests in juniper, cottonwood, and beech among others.

Their mating grounds can be found from the subarctic of North America all the way down to South America. These owls are the second-most widely distributed owls next to barn owls, a tribute to their adaptability.

Great horned owls are territorial animals. They stake out an area and defend it against other owls. These birds are also monogamous, meaning they only have one mate for life.

Great horned owls are nocturnal, which means they are active at night. This allows them to take advantage of a wide variety of prey items. They have developed adaptations for nighttime hunting, such as enhanced night vision and stealth flight.

Their general behavior is typical to most owls and birds of prey. They’re territorial, driven to hunt, and are opportunistic hunters.

Overall, great horned owls are fascinating animals with a variety of interesting behaviors. Thanks to their adaptability and prevalence, they play an important role in the ecosystem.

The great horned owls are opportunistic predators and will eat a variety of prey items. Their diet includes small mammals, such as rabbits and squirrels, as well as birds, including waterfowl, songbirds, and raptors.

Great horned owls eat anything they can get their talons on. They’re primitive in their prey selection, as they simply hunt what’s around. While primarily hunting small mammals, they also eat birds, reptiles, amphibians, and insects[5]. They have even been known to scavenge on carrion.

They use their excellent hearing and vision to locate prey items. Once an owl locates its prey, it will swoop down and attempt to seize it with its powerful talons. The owl will then proceed to kill the prey with its sharp beak.

The great horned owl has few predators, with golden eagles and northern goshawks occasionally preying on them. However, the main threat to their populations comes from anticoagulant rodenticides and pesticides, which can poison the owls.

The great horned owl is a long-lived bird, with a lifespan of up to 20 years in the wild. In captivity, they can live for up to 25 years.

The female lays two to four eggs, and the chicks hatch after about 28 days[6]. The young owls stay with the parents for up to 10 weeks. Great horned owls only use one nest per year until they build another nest.

Great horned owls have been listed as “Least Concern” by the IUCN. There are currently 6 million great horned owls globally. Although the population is considered healthy, there are some threats to the species.

The main threat to great horned owls is habitat loss. They require large areas of forest or other natural habitats to survive. Development and deforestation can reduce the amount of suitable habitat available for owls.

How do great horned owls hunt?

When hunting small mammals, great horned owls typically sit and wait for their prey to come close. Once they get close enough, the owl will fly out and catch it. They are also known to perch on a high spot and watch for prey to come by before swooping down on it.

How fast is a great horned owl?

A great horned owl can fly up to 40 mph.

What kingdom do great horned owls belong to?

Great horned owls are a part of the kingdom Animalia. They are in the class Aves, which is the group of animals that have wings and feathers. Owls are in the order Strigiformes, which means they have forward-facing eyes, a hooked bill, and membranous ears.

Great horned owls have been known to attack people on occasion, but it is important to note that these birds are usually shy and timid creatures. They only attack humans when threatened.

Yes, great horned owls do lay eggs. The average clutch size is around three to four eggs. Additionally, the eggs are incubated by the female owl for around 28 days. The young owls will then fledge from the nest around two months after hatching.

What is special about the great horned owl?

The great horned owl is one of the largest owl species in North America. They are easily recognizable by their large size, brown plumage, and prominent “horns” on their head. What makes the great horned owl unique is its wide range of habitats. They can be found in forests, grasslands, deserts, and even urban areas. They are also one of the most adaptable owl species, able to survive in a variety of climates.