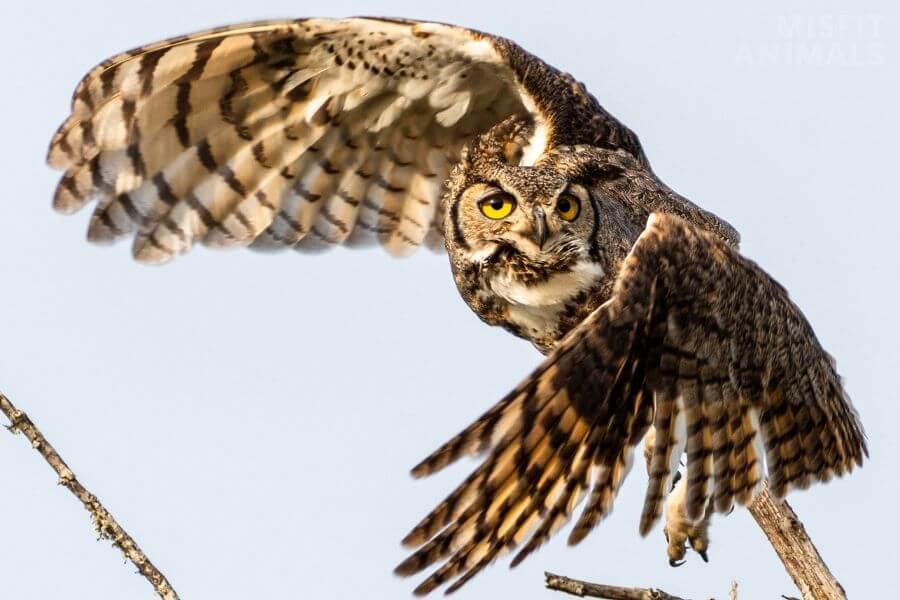 Great Horned Owls eat a variety of animals, from small insects to medium-sized birds. They’re large in size, and can hence take on larger prey than most other owls.

The great horned owl, one of the largest owls, is known for taking down large prey. They don’t shy away from a fight.

But what do they really eat?

In this guide to the great horned owl’s diet, we will explore what these owls in the wild typically eat, as well as some of their favorite (and not-so-favorite) prey items.

So if you’re curious about what this impressive bird preys on, read on!

Great horned owls (Bubo virginianus) are large birds of prey with two distinctive plumage features: the feather tufts on their heads, known as “plumicorns,” and their large yellow eyes.

This owl is the biggest of all owl species, which allows them some interesting opportunities when it comes to prey.

Being a bird of prey, these large owls hunt for food. They’re carnivores, meaning they eat meat, which they primarily hunt for at night. They are also very adaptable birds, with an extremely large range, meaning they can eat a wide variety of prey.

What Do Great Horned Owls Eat?

Great horned owls eat just about any animal they can catch and kill, including small mammals, birds, reptiles, and insects.

These large owls, common to North America, have a diverse diet that ranges from small mammals to large kinds of birds. While their day-to-day feeding behavior is largely dependent on what prey is readily available, and what their local competition will tolerate, they mostly eat mammals and birds.

Mammals are the prey of choice for great horned owls. Mammals are typically abundant in most regions, and they’re easy to hunt.

The following small mammals are hunted by the great horned owl:

Great horned owls are birds, but this doesn’t stop them from feeding on other birds, and often quite large ones. They’re known to take down different raptors, including hawks, falcons, and large osprey.

They’re great flyers, and as they hunt at night, stealthily, they can easily overpower their prey.

However, there are some examples of more common prey than others. While they can take down larger raptors such as ospreys and peregrine falcons[2] they don’t often do so, as it’s easier to hunt rabbits or other slower animals.

Great horned owls typically don’t actively hunt for reptiles and fish but may do so when other sources of food are lacking. This prey includes lizards, snakes, various fish, and sometimes turtles.

Insects make up a small part of a great horned owl’s diet. They will hunt and eat insects they can find, including the following:

While insects are small, they do provide plenty of protein. This is important to birds of prey, as they only feed on protein. Their digestive system can’t process plants.

Not all species eat the same. Depending on their habitat, they’ll have access to other food sources. Hence, great horned owls from South and North America don’t eat exactly the same.

What Do Great Horned Owls Eat In The Wild?

Great horned owls mostly eat mammals in the wild. These make up the largest portion of their diet, followed by birds.

Great horned owls are opportunists when it comes to food. They will eat anything that is available to them given their large size. As long as available prey is small enough for them to kill, they will do so.

Besides adult birds, they also eat the younglings of other birds.

What Do Great Horned Owls Eat In Captivity?

Great horned owls (Bubo virginianus) are large birds of prey with two distinctive plumage features: the feather tufts on their heads, known as “plumicorns,” and their large yellow eyes.

Captive great horned owls live longer and remain healthier than their wild counterparts. This is mostly due to the care and attention they receive.

Their diet in captivity primarily consists of whole small mammals such as mice, rats, and chicks. They are also fed prepared food with vitamins and minerals added to it to ensure that they receive all the nutrients they need to maintain their good health.

Great horned owls are born with their eyes closed, but they begin to open after about a week. Hence, they rely on their parents.

At the beginning of their lives, baby owls eat regurgitated food, as they can’t swallow whole pieces of meat. As they grow older, they’ll eat small pieces of meat, and later move on to whole prey.

Their diet consists of the same animals their parents eat: mammals, birds, insects, and fish.

When they’re first born, their mother brings them food that she has caught and then watches as the young owls tear up the meat with their beaks.

How Much Do Great Horned Owls Eat?

Great horned owls are known to eat a lot. How much they eat depends on the time of year and the type of prey that is available. They can more than 1/3 their body weight in a single meal.

Birds of prey don’t get to eat every day. Sometimes, they can go up to ten days without food. When they eat regularly, they’ll typically eat 5-10% of their body weight.

This all comes down to the time of year, and the availability of prey animals.

Carnivores are animals that eat other animals[4]. All birds of prey are carnivores, including the great horned owl.

They’re not always the predator though. Great horned owls are also sometimes the prey of other carnivores including bobcats and some birds of prey.

How Do Great Horned Owls Hunt?

One of the most interesting things about great horned owls is their hunting behavior. Their hunting strategy is both terrifying and fascinating. They use a number of tools to catch prey:

Great horned owls have some very important adaptations that allow them to catch food in low light or during the night. They have large, forward-facing eyes to provide binocular vision which they use to orient themselves during flight.

They are nocturnal hunters, taking advantage of their excellent night vision to stalk prey in the dark. They also rely heavily on stealth. Given their patience, they often make use of an ambush method, in which they perch above prey and wait for the opportune moment to strike.

Their feathers are adapted to silent flight. They can sneak up on prey without being heard or creating turbulence in the air.

These owls also have incredibly strong feet with sharp talons that are adapted for catching and killing prey. Along with their feet, they also use their sharp beak.

Once they spot their prey, they quickly swoop down from their perch with astonishing speed.

In conclusion, great horned owls are predators that eat small and medium-sized animals. They have excellent eyesight and hearing, which helps them hunt prey at night.