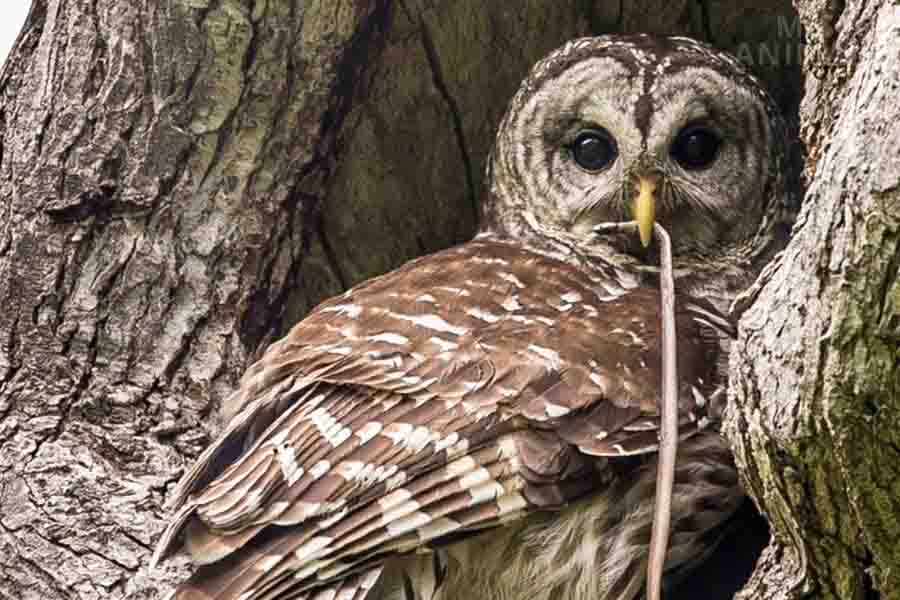 Yes, owls do eat snakes. Some owls do so frequently, as snakes are relatively easy to catch. While they don’t actively seek for them, they won’t pass on an opportunity for an easy meal. There are four main owls species that eat snakes: Barred owl, Screech owl, Burrowing owl, and great horned owl.

Owls fascinate many people. They are known for their distinctive features, including their large eyes and ears, as well as their ability to rotate their heads 270 degrees.

What many people don’t know about owls, however, is that they are also skilled hunters. And, they’re not particularly picky when choosing prey.

In this article, we will take a look at how owls hunt snakes – and whether or not they actually eat them.

Some owls frequently eat snakes, such as the Great Horned owl. They don’t actively seek for them, but they do hunt them if the opportunity presents itself. Other owls don’t eat snakes, simply because they never encounter them.

While they do eat snakes, they do not actively hunt them. They also tend to stay away from dangerous snakes, as these can result in the death of the owl itself[1].

As owls are nocturnal, meaning they hunt at night. Owls commonly hunt nocturnal snakes, as these will show themselves by moving around.

The owl’s digestive system is weak, hence they only eat soft-tissue prey (of the soft-tissue parts of prey). They tear off pieces of the flesh using their beak or rip through the prey’s skin using their hooked bill to get at the flesh.

What Snakes Do Owls Eat?

While owls don’t necessarily have a preference when it comes to what snakes to eat, the very way of nature nudges them toward some species more than others.

Owls eat a variety of snakes. The most common include:

Let’s take a closer look at these species.

The common garter snake, Thamnophis sirtalis, is one of the most widespread snakes in North America and can be found in areas from Canada down to Florida.[2]

They don’t live in deserts or high mountains but tend to congregate with other garter snakes near water. They prey on fish, amphibians, worms, and leeches.

In many cases, owls do eat common garter snakes if they can catch them. Smaller owls have trouble with this, as do those who don’t have the proper claws to grab and hold a full-grown garter snake.

The owl’s diet consists largely of rodents, such as rats. They do eat other types of animals but mostly small mammals (rats, mice, etc.). Since they don’t have teeth, owls swallow their prey in small pieces. As for snakes, this part is easier.

The rat snake is known to be an anti-coagulant which makes it easier for the owl to swallow.

Ribbon Snakes are an extremely common food source for Great Horned Owls[3]. They don’t fight back, but rather try to escape from predators by slithering through the grasses of open fields, thus often exposing their entire length along the ground to the owl.

The ribbon snake has a defensive mechanism that it exposes when threatened; the underside of its tail is bright yellow, and it can be turned inside out to display this bright coloration in an attempt to startle predators.

How Do Owls Hunt Snakes?

Owls use their highly developed sense of hearing to find and capture snakes[4]. Owls grab snakes by their body, crushing them with their sharp talons.

Owls are incredibly skilled hunters. Via sound detection and night vision, they’re able to find animals that are hidden in the darkness of the night.

Their feet are very strong, which is why owls primarily use these to choke their prey, even breaking their necks occasionally.

What Type of Owls Eat Snakes?

The most common owls that eat snakes are Great Horned owls, Screech owls, Barred owls, and Burrowing owls. Different species of owls have different diets and some do include snakes as part of their diet.

Snake-eating owls include the following:

Each of these owls target different snakes. This largely depends on the size of the owl, as the size of prey directly correlates to this.

What Do Owls Typically Eat?

Owls eat a variety of animals, including rodents, birds, insects, reptiles, and more. As long as the prey is small enough to be hunted, owls will eat it.

While snakes don’t make up a major part of most owls’ diet, they do eat snakes. Some owls are more frequent snake hunters than others, including Great Horned owls and Barred owls.

Other than snakes, owls also eat rodents, birds, insects, and many other animals.

Yes, owls do eat copperheads. Most owls only prey upon nonvenomous snakes but this has something to do with them not wanting to be harmed. Venomous snakes don’t affect owls when eaten.

Are Owls Afraid of Snakes?

While some owls will eat snakes, their relationship is purely one of predator and prey. The owl has nothing to fear from the snake.