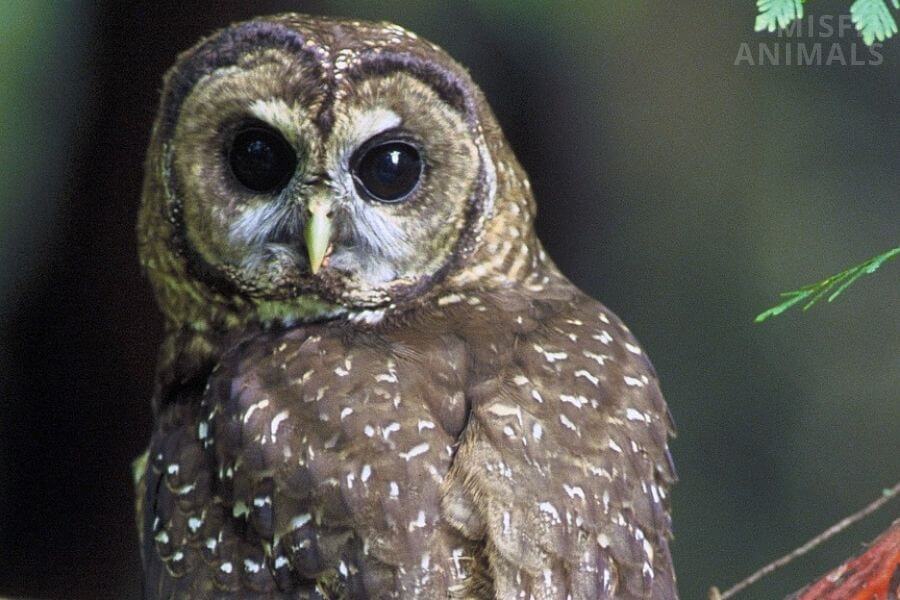 The Spotted Owl (Strix occidentalis) is found in North America and can be identified by its dark brown feathers with white spots. It is a species of true owl and is typically found in old forests.

This owl is found between British Columbia to Mexico, where it feeds on small mammals. There are few left (only 15,000 mature individuals), as this species is categorized as near-threatened.

One of the most interesting and unique birds rarely seen is the spotted owl. These birds are not often seen by bird enthusiasts or bird watchers, but they are definitely worth seeking out if you have the opportunity.

The spotted owl is rare in the wild. With its unique marking, there’s no mistaking a spotted owl when you see one. Here are a few other facts that you might want to know about these beautiful birds.

The spotted owl is a native bird of North America and has been present on the continent for millions of years[2]. The spotted owl is specifically adapted to live in old-growth coniferous forests. These forests are characterized by a high density of trees, a large canopy, and a thick layer of duff on the ground.

The Spotted Owl is a medium-sized owl that is found in North America. They have brown and white plumage, and their eyes are blackish brown.

They look familiar to the barred own but can be distinguished by their smaller size and less gray colors.

The Spotted Owl is well adapted to life in dense forests and can be found in a variety of habitats, including old-growth forests, young-growth forests, and riparian zones.

These criteria of old-growth forests limit their habitat, which makes deforestation a severe threat to their continued survival.

They spend most of their time hunting. They don’t build their own nests, but instead make use of cavities in trees or abandoned nests from raptors and squirrels.

As with most owls, spotted owls are nocturnal, hunting by night and sleeping by day.

The Spotted Owl is a nocturnal raptor that feeds primarily on small mammals, such as rodents. They will also eat birds, reptiles, and insects.

Owls have very sharp talons that they use to catch their prey. They also have a sharp beak that is used for tearing meat. Spotted Owls usually hunt by perching in a tree and watching for prey below. They can also fly low over the ground to catch prey.

Owls have a very good sense of smell which helps them find prey. They also have very good hearing which allows them to hear prey moving in the dark.

The most common prey animals of spotted owls include small mammals such as rodents, birds, and reptiles.[4]

Predation and habitat loss are major threats to the spotted owl. They are preyed on by hawks, eagles, and other predators. They are also susceptible to disease and parasites.

The owls depend on old-growth forests for their habitat, and these forests are being cleared at an alarming rate. In the Pacific Northwest, for example, the spotted owl’s habitat has decreased by nearly 60% in the last two decades. This has resulted in the spotted owl being categorized as near-threatened by the IUCN Red List.

Predation is also a major threat to the spotted owl. Owls are preyed on by hawks, eagles, and other predators. They are also susceptible to disease and parasites.

Spotted Owls breed once a year, and the female typically lays two eggs. The eggs hatch about 30 days after they are laid, and the young owls stay in the nest for about 10 weeks.

After leaving the nest, the young owls will stay with their parents for a few more months before becoming fully independent.

Spotted Owls can live up to 20 years in the wild, and up to 25 years in captivity, if they receive proper care. The average life expectancy is much lower, as many owls are killed by predators.

The northern spotted owl is a threatened species in the United States. While there are many factors that have contributed to this decline, the main threat to the spotted owl is habitat loss.

Logging and deforestation have drastically reduced the amount of old-growth forest that the owls rely on for habitat. In addition, the owls are also threatened by climate change, disease, and predation.

There are several organizations that are working to protect the spotted owl population. The U.S. Fish and Wildlife Service has created a recovery plan for the owl, and many conservation groups are working to promote sustainable forestry practices.

It is important to protect the spotted owl population, not only because they are an endangered species, but also because they play an important role in the ecosystem. These owls help to control populations of rodents and other small animals, and their loss could have serious consequences for the health of the forest.

Spotted owls are very protective of their territory. If you see a spotted owl, it is important to give it plenty of space and not to approach it too closely. It is also important to never harass or disturb an owl, as this can make them quite angry and aggressive.

How many spotted owls are there left?

There are approximately 15,000 mature individuals. The spotted owl was once a common sight in the Pacific Northwest, but their populations have declined significantly in recent years due to loss of habitat.