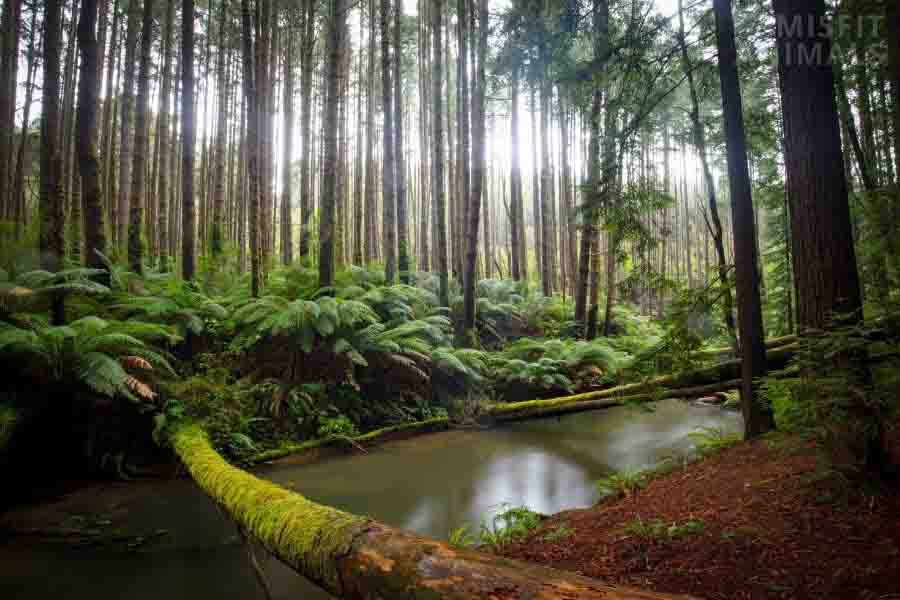 Have you ever gone for a walk in the forest and wondered what kind of animals you were seeing? This guide will provide a comprehensive overview of the most common types of animals that can be found in a forest habitat.

From raccoons to deer, we’ll cover them all! So whether you’re an experienced nature-lover or just starting, read on for some essential information about forest animals.

There are more than 6,700 species of animals in the forest. Each of these animals has a different way of utilizing the dynamic of the forest to survive.

Deer are the most popular and well-known forest animals. Though often thought of as timid creatures, deer can be very aggressive, especially during the rutting season. They are often hunted by the predators of the forest.

Male deer (bucks) will fight each other for the chance to mate with a female deer (doe)[1]. Bucks will also spar with their antlers to show dominance over other bucks.

Deer are browsers, which means they eat leaves, twigs, and other plants. They also eat acorns and nuts. In the winter, when food is scarce, deer will eat bark from trees.

Bears are large, hairy mammals that live in forests all over the world. There are eight different species of bear, including the polar bear, grizzly bear, and black bear. Bears are excellent climbers and swimmers, and they use these skills to find food and escape from predators.

These large animals are omnivores (except for the polar bear and panda bear), which means they eat both plants and animals. Their diet varies depending on the season and what is available.

In the spring and summer, bears eat a lot of berries, nuts, and insects. In the fall, they eat acorns and other fruits to fatten up for winter. During winter, when food is scarce, bears mostly eat plants.

Wolves are one of the fiercest predators of the forest. They have evolved into effective hunters due to their pack system. They often hunt small animals alone but prefer to hunt for large ungulates (deer, elk, and moose) with the pack.

Due to their pack structure, wolves are very social animals. They have many unique interactions with their pack.

The pack is led by the “alpha” male and female. This is the breeding pair. Next up is the beta wolf, who is second in command. Then there is the rest of the pack, and finally the bottom-feeder: the omega wolf.

Boars, also called wild pigs, are found in woods throughout the world. In North America, they range from Alaska and Canada to Mexico and Central America.

These are bulky animals with short legs, small eyes, and large heads with tusks. Tusks are long canine teeth that grow up and out from the boar’s mouth.

Boars are omnivores, which means that they eat both plants and animals. Their diet includes acorns, roots, fruits, insects, small mammals, and carrion (dead animals). They use their powerful noses to dig for food in the ground.

Cougars, also known as mountain lions or pumas, are large felines that are endemic to the Americas.

These cats are some of the most familiar and popular animals in North America, and their populations extend from Canada all the way down to South America[2]. Cougars are an important part of the continent’s ecosystem, and play a vital role in controlling prey populations.

Cougars are typically solitary animals. Adults only couple up to mate. Females typically have a litter of two to three cubs, which they will raise for up to two years before the young cougars strike out on their own.

Adults can grow to be up to eight feet long and weigh over 200 pounds, making them one of the largest felines in North America.

Elk are the largest member of the deer family in North America, and they are one of the most popular animals to hunt. They are found in woods and forests across the United States and Canada.

There are two species of elk:

The Rocky Mountain elk is the most common, and it is the kind that most people think of when they think of elk. Roosevelt elk are found on the west coast of North America, and they are the largest species of elk.

Foxes are small and medium-sized canids native to much of the Northern Hemisphere. They have large pointy ears, long legs, and bushy tails. Most foxes are nocturnal animals that hunt alone.

These sly animals are incredibly resourceful and intelligent animals. They are known to be able to solve complex problems and adapt to new environments quickly. Foxes are also very playful animals, often engaging in play fighting with each other.

Foxes have a varied diet that includes rodents, rabbits, birds, reptiles, and invertebrates. In some areas, foxes may also eat fruit and vegetables.

Hares are found throughout the world, in Europe, Asia, and North America. The European hare is the largest species; it can grow to be two feet long and weigh up to eleven pounds.

They are members of the family Leporidae, which also includes rabbits. like rabbits, they have long ears and short tails.

You can recognize a hare by its longer legs compared to rabbits. They can run up to 35 miles per hour, making them very difficult to catch[3]. Hares are also generally more solitary than rabbits, although they will sometimes live in pairs or small groups.

Lynxes are shy, forest-dwelling animals that are members of the cat family. There are four species of lynx, all of which are relatively medium-sized cats.

The smallest species is the bobcat, which can be found in North America. The largest species is the Eurasian lynx, which inhabits Europe and Asia. Lynxes are known for their tufted ears and long hind legs, which give them a distinctive appearance.

Lynxes are solitary animals, and they generally only come together to mate. Females give birth to litters of two to four kittens, which they raise on their own. Lynxes typically live for 10-12 years in the wild, though some individuals have been known to live for up to 20 years.

Birds are the most familiar of all animals, and probably the best known to people around the world. There are about 10,000 species of birds alive today. They are adapted to almost every kind of habitat on Earth, from tropical rain forests to arctic tundras.

Birds have always been a popular subject for artists and bird watching is a popular pastime. The study of birds, known as ornithology, can be both a recreational and serious pursuit.

Most birds are able to fly. This means that they have feathers, which are covered with a special kind of scales. Birds also have wings, which are attached to their bodies by joints. The shape of the wing helps the bird to fly.

Moose are large, forest-dwelling animals that are found in North America, Europe, and Asia. They are the largest member of the deer family and can weigh up to 1,800 pounds.

Moose are herbivores, and their diet consists mostly of leaves, twigs, and bark. In the winter months, moose will also eat moss and lichens.

These large animals are solitary animals and only come together to mate. The mating season for moose is in the fall, and after a gestation period of around eight months, calves are born in the spring.

Moose calves weigh around 30 pounds at birth and are able to walk within an hour. Moose live around 20 years in the wild.

Raccoons are small, nocturnal mammals that are found in North and South America. The name “raccoon” is derived from the Algonquian word meaning “one who rubs, scrubs, or peels”. Raccoons are interesting animals because they are very intelligent and have opposable thumbs on their front paws, which allows them to grasp and hold onto things.

They are known for their black masks and their bushy tails with rings of color. Adult raccoons usually weigh between 8 and 20 pounds but can weigh up to 35 pounds. Females are usually smaller than males. Raccoons can live up to 20 years in the wild, but only live an average of 2 to 3 years in captivity.

Raccoons are omnivores, which means that they eat both plants and animals. Some of the things that raccoons eat include fruits, nuts, insects, small mammals, birds, and eggs. They do also eat garbage and pet food if it is available to them.

Reindeer are a type of deer found in cold, northern parts of Europe, Asia, and North America. These animals are also known as caribou in North America. Reindeer have been domesticated by humans and are raised for their meat, milk, and antlers.

Reindeer are well-suited to life in the cold Arctic regions. They have thick fur coats that keep them warm in the winter months. Their hooves are also adapted for walking on snow and ice. Even though they have hooves, they are very good swimmers.

During the summer months, reindeer graze on a variety of plants. This includes mosses, herbs, lichens, and shrubs. In the winter, they eat woody plants such as willow and birch trees.

Skunks are small, black and white creatures that are known for their sharp smell.

Skunks are nocturnal animals, which means they are most active at night. During the day, skunks sleep in their dens. They live in solitude and usually only come together to mate.

This animal is known for its defense mechanism, a pungent, smelly liquid. They use this liquid to defend themselves from predators. When a skunk feels threatened, it will turn its back to its attacker and spray the liquid. The smell of the skunk’s spray can be very strong and can last for days.

Squirrels are small to medium-sized rodents of the family Sciuridae. The squirrel family includes tree squirrels, ground squirrels, chipmunks, marmots (including woodchucks), flying squirrels, and prairie dogs amongst other rodents.

This rodent is indigenous to the Americas, Eurasia, and Africa, and has been introduced to Australia. The earliest known squirrels date from the Eocene period and among other living rodent families, they are most closely related to the marmot family.

Squirrels are typically small animals with large eyes and furry tails. Their fur is soft and silky, although much thicker in some species than others. The coat of a few species of squirrel, such as the giant panda, is thicker and fluffier than that of most mammals.

How Many Animals Live In Forests?

It is estimated that there are approximately 6,700 animal species that live in forests. This number includes both vertebrate and invertebrate species. Of the 6,700 forest animal species, 606 are mammals, 1,248 are birds, 410 are reptiles, 427 are amphibians, and 3,009 are insects.

What Lives in the Forest Floors?

If you’ve ever taken a walk through the woods, you’ve probably noticed that the forest floor is teeming with life. From insects to reptiles, amphibians, small mammals, and birds, there is an incredible amount of biodiversity to be found right at our feet.