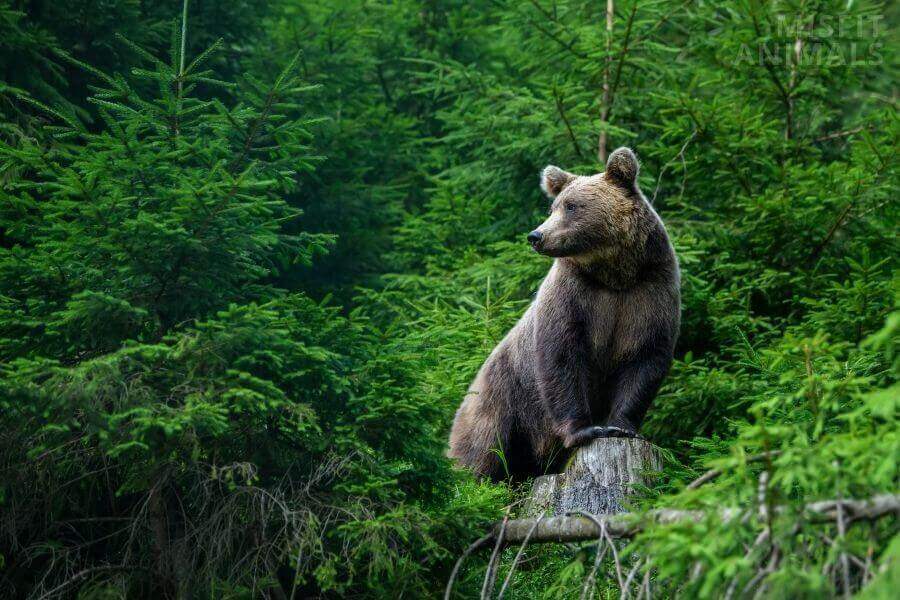 Temperate forests are some of the most diverse habitats in the world, stretching over multiple climates.

They are full of towering trees with intricate bark, a carpet of green underfoot, and a symphony of bird songs in the air.

In this list, we’ll cover 9 common and interesting animals that live in temperate forests, and give you a full overview of animals found there.

Temperate forests are found in locations around the world, including North America, Europe, and Asia. These forests are characterized by having four distinct seasons – winter, spring, summer, and fall.

Due to the changing seasons, the animals that live in temperate forests must be able to adapt to different conditions throughout the year.

Black bears are one of the most popular animals in North America. They live in forests and are often seen as a symbol of wilderness. Though they are not considered to be true hibernators, black bears do den up during the winter months when food is scarce.

As omnivores, black bears eat just about anything. In the spring and summer, their diet consists of plants and berries[1]. In the fall, they fatten up on acorns and other nuts in preparation for winter. And in the winter, when food is scarce, they eat anything they can find, including small animals.

Despite their massive size, black bears are excellent climbers. They often climb trees in search of food or to escape predators.

Black bears both hibernate and migrate. Before hibernating, they migrate south in search of food. They then den up during the winter months when food is scarce. During this time, their heart rate and body temperature will drop slightly and they will not eat or drink. Black bears typically emerge from their dens in early spring.

The anole is a small, shy creature that is found in the tropical forests of South and Central America. In spite of its retiring nature, the anole is one of the most popular lizards among reptile enthusiasts. This is largely due to the fact that anoles are very easy to care for and make excellent pets.

There are more than 400 species of anole, and they come in a wide variety of colors and patterns. The most common pet anoles are the green anole (Anolis carolinensis) and the brown anole (Anolis sagrei).

Anoles are insectivores, and their diet consists primarily of ants, crickets, and other small insects[2]. In the wild, anoles spend most of their time in trees and bushes, where they hunt for food and avoid predators.

Skunks are small mammals in the family Mephitidae. The 16 species of skunks are found throughout North and South America, with 15 of those residing in the United States. Skunks are known for their ability to spray a foul-smelling liquid as a form of self-defence.

Skunks generally have black fur with white stripes running down their backs. The pattern and placement of the stripes vary depending on the species.

They are relatively small animals, with the largest species reaching only about 32 inches in length and weighing up to 14 pounds.

While skunks are often thought of as pests, they do play an important role in the ecosystem. Skunks help control the population of rodents and other small animals. They also help spread the seeds of plants and fruits.

Barbets are temperate forest animals that are known for their brightly colored plumage. They are found in North America, Europe, and Asia.

A Barbet is small to medium-sized bird with short legs and a stout body. The bill is usually heavy and serrated, and the wings are rounded. The tail is often long and square-tipped. The plumage of Barbets is usually brightly colored, with green, yellow, red, and blue being the most common colors.

They are insectivorous, although they also eat fruits and berries[3]. They use their strong bills to break open the hard exteriors of their prey. As vocal birds, their calls can be heard throughout the Temperate Forest.

Barbets are active during the day, and they typically roost in trees at night. They build their nests in tree cavities, and they lay 2-6 eggs per clutch. They are not migratory birds and typically remain in the same area year-round.

Hares are among the most common and widespread of all mammals. They can be found in nearly every habitat across the globe, from cold tundra to hot deserts. In North America, they are particularly abundant in the temperate forest regions.

There are two main types of hares:

Cottontails are smaller, with shorter ears and tails. They are also generally brown or gray in color, with white undersides. Jackrabbits, on the other hand, are larger animals with longer ears and legs. They are typically brown or white in color.

Hares are well-known for their high reproductive rates. A single female can produce up to eight litters of young per year. This, combined with their ability to live in a wide variety of habitats, has allowed hares to prosper in many parts of the world.

While they are not typically considered pests, hares can cause significant damage to crops and gardens. Their high reproductive rates make them difficult to control, and they are often considered a nuisance by farmers and gardeners.

Boa constrictor, found in temperate forest ecosystems, is a large, non-venomous constrictor snake. They are beautiful creatures that can grow quite large, up to 12 feet (3.7 m) long or more!

Boa constrictors typically live around 20 years in the wild, but captive specimens have been known to exceed 30 years old. These snakes are not only long-lived but also have the ability to withstand a fair amount of abuse and still thrive.

Boa constrictors are found in a wide variety of habitats throughout their large range, from tropical rain forests to more arid desert regions. They are even known to occur in human-altered habitats, such as farms and urban areas.

They are generalist predators, meaning they do not specialize in preying on any one type of animal. Their diet consists of a wide variety of small to medium-sized mammals, birds, and reptiles.

Beavers are herbivores, which means that they eat plants. Their diet consists mostly of aquatic plants, such as cattails and water lilies. Beavers also eat tree bark and twigs.

These rodents are social animals and live in families. The family unit is typically made up of a mother, father, and their offspring. However, some beaver families can be much larger.

Beavers are active during the day and night, but they are most active at night. During the day, beavers will usually stay in their lodges or dams.

Bison are temperate forest animals that live in North America. They are the largest land mammal in North America and can weigh up to 2,200 pounds. Bison are herbivores and eat grasses, leaves, and other plants. They are preyed upon by wolves, bears, and humans.

Bison once roamed across North America in huge herds, but they were nearly hunted to extinction in the 1800s. Today, there are about 500,000 bison in North America, most of them on ranches where they are raised for their meat.

A small number of bison live in national parks and other protected areas.

These large animals are important to the ecosystem because they help keep the grasslands healthy. They do this by grazing on plants, which helps control the growth of invasive species.

Bison also help spread grass seeds as they travel across the landscape.

Squirrels are one of the most common animals in the Temperate Forest. They are small, agile, and very intelligent creatures that are known for their playful antics. There are many different species of squirrels that can be found in Temperate Forests all over the world.

Squirrels are excellent climbers and can often be seen scrambling up trees or leaping from branch to branch. They are also very good swimmers and have been known to take over abandoned bird nests.

As they are mostly herbivores, they primarily feed on plants. They do occasionally eat small insects or eggs.

The most common Temperate Forest squirrel is the red squirrel. These little creatures are reddish-brown in color and have bushy tails. They are very active and are always on the lookout for food. Red squirrels are also known to be quite territorial and will often chase away other animals from their area.

Are There Monkeys In Temporal Forests?

Yes, there are monkeys in some temporal forests. The wildlife found in Temporal Forests varies depending on the location. There are some animals, like golden snub-nosed monkeys, that are found in temperate forests around the world.

What Insects Live In Temperate Forests?

Temperate forests are home to a variety of insects, including ants, flies, mosquitoes, praying mantis, dragonflies, and butterflies. These insects play an important role in the ecosystem by providing food for other animals and helping to recycle nutrients back into the soil. Many of these insects are also important pollinators of plants.