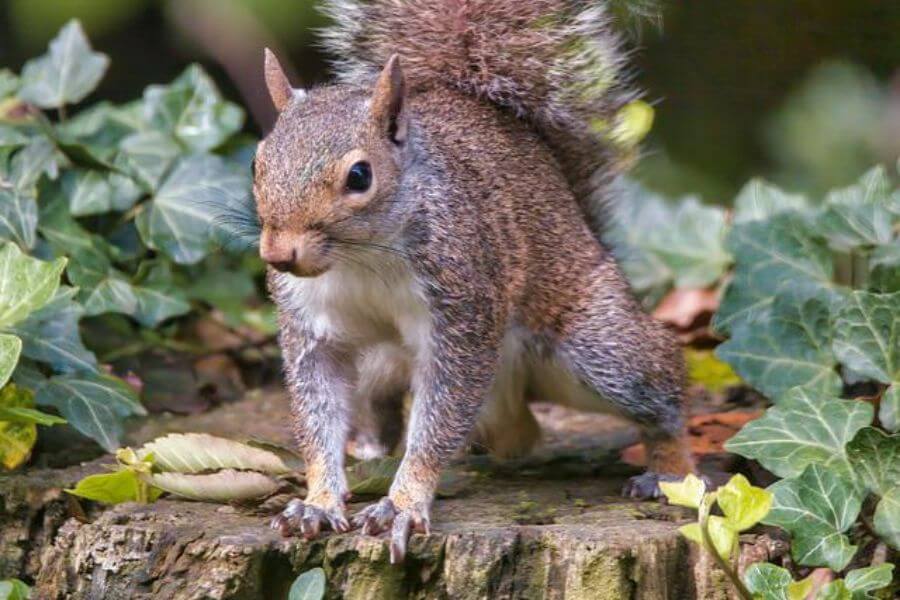 There are more than 200 species of squirrels in the world.

These small to medium-sized rodents are divided into three main types of squirrels:

Squirrels are indigenous to the Americas, Eurasia, and Africa. They live on every continent except Australia and Antarctica. [1]

Their almond eyes and fluffy tails have endured them to many people. With 200 species of squirrels in the world, there is so much to learn about these sweet-looking mammals.

To start with, let’s look at nine types of squirrels native to North America, how to identify them and what they eat.

Types of Squirrels In North America

There are three main categories of a squirrel in North America: tree squirrels, ground squirrels, and flying squirrels.

Here are the most common types of squirrels in North America:

Tree squirrels live in or among trees. There are more than 100 types of tree squirrels. Eastern gray squirrel, American Red Squirrel, and the American fox squirrel are native to North America.

The Eastern gray squirrel (Sciurus carolinensis) is native to eastern North America. These squirrels live among tree canopies from the west of the Mississippi River to the north of Canada.

They prefer mature continuous woodlands of more than 40 hectares[2]. They have made homes of suburbs and city parks. If you visit New York and see a squirrel in one of the parks, it’s an Eastern gray squirrel.[3]

This squirrel was exported to other parts world, including parts of Britain, Ireland, and Italy.

Eastern gray squirrels have pale grey to dark grey fur, a white underbelly, and white flecks in their bushy grey tails. There is no difference in size and color between males and females.

What Do Eastern Gray Squirrels Eat?

Eastern gray squirrels are omnivores and mainly feed on:

They thrive in forests with oak, walnuts, and pine trees. These trees produce foods that squirrels store through winter.

American Red squirrels (Tamiasciurus hudsonicus) live across North America in coniferous forests. They also live in suburban and urban settings where there is an interlocking coniferous tree canopy. [5]

The American red squirrel has a reddish coat, a white underside, white rings around the eyes, and tufted ears in the winter.

What Do American Red Squirrels Eat?

Red squirrels are primarily herbivores. They eat the following:

Their fur coats are brow-gray to brown-yellow in color with an orangish-brown underside. In the eastern regions, they can have darker brown to black fur with white bands on the face and tail. [7]

What Do Fox Squirrels Eat?

Fox squirrels are omnivores. They eat the following:

Ground squirrels live in barrows in the ground. They have a unique ability to rise on their hind legs and stand for long periods. They are social creatures and live in colonies. Ground squirrels in North America include Chipmunks, Alaska marmots, Olympic marmots, and prairie dogs.

Chipmunks are described as striped pygmy squirrels. They are found in various types of forests from southern Canada to west-central Mexico.[9]

These small omnivores are known for stuffy food in their mouths until their cheeks puff out. Chipmunks’ large internal cheek pouches allow them to do this.

Chipmunks are known as striped squirrels because of their distinguishing dark brown and white stripes on their backs. They also have white stripes lining their eyes, a white underbelly, and a furry tail.

What Do Chipmunks Eat?

Chipmunks are omnivores and eat the following:

Alaska marmots (Marmota broweri) live in colonies along the Brooks Range, Alaska. They eat grass, seeds, and lichen found along the rocky mountainsides.

Marmots are the heaviest member of the squirrel family and can weigh anything from 4.5 pounds (2 kilograms) to (24lb) 11 kilograms.

What Do Alaska Marmots Eat?

The Olympic marmot (Marmota olympus) is found in the Olympic National Park on the Olympic Peninsula in the state of Washington.[11]

Olympic marmots weigh up to 24.3 pounds (11 kilograms). They have small eyes and eyes, bushy tails, and their stocky bodies are supported by strong, short legs. They measure between 26 to 30 inches (67 to 75 centimeters) in length.

The Olympic marmot has an interesting coat of fur.

Their fur has two layers: a soft, thick underfur and a courser outer layer of fur.

Their coats also change color with the seasons and with age. While the marmot’s muzzle and rings around its eyes stay white, its brown fur coat darkens until it molts in June. This molt is followed by the forming of two black patches of fur on the back of the shoulders. By the time it is fall (autumn), the marmot’s coat is almost completely black.

After winter hibernation, Olympic marmots emerge with a yellowish-tan coat.

What Do Olympic Marmots Eat?

Olympic Marmots are folivorous, which means they eat leaves. They eat the following:

Prairie dogs (genus Cynomys) are burrowing species of ground squirrels. They live in the grasslands of North America. They were given the name prairie dogs because of where they live and their barking warning call.

There are five species of prairie dogs:

The Black-tailed prairie dog is the most common species. [12]

The International Union for the Conservation of Nature (IUCN) has listed the Utah prairie dog and Mexican prairie dog as endangered in their Red List of Threatened Species. [13]

What Do Prairie Dogs Eat?

There are about 50 species of flying squirrels in total.

Southern Flying Squirrels (Glaucomys volans) live in woodlands and forests in the eastern half of the United States, southeastern Canada, Mexico, and Honduras.

Southern flying squirrels are gray-brown with a white underside. They have a flap of loose skin extending from the wrist to the ankle that helps them glide.

Northern flying squirrels (Glaucomys sabrinus) live in forests across Canada, and south to the mountains of North Carolina and west to Utah in the United States.

Northern flying squirrels look similar to South Flying squirrels, but instead of a white underside, they have gray fur covering their bellies.

What Do Fly Squirrels Eat?

Flying squirrels are omnivores and mostly feed on the following:

What Kind of Squirrel Species Live in New York?

Eastern gray squirrels are the type of squirrel found in New York City Parks. They can range in color from pale grey to dark grey and black.

How Many Types of Squirrels Are There?

There are more than 200 species of squirrels in the world divided into three types: tree squirrels, ground squirrels, and flying squirrels.