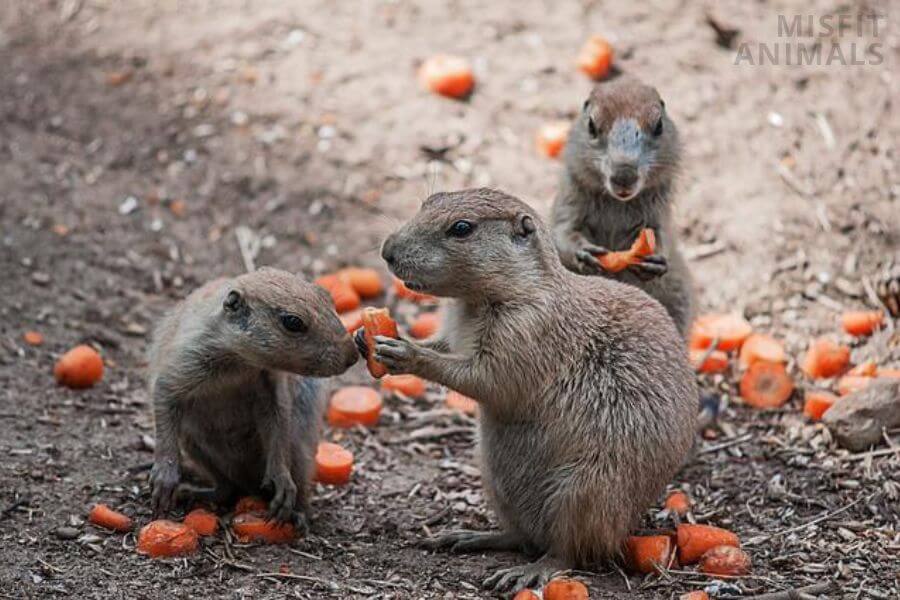 Many squirrels are social animals, living in small groups. There are mostly ground squirrels, as tree squirrels keep more to themselves.

They have several unique social interactions, such as their show of dominance, rituals, and playtime.

In the following article, we explore how squirrels communicate with each other, function as groups, and live together.

What Is a Group of Squirrels Called?

A group of squirrels is called a scurry.

There are an estimated 279 species of squirrels that are either tree squirrels, flying squirrels, or ground squirrels.[1]

While they are all squirrels, they behave differently.

Common tree squirrels in North America include Eastern gray squirrels, American red squirrels, and fox squirrels. They nest in trees and are diurnal.

Some squirrels live alone while others nest with others nest in a group, also known as a scurry.[2]

Do Squirrels Live in Groups?

Squirrels keep us guessing as they sometimes live alone and sometimes nest with others. This largely depends on the type of squirrel, but there are still differences from species to species.

There are no hard and fast rules, but here is the general consensus:

However, it does depend on the situation.

Nocturnal flying squirrels are more mysterious than tree and ground squirrels. Scientists don’t know as much about them as they do about tree squirrels.

This is largely due to the high level of difficulty studying them, as they keep away from humans.

What we do know is that they do nest together.[1]

Southern flying squirrels nest on their own or as a family in the summer. When winter comes around, they share communal nests.

Northern flying squirrels sometimes share a communal nest with up to eight other squirrels.[6]

Ground squirrels are considered social animals. They play with and groom each other. The male squirrels also help care for their young.[1]

California ground squirrels are interesting as they can live in 35 feet of networked burrows with many ground squirrels. Some individuals nest in a burrow alone while others burrow in a group.[7]

Related: How and Where Do Squirrels Sleep? (Squirrel Sleeping Habits)

The Family Life of Tree Squirrels

Although tree squirrels are known to be loners, they are born into a family. Tree squirrels spend the first few weeks of their lives in relationship with their mother and siblings.

Baby squirrels, also known as kittens, kits, or pups, are born blind and helpless. They open their eyes when they are four weeks old.

As they grow, squirrel kittens start to play with their siblings. At about eight weeks old, kittens play fight with each in the nest. They stay in the nest for six weeks before venturing outside.[9]

Squirrel kittens stay in the nest full time for the first 42 to 49 days. After this, they start to venture out and return to the nest.

The mother weans them when they are between 56 and 70 days old. Once weaned, the young squirrels leave the nest and venture out on their own.[10]

Are Family Ties Binding After They Leave the Nest?

It’s thought that American red tree squirrels are asocial, but research from the University of Guelph found that females will take in orphaned squirrel infants if they are relatives. [11]

The researchers found an older and larger squirrel kitten in a litter. Collected DNA found that the larger infant was adopted by an older sister.[12]

This means that squirrels can identify relatives and are capable of altruism.

How Squirrels Communicate With Other Squirrels

If you watch squirrels, you’ll notice that they make a lot of noise and flick their tails often. This is how squirrels communicate with each other, and with predators.

Squirrels use sophisticated multisensory or ‘multimodal’ methods of communication[13]. They communicate in the following ways:

Male squirrels vocalize to attract a mate during mating season. Infant squirrels chirp or yelp to call their mothers and most squirrels quill sound alarm calls to warn other squirrels of predators.

Tree squirrels have different vocal alarms to warn others of a predator nearby.

Squirrels also use tail signals in combination with their vocalizations. This includes a twitch of the tail, a small controlled movement, and tail flagging (the tail is whipped up and down or swished around in circles or figure eights).[15]

Why Do Squirrels Chase Each Other?

Squirrels chase each other for fun when they are young when pursuing a mate during mating season or to show dominance over a territory.

There are three reasons for squirrels to chase each other:

Territorial squirrels like American red squirrels can chase other squirrels to maintain dominance over their territory.

Eastern gray squirrels and fox squirrels are not territorial, but do form dominance hierarchies and can chase each other to maintain this order.

In the mating season, which starts late in winter and early spring, male squirrels chase females.

Young squirrels chase each other for fun. Along with chasing, they also play fight with each other. This helps them build strength, endurance, and coordination, which will help them evade predators throughout their lives.[16]

Squirrels live in groups or alone, depending on the species. Certain types of squirrels show a preference for living alone, like tree squirrels, while flying squirrels and ground squirrels tolerate living in colonies.