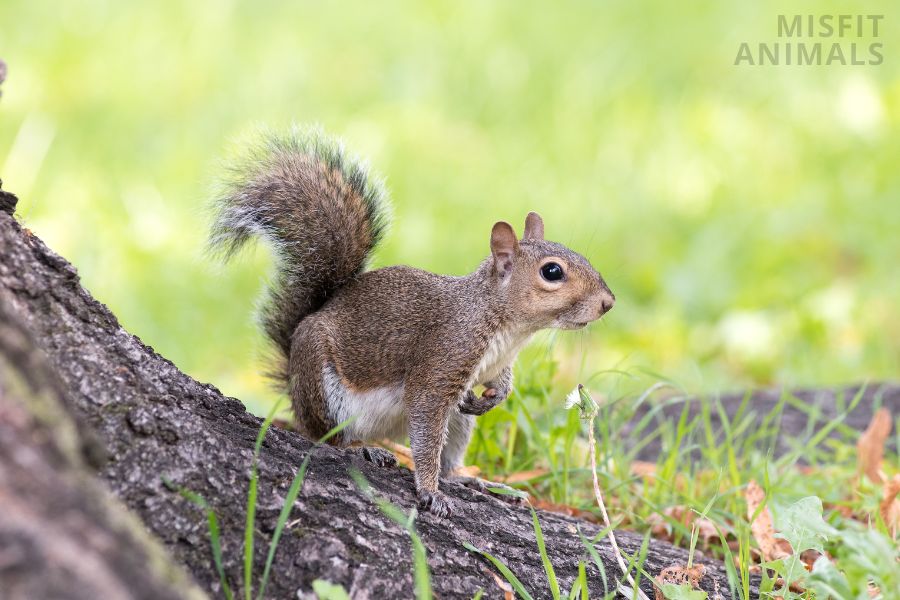 If you watch squirrels in a park, you’ll notice they flick and twitch their tails regularly.

Is it a nervous twitch is the more to a squirrel’s twitching tail?

In this article, we look at a few reasons why squirrels flick their tails and how squirrels use their tails to their best advantage.

5 Reasons Why Squirrels Flick Their Tails

Squirrels mostly flick their tails to express emotions and communicate with other squirrels and predators.

As all animals, squirrels need to communicate. They do so with sounds, body language, and tail twitches.

1. Warn Other Squirrels of Nearby Predators

Squirrels to flick their tails along with making vocalizations to alert other squirrels of predators nearby.

A study by the University of Miami found Eastern gray squirrels use three vocal alarm calls and two types of tail signals to warn other nearby squirrels of predators.

These signals are often used in combination.

The first tail signal is a twitch. It is a small controlled movement that looks like a wave running through the tail.

The second one is a flag accompanied by a whipping motion. The tails whip around in a circle or in figure eight motions.

They use different vocalizations and tail signals to warn of predators and they use them in specific combinations to indicate different types of predators.

The three vocal alarm calls gray squirrels use are as follows:

When Do Squirrels Use Vocalizations With Tail Movements?

Squirrels use tail signals in combination with these vocalizations. According to squirrel vocalization expert Robert Lishak, the more threatened a squirrel feels the more likely tail movement will accompany its alarm calls.[2]

They found that moans, without tail movements, indicated an ariel predator approaching. Tail flags indicated a terrestrial predator, like a cat.

The researchers also found that the twitching tail signal was used in many different circumstances, even when there was no predator.

However, when paired with an alarm call the twitching tail indicated the presence of a specific type of predator. [3]

Other tree squirrels respond to these alarm calls by retreating to the treetops.[4]

Another study on American red squirrels and Eastern gray squirrels identified a rapid ‘kuk-kuk-kuk’ bark as an alarm call they use to communicate danger. [5]

A less-immediate danger is communicated by drawn-out ‘ku-u-ku.’ When the danger has passed, the squirrels bark out a slow ‘kuk-kuk-kuk.’

2. Communicate With Other Squirrels

Squirrels use their tails to communicate with other squirrels nearby. This is either to signal threats, warning calls, or other information.

How squirrel positions and moves its tail is a form of communication.

For example, dominant tree squirrels hold their tails in a relaxed manner, low to the ground, because they are less concerned about being attacked by another squirrel.[6]

According to the Auburn Squirrel Project, teeth chattering, squeaking, gnawing noises and rapid tail twitch are all forms of communication with other squirrels. [7]

3. Warn off or Distract Predators

If the predator realized the prey has spotted it and is on guard, the predator is more likely to give up on the hunt.

Why Squirrels Communicate With Predators

California ground squirrels approach rattlesnakes head first and make flagging movements with their tails. Researchers found that their tails heat up and rattlesnakes have infrared sensing so they see the heated tail.

It’s not known why the California ground squirrel does this. It could be to intimidate the snake or make their tail a moving target that still allows them to evade a snake strike. [8]

Whatever the reason, researchers noted that the snakes seldom strike an adult squirrel that is flagging its tail. If the snake does try to strike squirrels, the squirrels have a remarkable ability to dodge the snake.

Juvenile squirrels are not as quick and or as fortunate. [9]

It’s believed that adult squirrels approach the snakes to intimidate them and protect their pups.

This is what researchers found when they trained 22 fox squirrels to perform a series of foraging tasks.

They used locked and unlocked boxes containing walnuts to test the squirrels. When encountering a locked box, the fox squirrels flick their tails in annoyance.[11]

During mating season, squirrels that are fertile can display interest in mating by moving their tails in a way that looks like their tails are trembling or shivering.

The of trembling tails is to draw the attention of a potential mate.[12]

What Do Squirrels Use Their Tails For?

Squirrels use their tails in numerous ways:

This depends on the species.

How Do Tree Squirrels Use Their Tails?

Tree squirrels use their tails to help keep them stay balanced when climbing and leaping from tree to tree.

When leaping, squirrels hold their bushy tails out to increase their surface area. This helps create a parachute effect and slows down the speed of the fall. [13]

Bushy tails can also help keep squirrels warm. They can wrap it over themselves like a blanket when sleeping. They can also use their tails to shade themselves and beat the heat in summer. [14]

How Do Flying Squirrels Use Their Tails?

There’s a lot of interest in how a flying squirrel glides for miles using patagia, the gliding membranes that extend from wrist to ankle. What is often overlooked is the critical role the tail plays in their flight.

Before landing, a flying squirrel’s tail flattens, increasing the squirrel’s gliding surface by an additional 25 percent to help slow down their speed. The squirrel then drops its hips, which helps open the patagia like a parachute, and brings its back feet forward to land. [16]

How Do Ground Squirrels Use Their Tails?

Ground squirrels in warm regions can use their tails to create shade and help stay cool when foraging under the hot sun.

The California ground squirrel does this by pulling its fluffy tails over its back while walking on all fours. [17]

California ground squirrels also shake their tails at rattlesnakes to try to intimate them and protect their young.

How Do Squirrels Communicate With Other Squirrels?

Squirrels communicate with each other through vocalizations (barks and chirps), posture, the position of their tail, stamping of their feet, and tail twitches or tail whipping motions known as flagging.

Why Do Squirrels Flick Their Tails?

Squirrels flick their tails in frustration or warn other squirrels about predators. Squirrels’ vocalizations and tail flicks can also be directed at potential predators.

Why Do Squirrels Have Bushy Tails?

Squirrels that have bushy tails use them to help them balance when climbing, stabilize, and helping them land when they jump. They also use their bushy tail to shade themselves from the sun and cover themselves with its tail like a blanket and stay warm in winter.