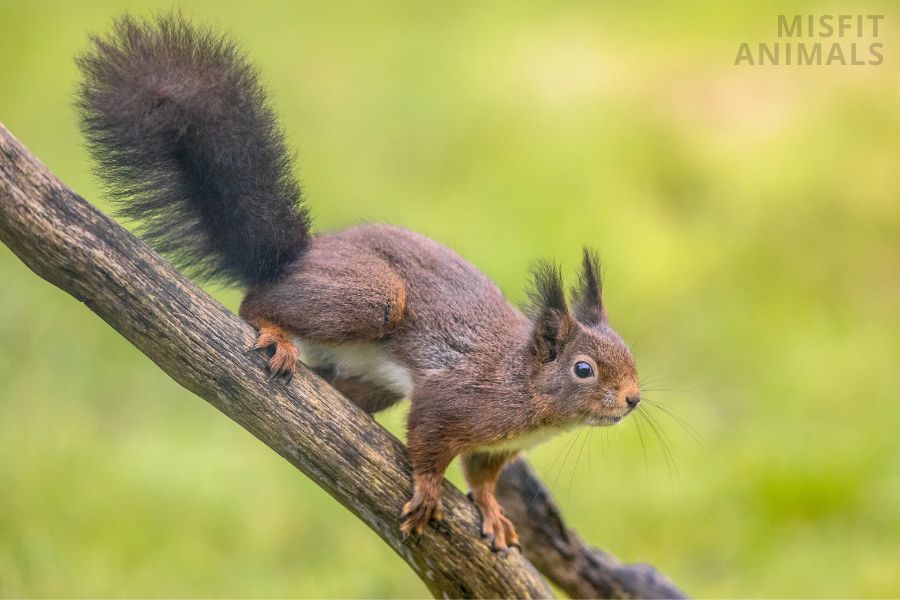 Squirrels live for 6 to 12 years in the wild, but a quarter of all squirrels die before they reach a year old. Squirrels kept in captivity can survive from 10 to 20 years.

Squirrels are widespread animals. This means they have adapted to their surroundings all over the world.

While this is true, they don’t have long lifespans. This is common for small animals. Their lifespan also differs depending on the species.

But why do so many squirrels die before a year old? And why don’t they live longer?

In this article, we answer these questions by exploring the life cycle of a squirrel and the common causes of premature death in squirrels.

Where Do Squirrels Come From?

Squirrels are native to North and South America, Europe, Asia, and Africa. [1]

The word ‘squirrel’ was first noted in 1327. It comes from Ancient Greek and translates to ‘shadow-tailed’.

There are three main categories of a squirrel:

In the U.S. the most common squirrels include the eastern gray squirrels, red squirrels, and fox squirrels.[2]

Squirrels go through four stages: babies, adolescents, weanlings, and adults. Baby squirrels are born blind and hairless. They stay in the nest for about two months before being weaned and leaving the nest.

Squirrels grow in their mother’s womb for 40-44 days and are born in late summer.

At birth, squirrels are blind and hairless. At about one month old (between day 28 and 35 days old) the young kittens open their eyes. Between 3 and 5 weeks old, the kittens start teething and their fur starts growing.

When they are between 6 to 14 weeks old, adolescent kittens grow their fur. They can now sit, stand, and hold food in their front paws.

By 8 weeks old their toenails become sharp enough to climb trees. They start to play fighting with their siblings.

Squirrel kittens stay in the nest full time until they are about two months old (between 56 and 70 days old) before being weaned and leaving the nest.

A young adult squirrel can consume its body weight’s worth of food every week. Their diet consists of seeds, nuts, fruits, roots, fungi, lichens, pine cones, and bark.[2]

They grow until they are nine months old, at which point they are full-grown adults.

How Long Do Squirrels Live?

Squirrels can live for 6 to 12 years in the wild and for 10 to 20 years in captivity. In the wild, the maximum life expectancy is 12.6 years for fox squirrels, 12,5 years for Eastern gray and black squirrels, 8 years for American red squirrels, and 10 years for the southern flying squirrel.

Let’s take a closer look at the lifespans and dangers facing the following common and popular types of squirrels found in the US:

Native to eastern North America, this squirrel was exported to other parts of the world. Today it is considered an invasive species in Europe because it disturbs native squirrels.

The Eastern gray squirrel has also been exported to and still lives in parts of Britain, Ireland, and Italy.

What Is the Lifespan of an Eastern Grey Squirrel?

The maximum longevity is 12.5 years in the wild. There is a record of one female living for more than 20 years in captivity.

As the name implies, American Red Squirrels have a reddish coat. They have a white underside, white rings around the eyes, and tufted ears in winter.

What Is the Lifespan of an American Red Squirrel?

Red squirrels have an average life expectancy of 5 years and a maximum lifespan of 8 years. [7] On average, only 22% of American red squirrels make it to one year old.

Due to their agility and speed, red squirrels have a high survival rate against predators and are not endangered. The subspecies known as Mt. Graham red squirrels, found only in southeast Arizona, are endangered.[8]

Also known as eastern fox squirrel or Bryant’s fox squirrel, they have brown-grey and brown-yellow fur with an orangish-brown underside. In the eastern regions, like the Appalachians, they can have darker brown to black fur with white bands on the face and tail.

Fox squirrels live in forests and smaller urban forested areas of 40 hectares (400 meters). They live in the eastern United States and the southern prairie provinces of Canada.

What is the Lifespan of a Fox Squirrel?

Males have shorter a lifespan as they roam farther when they leave the nest. This increases their risk of premature death.[10]

overhunting and the destruction of mature forests.

Mange mite, a type of skin disease caused by parasitic mites, and severe winter weather put pressure on this type of squirrel.

Research published in BMC Evolutionary Biology found that the black squirrel came about through interspecies breeding between the gray squirrel and the fox squirrel.

The study found the black squirrel to be a gray squirrel with a faulty pigment gene inherited from the fox squirrel. It’s this recessive gene that causes black pigmentation.[11]

Black squirrels can fair better in colder climates as studies show that black animals have 18% lower heat loss in temperatures below -10 degrees Celcius.[14]

Populations of black morph eastern gray and fox squirrels are found in the natural ranges of both species in North America.

What is the Lifespan of a Black Squirrel?

Southern flying squirrels are grey with a white underside and a flap of loose skin that extends from wrists to ankles to help them glide.

Southern Flying Squirrels live in woodlands and forests in the eastern half of the United States, southeastern Canada, Mexico, and Honduras.

What is the Lifespan of a Southern Flying Squirrel?

Southern flying squirrels live for 3 or 5 years in the wild, but most flying squirrels die before they are one. They can live up to 10 years. In captivity, they live for an average of 10 years with a maximum of 19 years.[14]

In captivity, Southern flying squirrels can live for 10 years[15]  and there are reports of them living up to 15 years in zoos.

A quarter of all squirrels die before they are a year old. Disease, predators, and accidents are leading causes of premature death in squirrels.[17]

4 Causes of Premature Death of Squirrels

1. Falling From The Nest

When a young squirrel falls from a tree, the mother can abandon it.

Disease, cataracts, parasites, and tooth loss impacts a squirrel’s life expectancy. It causes them to age faster, and it slows them down, reducing their ability to survive.

Humans hunt some squirrels for their fur and meat.

Young male squirrels search for new territory in the fall (autumn). Inexperienced at judging car speeds and crossing roads, they are prone to get run over. [18]

Some squirrels are endangered due to hunting and the loss of natural habitat. Most squirrels manage to thrive as they easily escape predators and have managed to adapt to urban settings with trees.

Squirrels are difficult to catch, thanks to their speed and agility when moving between tree tops. Many squirrels have also adapted to living in urban and suburban areas, as long as there are trees.

There is an endangered subspecies of the red squirrel. The Mt. Graham red squirrel. Their range of habitat is small, and they are only found in southeast Arizona.[6] They don’t adapt well, causing the population to decline.

There is also an endangered subspecies of a fox squirrel, the Delmarva fox squirrel. This species is endangered due to being overhunted and losing its habitat through the destruction of mature forests.