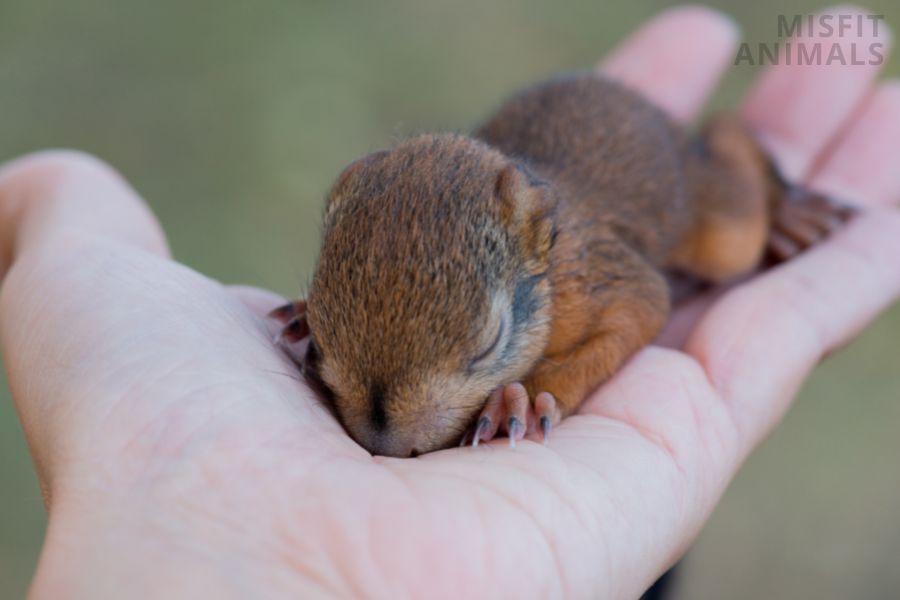 Baby squirrels are hairless, pink, and defenseless. They rely on their mother for care in their first few weeks. If you find a baby squirrel on the ground, wait to see if the mother squirrel comes to retrieve it. If she doesn’t come for the baby in five to six hours, you can rescue it.

There is nothing as heart-wrenching as finding a baby squirrel. You have to decide if you should let nature take its course or if you should try to save the helpless creature.

Because that is what newborn baby squirrels are: helpless.

So, what can you do if you find a baby squirrel that has fallen from the nest?

In this article, we answer the question of what to do if you find a baby squirrel, how to determine its age, and describe what baby squirrels look and act like.

What Are Baby Squirrels Called?

Baby squirrels are called kittens, kits, or pups. A group of baby squirrels is called a litter. A litter usually consists of two to four squirrel kits.

Squirrel kittens, kits, or pups are considered infants until they have all their fur, have opened their eyes, and are venturing out from the nest for brief periods.

Squirrel mothers wean their offspring when they are between 8-10 weeks[6] old. Once weaned, the offspring leave the nest and are considered young adult squirrels.

When Are Baby Squirrels Born?

Squirrels give birth from late winter and spring into the summer months. Some squirrel species reproduce twice a year, but many have one litter of kits per heat.

The most common tree squirrel, the eastern gray squirrel (Sciurus carolinensis), breeds twice a year. The females give birth to one litter of two to four kits in late winter and again in summer.

In temperate regions of the US, American red squirrels (Tamiasciurus hudsonicus) have two litters a year, one in spring and one in late summer.[1]

California ground squirrels (Spermophilus beecheyi) mate in early spring, after emerging from hibernation. The females give birth to a litter of five to seven baby squirrels about one month after mating.[4]

Squirrels born in late summer can stay in the nest with their mother until the end of winter. [6]

When Do Baby Squirrels Leave The Nest?

Squirrels leave the nest after they are 10 weeks old, once they have been weaned. At this stage, they are considered young adult squirrels.

Juvenile squirrels start venturing out of the nest between the ages of six and seven weeks old. They return to the nest, still feeding on their mother’s milk.

The mother squirrel starts weaning her kits when they are eight to 10 weeks old. Once the young squirrels are weaned, they leave the nest for good and start living alongside the adult squirrels.[5]

What To Do If You Find a Baby Squirrel

If you come across a healthy baby squirrel on the ground, wait to see if the mother comes to fetch it. If a baby squirrel is injured, take it to the nearest squirrel rehabilitator or a wildlife/exotic pets veterinarian.

Not every infant squirrel found on the ground is orphaned or abandoned. A mother squirrel will try to retrieve a baby squirrel that has fallen from her nest.

The mother squirrel will pick up the baby by the loose skin on the back of its neck and carry it back to the nest. [1]

You help the baby and mother by keeping your distance. If the young squirrel is in your garden, keep pets and household members away so the mother squirrel can retrieve it.

Female squirrels will not collect their fallen babies if there is danger around. Only once it is safe will the mother help her offspring.

Related: Can Squirrels Die From Falling?

When To Intervene And Rescue a Baby Squirrel

As a general rule, you shouldn’t rescue baby squirrels. But, if it’s cold, it’s close to nightfall, or the young squirrel is injured, you can intervene to rescue it.

If it’s cold, take these steps to help protect the infant squirrel from the elements:

Tree squirrel mothers do not retrieve their offspring at night. A defenseless squirrel infant left out at night is at high risk of dying of hyperthermia or being eaten by a predator.[7]

If you don’t know of a wildlife rehabilitator, contact your local vet or a vet specializing in exotic pets for advice.

When Not To Rescue a Baby Squirrel

Health juvenile squirrels do not need humans to intervene. Squirrels can return to their nests without help from 6 weeks old and are independent as of 10 to 12 weeks of age.

You can recognize a juvenile squirrel by its bright eyes and busy tail. Younger infant squirrels do not have bushy tails and squirrels under five-weeks-old have not opened their eyes yet.

If the young squirrel has not returned to its nest after six to eight hours, contact a wildlife rehabilitator.

How to Identify a Baby Squirrel By Age

Newborn squirrels are pink, hairless, and blind, with no visible eye slits. As the days pass, they grow fur, teeth grow, and open their eyes.

A newborn squirrel has no fur and is pink in color. Their eyes are closed and there no eye slits are not visible.

Newborn squirrels’ ears are folded flat against their heads. Their tails are also without fur.

A one to two-week-old squirrel’s head and back are a darker color, its eye slits are visible and the ears have started unfolding away from the head.

A three-week-old squirrel has short fur. The only spot that is still bald is the belly.

A four-week-old squirrel has thicker fur and its lower teeth have grown. They are almost ready to open their eyes.

A five-week-old squirrel has opened its eyes, grown fur all over its body, and the top teeth have grown.[6]

The juvenile squirrels look like smaller versions of adult squirrels. They leave and return to the nest and are active. At about eight weeks old, they play fight with each.

Is It a Good Idea to Keep a Baby Squirrel as a Pet?

Squirrels are wild animals and do not make good pets. Owning a squirrel is in many countries and U.S. states. But, even where it is legal, a squirrel is a high-maintenance pet.

If you are considering keeping a pet squirrel (especially a pet baby squirrel), make sure you are prepared for the following responsibilities:

What Can You Feed a Baby Squirrel

You can feed a baby squirrel formula to replace the mother’s milk, but only as advised by a wildlife vet or rehabilitator.

It is not advisable to feed a baby squirrel if there is a chance that it can be reunited with its mother.

If you have to feed an orphaned baby squirrel, it is best to do so under the supervision of a wildlife vet or wildlife rehabilitator.

Baby squirrels that are less than 10 days old need to be fed a warm milk replacer every 2 hours. This can be made with a mixture of goat milk, plain yogurt, heavy cream, and egg yolk.

The amount of milk replacer they need depends on the type of squirrel, age, and size.

Baby squirrels older than 10 days can be fed a ready mix milk formula as prescribed by a wildlife vet or rehabilitator.

You need to know the age of the baby squirrel before feeding it. You can ascertain this by how the squirrel looks, as described below. Another option is to take a picture of the infant and send it to a wildlife vet or rehabilitator for their assessment of the squirrel’s age.

A newborn squirrel looks similar to a hairless rat with a large head. Their furless skin is pink in color. They have hairless pink, long tails. A newborn squirrel’s eyes are closed, their eye slits are not visible, and their ears are folded flat against their heads.