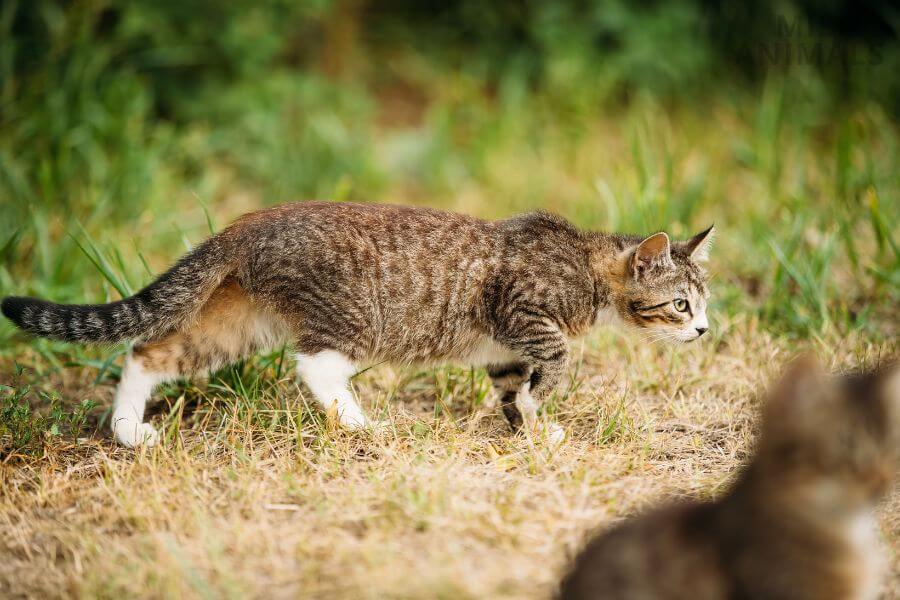 Ground squirrels and tree squirrels are vulnerable to being preyed upon while foraging for food on the ground.

Adult tree squirrels are often able to escape to tree tops quickly. Squirrels under a year old aren’t as lucky and are easier prey for predators.

Flying squirrels are nocturnal and avoid many predators this way. On the other hand, they have to watch out for animals that hunt when the sun goes down.

In this article, we look at fifteen squirrels’ predators and provide information about each one

Here is a list of 15 animals that eat squirrels:

Mink are known to hunt tree squirrels on the ground and in trees as they are excellent climbers.

Mink are found in forested areas near water throughout every state of North America, except Arizona, and most of Canada.

This medium-sized predator is a strong swimmer. In summer, mink hunt small rodents and ducks as well as diving for crayfish, frogs, and fish. Their winter diet is primarily made up of mammals, like mice, muskrats,  rabbits, shrews, and squirrels.[1]

Mink kill their prey with a fatal bite on the neck. They are known to prey on tree squirrels like Eastern grey squirrels.[2]

Mink can hunt squirrels on the ground, but if the squirrel tries to escape by running up a tree, the mink will follow. This is because minks are excellent tree climbers.

Like squirrels, mink can also jump from tree to tree and descend trees head first.[3]

Badgers catch most of their food by tunneling after burrowing rodents. Other sources of meat include ground-nesting birds, fish, lizards, amphibians, hibernating skunks, and carrion.

Although they are carnivores, badgers dig into a beehive and eat bees along with honeycomb. They also eat some corn and sunflower seeds. [4]

Bobycats are skillful hunters and have mastered a way to stalk animals like squirrels with as little noise as possible.

Bobcats stalk their animal without a sound by placing their back feet in the same spots where their front feet stepped.[5]

They stalk their prey for miles and often travel 2 to 7 miles (3 to 11 kilometers) while hunting. When they need to run, bobcats are fast and run up to 30 miles (48 kilometers) per hour.[5]

They stalk, pounce, and kill their prey by biting into the vertebrae of the prey’s neck.

Adult rat snakes prey on a variety of rodents, including squirrels. They also eat bird eggs and defenseless young birds.

Adults also eat bird eggs and young birds that do not put up a strong fight.[7]

Coyotes supplement their carnivorous diet with balsam fir and white cedar leaves and fruit including strawberries and apples.[8]

In urban areas, coyotes are known to eat domestic pets and human trash.

When hunting burrowing squirrels, like the thirteen-lined ground squirrels, coyotes often team up with badgers.

A seemingly unlikely partnership, the two work well together. The badger is good at digging into the burrows and the coyotes catch the squirrels when they come above ground to escape the badger.

They hunt on their own or in packs. They usually hunt in packs for large prey, like caribou, moose, deer, and bison. They also eat small mammals, like beavers, rabbits, squirrels, and fish, and will sometimes eat berries.

Wolves are also opportunists and will steal other predators’ kills and eat carrion.[10]

Golden eagles often hunt in pairs. One chases the prey, while the other swoops down and kills the now exhausted prey.[11]

Broad-winged hawks watch the ground for small mammals, like squirrels, to swoop down and catch.

The broad-winged hawk is one of the most common types of hawks in North America.

This carnivores’ diet includes insects, amphibians, reptiles, mammals, and birds.  Broad-winged hawks have excellent eyesight and swoop down on prey on the ground from a high perch.

They are known to eat small mammals whole, skin frogs and snakes, and pluck the feathers of small birds.[12]

The Marten’s diet consists of small mammals, with their favorite being red squirrels.

They kill prey by biting the back of the prey animal’s neck. They occasionally eat birds, fruit, nuts, insects, and carrion.[13]

These nocturnal predators live in rural and urban areas and start hunting when the sun goes down.

Barn owls can detect movement in grassland using their low-light vision. In complete darkness, they tune into their acute hearing to locate prey.[14]

Raccoons are omnivores known to eat Southern flying squirrels when they have the chance.

Raccoons are found across southern Canada, throughout most of the United States, and northern South America. They build dens in trees, but can also live in woodchuck burrows, barns, garages, rain sewers, and houses.

Raccoons are opportunistic omnivores who look for food at night. They are known to eat the nocturnal Southern flying squirrel. [15]

Naturally nocturnal, red foxes hunt for squirrels and other rodents at night. They are one of the most common enemies of squirrels.

Red foxes hunt from twilight and into the night. Their diet consists of rodents, including squirrels, eastern cottontail rabbits, insects, and fruit.[17]

Known for their speed and agility, red foxes are skilled squirrel hunters.

Red-tailed hawks are skillful hunters that use their keen eyesight to spot prey like ground squirrels.

These hawks are found throughout the United States and Canada.

Red-tailed hawks feed on a wide variety of prey, but about eighty-five percent of their diet consists of small rodents, like squirrels.[17]

This hawk species is known to prey on California ground squirrels.[18]

They are known to take over burrows of their prey and nest there.[19]

Whether it’s a well-fed house kitty or a feral cat, it’s a cat’s natural instinct to prey on birds, small mammals like squirrels, and fish.

Domestic cats are carnivores with similar nutritional needs as wild cats. They are the strictest of all carnivorous mammals but eat grass and other plants occasionally for dietary fiber.[20]

All cats bite prey at the back of the neck to sever the spinal cord from the brain stem.[21]

Domestic cats are naturally nocturnal and are known predators of the nocturnal northern and southern flying squirrels.[22]

How Do Squirrels Protect Themselves?

Squirrels protect themselves and fellow squirrels by sounding a warning call when predators are noticed. They rely on their speed and agility to escape predators.

Tree squirrels, like the Eastern gray squirrel, sound a warning call when a predator is spotted. This gives squirrels in the area an advanced warning.

Eastern gray squirrels’ excellent agility in the trees makes it difficult for predators to catch them.

When the other ground squirrels hear the alarm, they scurry to their burrows to evade would-be predators.[23]

Yes, weasels, like long-tailed weasels, are able to crawl in burrows and prey on and eat burrowing ground squirrels and other rodents.

Yes, North American gray and red squirrels have been observed to eat other squirrels. This has occurred during food shortages and when male squirrels have killed females’ infants in order to ensure they can mate with them.