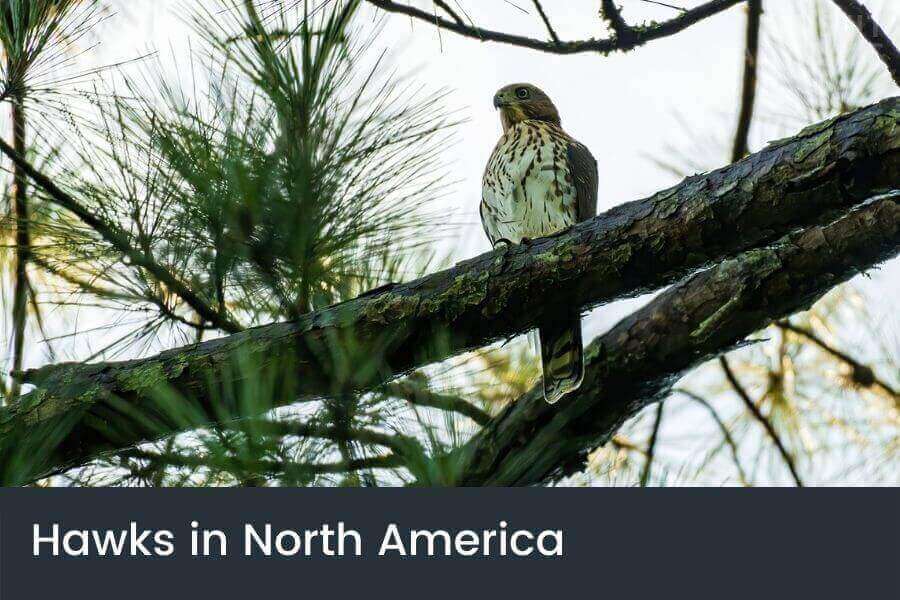 There are about 19 types of hawks in North America, where at least 11 of these can be found in Canada and the US. These include both small and big species.

There are 19 different types of hawks in North America, and each has its own unique characteristics.

Whether you’re a hawk enthusiast or just getting started in bird watching, learning about the different types of hawks is a great way to increase your knowledge and appreciation for these amazing animals.

In this blog post, we’ll take a look at some of the most common types of hawks in North America and discuss their defining characteristics.

Are There Hawks in North America?

Hawks are native to North America, and can hence be found all over. They are distributed from the very northern parts to the southern parts.

Hawks in North America come in all shapes and sizes and live different lives depending on the species.

The hawks in North America are known to live primarily on the open land, grasslands, and deserts of both Canada and Mexico.

Some hawks do live in more forested areas but they prefer large tracts of open fields.

Let’s take a closer look at each of these species to understand them better.

19 Types of Hawks in North America

Here are the 19 species of hawks in North America:

The broad-winged hawk (Buteo platypterus) is a true raptor and is one of the most common hawks in North America.[1]

It has brown feathers on its back, white feathers covering its front, yellow legs, and a wingspan of forty inches.

It is common in both deciduous and mixed forests, although it can also be found perched near bodies of water. In the United States, the broad-winged hawk has been documented from North Carolina to Florida and westward towards Texas.

The common black hawks (Buteogallus anthracinus) are formed of the genus  Buteogallus, and like many other hawks, they can be found throughout North and South America.

The common black hawk is distributed to Central America and some parts of Mexico, while the great black hawk (Buteogallus urubitinga) is located in the humid forests of South America.

The common black hawk has a wide distribution range and can be seen from Southern Mexico to northern Argentina, with some black hawks migrating in winter to warmer regions.

These hawks live in open country and forest edges, following the herds of their major food sources.

The Cooper’s hawk (Accipiter cooperii) is a medium-sized raptor, averaging about 17 inches in length. They are most commonly found throughout the United States and Mexico.[2]

They have also been known to migrate as far south as Chile and Brazil. While this bird of prey generally doesn’t travel alone, some birds might migrate with other it.

Cooper’s hawks most commonly eat small mammals, such as mice, rats, squirrels, and chipmunks. They have also been known to prey upon birds.

The Crane Hawk (Geranospiza caerulescens) is a medium-sized hawk that lives in several regions of North America. It is typically found in grasslands and marshes and feeds on mammals and reptiles.

They make nests out of twigs and eat prey like:

The hunting strategies of the Crane Hawk include perching on branches and waiting to ambush their prey.

The Ferruginous Hawk (Bueto regalis) is found all over North America. It belongs to the family of Accipitridae, which consists of diurnal birds that hunt through flight.

This hawk is the biggest of all hawks and hence preys on various animals such as rabbits, hares, squirrels, and marmots.

The ferruginous hawk has an average length of about 60 to 70 cm.

It mostly resides in the open grasslands with scattered bushes or trees for nesting purposes. They are also found in broken forests with large clearings that provide them with ample hunting grounds.

The Gray Hawk (Buteo plagiatus) is a very common type of hawk that lives in North America. It can be found all over the United States, with sightings as far south as Mexico and Guatemala.

It especially likes to live by open woodlands and large fields for hunting its prey or perching on tall trees with a clear view of the land.

Gray hawks like to eat mice, lizards, and other smaller birds.

The Great Black Hawk (Buteogallus urubitinga) lives in tropical and subtropical regions of South and Central America and is the largest black hawk. It also inhabits parts of southern Texas, where it was hunted to extinction by the early 20th century.

This bird mostly inhabits forested habitats near water and is listed as “Least Concern” on the IUCN Red List.[3]

When flying, this species looks huge with a broad, rounded wingspan. It is primarily black with a white head and underparts. The bill is blackish and the eyes are yellow.

In juveniles, most of the underparts are brown instead of white.

The Harris’s Hawk is a medium-sized hawk. It breeds from southwestern Oregon, the western two-thirds of California, southern Arizona, New Mexico, central Texas, and south to northern Argentina.

These are migratory birds, and their winter range spans from central Mexico through Central America to Panama.

The Harris’s Hawk is a medium-sized hawk that can measure up to 18–24 inches long and weigh between 1.5 to 3 pounds. It has short legs, long pointed wings, and a long tail.

The male looks much different than the female does. While both have gray backs, the male has white bars across their chest that are visible in flight, while the female has a dark chest with no sign of these markings.

The Northern Goshawk (Accipiter gentilis) is one of the largest of the true hawks, but it is seldom seen because it prefers dense forests throughout most of its range.

Seen occasionally in open areas, the goshawk hunts birds and squirrels among trees and takes rabbits, pheasants, and grouse.[3]

The Northern Goshawk is mainly a resident of the northern United States, southern Canada, Alaska, and northeastern Asia.

Both types of harriers are medium-sized birds of prey that breed in North America and Europe/Asia.

Red-shouldered Hawks (Buteo lineatus) are fairly common, but you’re more likely to hear one than see one, as they frequently screech.

Red-shouldered hawks can be distinguished from other raptors by their bright white/golden breasts and belly, black stripes on their legs, and yellow feet. Their wings feature a thick brown stripe along their shoulders, which gives the bird its name.

The red-shouldered hawk inhabits woodlands near rivers and swamps in eastern North America. You can find them easily if you live or spend time in the woods of New Jersey, Maryland, Virginia, North Carolina, and South Carolina.

Red-shouldered hawks are also occasionally sighted in the Upper Peninsula of Michigan, Ohio, and Indiana.

The red-tailed hawk (Buteo jamaicensis) is one of the most common types of hawks in North America. It’s a large, slim hawk with long wings and a short tail with dark brown upperparts and pale underparts.

The red-tailed hawks are diurnal birds of prey that hunt during the day. They primarily hunt small mammals, rodents, and insects.

This type of hawk migrates each year. Before winter, they’ll leave the northern parts of America and head southward.

The Roadside Hawk (Rupornis magnirostris) is a species of bird that lives in the grasslands and savannas of South America.

The Roadside Hawk prefers to live in open areas with low shrubs and scattered trees or cacti.

It likes grasslands and savannas because it provides the open expanses and sparse vegetation that this hawk needs to hunt.

The plumage of the Rough-legged Hawk is dark brown, with white bars on their underwings; the tail is banded with brown, black, and white.

Their legs are feathered almost to their feet; this keeps them warm in the extremely cold climates they inhabit most of the year.

The sharp-shinned hawk (Accipiter striatus) is a small hawk that breeds throughout the northern two-thirds of North America, from central Alaska and Canada to as far south as Panama and the West Indies.

It is migratory, wintering in southern Canada and through much of the United States.

This is a separate species from the Eurasian sharp-shinned hawk, a scantily documented visitor to North America.

The Short-Tailed Hawk (Buteo brachyurus) is an American bird in the genus Buteo. They’re found in South America, from Brazil to the Mexico-Arizona border.

This bird usually measures about 20 to 23 inches long with a wingspan of about 40 to 44 inches.

As the name suggests, it is a bird with a very short tail; its beak and talons are also longer and stronger than other hawks. The Short-Tailed Hawk has long, broad wings and a strong neck that lets it dive into forests to catch prey such as rabbits or squirrels.

Swainson’s Hawk (Buteo swainsoni) is a large, dark raptor. The Swainson’s Hawk is often mistaken for the Red-tailed Hawk because of its color and shape.

It can be distinguished from the red-tailed hawk by its tail pattern.

These hawks reside both in northern and southern parts of America, depending on the season. They’re long-distance migrators. They typically inhabit prairies and dry grasslands.

The bottom of the Swainson’s Hawk’s tail has two or three dark bands. The top of the tail is banded with dark brown, black, and white. It has a dark grayish-brown body, reddish-brown shoulders, and a light-colored stripe on its side.

Like other hawks, Swainson’s Hawk has sharp talons used to grasp prey before killing it.

The White-Tailed Hawk (Geranoaetus albicaudatus) is a hawk that is native to North America, the northernmost being the Aleutian Islands.

Since it has a larger wingspan than other hawks, this creature can fly at an incredible speed of up to 30 miles per hour. In addition, this animal has very keen eyesight.

The White-Tailed Hawk is known not only for its speed and sharp vision but also its distinctive cry, which can be heard from a distance away.

It is usually found in the open areas of the North American region such as parks and farmlands. It is most likely to be seen perched on the top of the trees and poles during the daytime.

Distributed throughout the Americas, these predatory birds display two morphs: rufous or grayish. Both have black wingtips and tails banded with white.

Some have a black head with a white streak down the middle of the crown, which runs from between their eyes to behind their ears.

These hawks forage for food in grassy areas and open woodlands.

How Many Types of Hawks Are There in North America?

There are 19 species of hawks that can be found all over North America. These include the Broad-winged Hawk, Swainson’s Hawk, Rough-legged Hawk, Golden Eagle, Northern Harrier, Sharp-shinned Hawk, Cooper’s Hawk, and more.

What Is the Most Common Hawk in North America?

The most common hawk in North America is the red-tailed hawk, found throughout North America. This raptor can be recognized by its rust-colored tail and creamy-white belly with dark brown streaks running from under its head to its wings.

How Many Hawks Are There in North America?

While it’s difficult to pinpoint the number of hawks in America, there are about 1,960,000 Red-tailed hawks alone. About 90% of the global population of red-tailed hawks reside in North America.