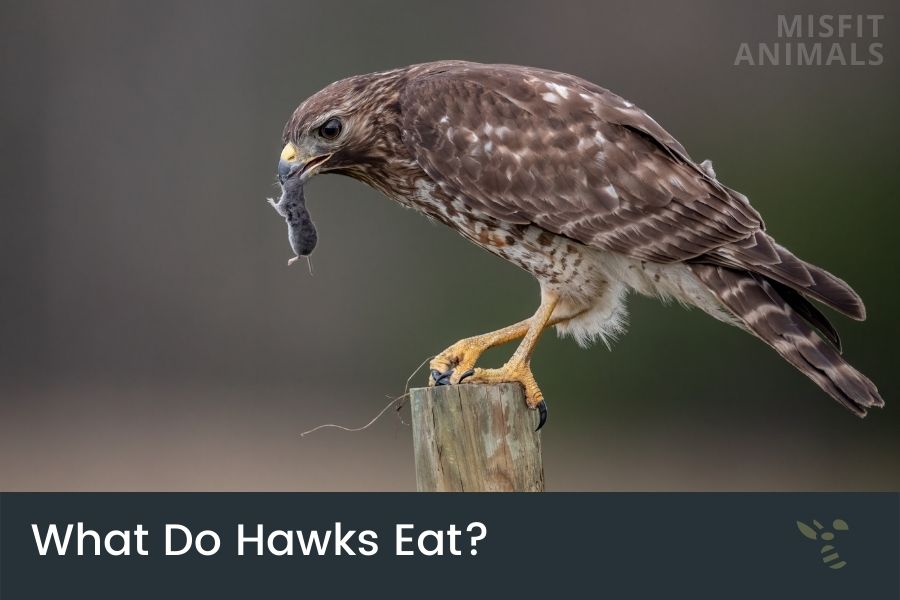 Hawks only eat meat. They’re predatory carnivores and eat a variety of animals such as birds, rodents, insects, reptiles, and sometimes fish. They both hunt and scavenge for food.

Hawks are predatory birds that are known for their keen eyesight. They’re incredible hunters, making great use of speed, accuracy, and the element of surprise.

As for feeding, they largely depend on their hunting skills, though there are exceptions. Their diet also changes according to their species.

In this article, we will take a closer look at hawks’ diet, how they hunt, and what they prefer to eat depending on the species.

What Do Hawks Eat?

Hawks are birds of prey, meaning they hunt and eat other animals for food. They’re carnivores, and hence don’t eat plant matter. Their digestive system can only process meat.

These predators prefer small-sized prey, including:

Let’s take a closer look at the different prey that hawks like to hunt.

Hawks frequently prey on rodents. There are plenty of them, and they’re easy for hawks to catch. However, rodents can also prove a health risk to hawks.

These small animals are seen as pests by most people. Hence, they’re often poisoned. As they’re a frequent part of hawks’ diet[1], hawks can end up being poisoned as well.

Rodents have a high reproductive rate, which is why there are so many of them. Hawks help control the population of rodents.

Rodents included in hawks’ diet include:

Insects are another prey that most hawks eat. Hawks eat insects because they are easy to catch and provide plenty of energy and protein. They’re also the most abundant animals on earth.[2]

These prey animals are also great for baby hawks, as they’re small and easy to ingest.

Most raptors prey on birds, including hawks. As hawks are generally smaller than other birds of prey, they tend to prey mostly on songbirds.

The sharp-shinned hawk, which is a common hawk found in North America, solely relies on songbirds. Their diet is almost 100% made up of these small birds.

Reptiles are animals that are usually distinguished by their dry, scaled skin. These scaled beings are preyed upon by hawks, though only the smaller types such as small snakes and lizards.

Reptiles included in hawk’s diet include:

Hawks have a unique relationship with poultry. While they love preying on them, some poultry is too big for them to hunt. Hence, hawks only prey on small poultry, such as small chickens and ducks.

Many farmers have been known to lose chickens and ducks to hawks.

These small raptors can also hunt as a group[3], allowing them to hunt for larger poultry.

Hawks are some of the most common predators across North America. They generally eat what is easiest to catch, like rodents, rabbits and other small mammals. However, hawks will occasionally eat fish as well.

The Swainson’s hawk has been observed catching and killing tilapia, a fish species commonly farmed for human consumption.

Of course, the most common types of fish eaten by hawks are small and usually live close to the water’s surface (like goldfish).

What Do Hawks Eat In the Wild?

Hawks living in the wild have a very varied diet, as there are plenty of animals available to hunt, including small mammals, birds, rodents, reptiles, fish, amphibians, and more.

The main food source for wild hawks include:

What Do Hawks Eat In the City?

Hawks have adapted well to city life over the years. They’ve adapted to live in parks, schoolyards, abandoned lots, or big trees in gardens.

Similarly, their hunting behavior has also adapted. They still feed on whatever they can find, but their prey is highly limited compared to hawks living in the wild.

Hawks living in cities, or other urban areas, tend to eat mice, rats, squirrels, small birds, and other animals that are commonly seen as pests.

Pet hawks eat the same things as hawks in the wild or in the city.

Related: How Much & How Often Do Hawks Eat?

Yes, hawks are carnivores. Hawks only eat meat, as their digestive system can’t process vegetables, fruits, dairy, or other vegetation.

Hawks are built for hunting and eating animals. They only eat meat, hence their digestive system is highly specialized to process this.

Hawks have a sharp hooked beak and talons, which are their main hunting tools. When these birds catch prey, they will use their large hooked beaks to tear apart the flesh of their prey.

Different species eat different things. While there are overlaps, they typically stick to their preferred prey. Hawks’ diets typically depend on their genus.

There are two types of hawks: buteos and accipiters (also known as bird-hunters).

What Do Red-Tailed Hawks Eat?

The diet of Red-Tailed hawks includes mice, squirrels, rats, chipmunks, birds, reptiles, and others. They’re part of the Buteo genus.

These birds do not hunt alone but work in pairs.

When hunting, the hawk swoops down on its prey with full force attempting to catch it in mid-air. The red-tailed hawk has even been observed plunging from as high as 150 feet onto its prey.

What Do Cooper’s Hawks Eat?

Cooper’s hawks are found throughout the Americas and mostly eat medium-sized birds and small rodents.

The diet of these hawks consists primarily of medium-sized birds as they’re part of the Accipiter genus. These are hawks that mostly eat birds.

Cooper’s hawk diet can also include bird eggs but this behavior is not recorded often.

What Do Northern Goshawks Eat?

The northern goshawk mostly hunts small mammals such as rabbits, squirrels, and birds.

The Northern Goshawk (Accipiter gentilis) is one of the most common forest-dwelling birds in North America. It has a vast range, stretching from the boreal forests of Ontario all the way to New Mexico.

The northern goshawk hunts from a perch high up in the tree-line. It scans the ground for the movement of potential prey. When it spots a potential meal, it swoops down and captures its prey with its powerful talons.

What Do Sharp-Shinned Hawks Eat?

The sharp-shinned hawk (Accipiter striatus) is a small member of the Accipitridae family. It is native to North America and has a diet that consists almost entirely of songbirds.

They can be located in forested areas or near wetlands, as well as city parks and some residential areas.

Sharp-shinned hawks typically lay three to five eggs each season, which they incubate for 30 days. Their nests are easily identifiable by the large number of feathers used to line them, and can often be found in shrubs or trees less than 14 m off of the ground.

What Do Baby Hawks Eat?

Even though baby hawks are not able to hunt for themselves, they’re still very much at home in the wild. Their diet consists primarily of small birds and insects with a little bit of rabbit here or there!

Baby hawk parents will feed their young from time to fed by throwing pieces upon them into its nest where it waits patiently.

Related: What Do Baby Hawks Eat?

How to Protect Your Yard From Hawks

As a homeowner, you may be dealing with hawks hanging around your yard. This is especially a problem if you also have pets or livestock.

Let’s take a deep dive into a few tips to help you protect your yard from these birds of prey.

A great way to protect your yard from hawks is to provide shelter for your animals.

Providing cover can stop hawks from hunting your animals[4]. You can do so by using thick hedges, fences, or roofing.

While hawks don’t eat from bird feeders or other feeders, they’re very intelligent. Once they see that animals keep returning to these feeders, such as birds, they’ll stick around for future animals looking for food.

Hence, it’s important to shield any feeders you may have.

Here’s how to shield a bird feeder from a hawk.

Ground feeding is the practice of leaving food on the ground for animals, so they always have the option to feed on it. This can be dangerous for your garden and yard if you live around hawks, as these birds are attracted to food.

You can either change your feeding method, or you can clean up after yourself. Either way, you should remove food from your yard.

Use Netting Above Housing

Another effective way that you can protect your yard and home from hawk attacks is to use netting above the housing.

The netting will help avoid the entry of any predators, including hawks looking to prey on your birds or other animals.

If you have livestock and want to protect yourself from predation by hawks, it is advisable that you invest in high-quality netting above the housing.

Hawks are birds of prey, meaning they hunt for food. Without knowing it, you could be providing hawks with food. Hence, removing any food sources is a great way to deal with a hawk problem.

This also includes small pets or livestock. Either move them or build additional housing.

If you have a pond on your property, keep the water level low to discourage amphibians. With any luck, removing food sources will reduce the number of hawks that start frequenting your yard.

Hawks are scared of owls. Hence, an owl decoy works great at scaring hawks away.

Hawks are smart, so the owl decoy needs to look authentic.

The decoy has to be life-size with realistic-looking eyes and an open beak. Make sure that you hang up the owl decoy near your garden or fruit-bearing plants.

The short answer is yes. Most hawks feed on birds in one way or another. Accipiters, a genus of hawks, rely more on birds than other hawks. The sharp-shinned hawk almost solely eats songbirds.

Yes, hawks eat rabbits. Wild rabbits are often hunted by hawks, as there are typically plenty of them in forested areas, and sometimes even in open lands.

Hawks do eat snakes from time to time, but it’s not a big part of their diet. They also eat other reptiles, such as lizards or salamanders.

Foxes are generally too big for hawks to hunt. However, some hawks hunt in groups, which is when a fox may be hunted. Fox kits (baby foxes) may also fall prey to hawks, as well as dead foxes.

Hawks do not eat fruits. They can’t process plant matter and would get sick from eating fruits, or any other plant. They only eat meat.