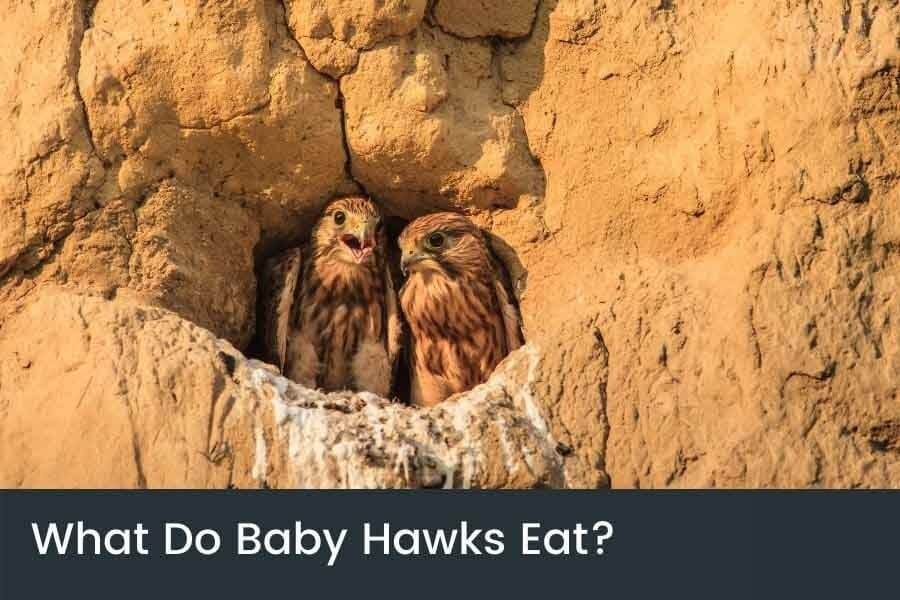 Baby hawks eat a combination of insects, birds, small mammals, and rodents. Hawks only eat meat, as they can’t process plants, dairy, or fruits. If you come across an abandoned hawk baby, don’t feed it milk but meat and water.

Hawks are, as other birds of prey, carnivores. They eat meat to survive.

As adult hawks are skilled hunters, they have no issue securing a meal. However, that’s not the case for younglings, who need to be fed by their parents.

But what do baby hawks eat?

In this post, we’ll explore some of the different things that baby hawks might eat, how they’re fed, and the difference among species.

What Do Baby Hawks Eat?

A baby hawk’s diet consists of much the same as an adult, including insects, small birds, small mammals, and rodents. Until they’re 4 to 5 weeks old, their mother feeds them by giving them small pieces of meat from prey she, or the male catches.

The diet of a baby hawk depends on a large variety of factors including what type of baby hawk they are, how young they are, and where they live.

However, they largely eat the same things as adult hawks. For the first part of their lives, they’re fed by their mother. When they reach 4 to 5 weeks, they start eating by themselves.

Insects are a big part of any hawks’ diet, especially when they’re young. The most common insects eaten by hawks include:

Birds are frequent prey of hawks[1]. It’s one of the biggest parts of hawks’ diet, as some hawks almost exclusively hunt songbirds.

As songbirds, waterfowl, and upland game birds are easier to catch, these are typically the ones that are hunted.

Here’s a list of birds that baby hawks frequently eat:

Another major part of many hawks’ diets are small mammals. Hawks seem to prefer mice and other small prey over most other types of foods because they are abundant, easy to catch, and readily available.

Mice are high in protein and fats, which is what growing birds need most in their diets. Here are some of the small mammals eaten by baby hawks:

Rodents are a big part of Buteo hawks’ diet – these are hawks that hunt in open land. Here, rodents are easy to spot compared to a forested environment. The most common rodents include:

How Do Hawks Feed Their Babies?

Once the mother hawk has captured her prey, she tears it into smaller pieces that are easier for the baby hawks to swallow. She then carries these morsels back to the nest where she feeds them to her young[2].

After 4-5 weeks, the baby hawks are able to begin eating whole prey on their own. Their mother continues to feed them for an additional 2-3 weeks until they fledge.

This feeding behavior of tearing food into smaller pieces and carrying it back to the nest to feed it to the young happens regardless of what kind of prey the mother catches. They basically swallow whatever their mother brings them.

What to Feed Baby Hawks

If you come across an abandoned baby hawk, you should feed it small pieces of meat and a few drops of water. Don’t give them milk and bread, as they can’t process them.

A baby hawk eats the same food as an adult hawk: meat.

Unfortunately, nature can be harsh at times, which can lead to abandonment. If you ever come across a hungry baby hawk, and you want to feed it, you should provide it with small pieces of meat.

Make sure that it’s really abandoned, and that its mother isn’t around. Next, you should call Animal Rescue.

What Not to Feed Baby Hawks

You should never give your baby hawk any dairy products, vegetables, or fruit. Also, never feed a hawk anything spoiled or rotten. Throw the food away immediately if it is contaminated.

Hawks rely entirely on meat for sustenance, as their digestive system can’t process anything else. Dairy and plant matter will cause more harm than good.

Can You Feed Wild Hawks?

You should not feed a wild hawk. They’re great hunters, and if they’re hungry, they should have no problem finding prey and catching it. They’re also not very fond of humans, and will most likely fly away.

Hawks rely on their hunting skills to survive. And they’re skilled at it. If a hawk is hungry, it’ll hunt down prey.

Some people think that because a wild hawk is injured or sick, feeding it will make it better. In some cases this might be true, however, more often than not it will make the animal dependent on humans for food and kill it.

Fruits, berries, plants, dairy, and other food resources are not a part of a hawk’s diet. It’s 100% made up of meat. Hence, it’s safe to assume that they are carnivores.

While other birds may feed on plant matter, birds of prey feed on exactly that: prey.

Hawks have sharp talons which they use to catch their prey. The talons allow the hawk to hold on to the prey, even when it is struggling.

Types of Hawks and Their Diets

There are two types of hawks: Accipiters and Buteos.

Hawks are well-known predators in the avian kingdom. The diet varies from species to species, and may also deviate depending on location, capabilities, and availability.

Some hawks prey mostly on birds, while other hawks hunt more rodents.

What Do Sharp-Shinned Hawks Eat?

Sharp-shinned hawks (Accipiter) are the smallest type of North American hawk, and their diet is almost entirely made up of songbirds (of all sizes).

Although they will eat other prey, such as rabbits and amphibians, this dietary preference makes them especially dangerous to songbird populations. This is large because songbirds also are small, and there’s plenty of them.

What Do Cooper’s Hawks Eat?

Cooper’s hawks (Accipiter) are medium-sized raptors with short, barred tails and long wings. They have gray bodies and have brown heads, breasts, backs, wings, and tails.

These birds of prey primarily eat small animals such as mice, squirrels, songbirds, frogs, fish – as well as rabbits and hares. Adult Cooper’s hawks eat larger prey than the juveniles, although they will still hunt some smaller animals.

What Do Northern Goshawks Eat?

Northern Goshawks (Accipiter) eat many different kinds of food. They like to eat songbirds and grouse, but they also like to hunt woodpeckers.

Sometimes northern goshawks will go after animals that are bigger than themselves. They have also been known to attack young red-tailed hawks or osprey.

What Do Red-Tailed Hawks Eat?

Red-tailed hawks (Buteos) are medium-sized hawks in North America. They have brown feathers with red on their tail, and their eyes are dark.

As far as animals go, red-tailed hawks eat mostly rodents, including ground squirrels, pocket gophers, and mice. However, they also like to eat larger mammals like rabbits, skunks, and even other birds if they are small enough for the hawk to catch.

These animals are usually hunted on or near the ground, but red-tailed hawks can fly at great heights to capture prey out of midair as well.

How Often Do Baby Hawks Eat?

Growing birds need to feed more often than adults, but they’ll feed less when doing so. When they’re very young, they may eat every other hour.

During its first week of life, a baby hawk eats almost constantly. Each day it needs two or three prey items, and the more often the better because it’s growing at such an accelerated rate.

Baby hawks are fed by their parents. In the first 4 to 5 weeks, their mother will tear small pieces of meat off of the prey and feed it to the young.

After this initial period, prey is simply thrown into the nest for the young to feed on by themselves.

A baby hawk needs to eat often in order to grow quickly, and because it’s developing so rapidly, it also has to eat a lot (relative to its size) in order to get enough nutrients.

Related: How often do hawks eat?

What Do Adult Hawks Eat?

Adult hawks eat many of the same things that baby hawks eat. The diet doesn’t change much, as they simply eat smaller pieces and smaller quantities.

The diet doesn’t differentiate much between adult hawks and baby hawks. Some of the most common prey for adults hawks include:

Depending on the species, and the type (accipiter or buteos), a hawk’s diet may vary.

Baby hawks and adult hawks eat mostly the same foods. They both eat small animals, such as mice and crickets, songbirds, small mammals, and insects.

Baby hawks eat more often though. They need food often to keep up with their rapid growth in this stage of their life. Depending on their species, they may eat more rodents or birds.