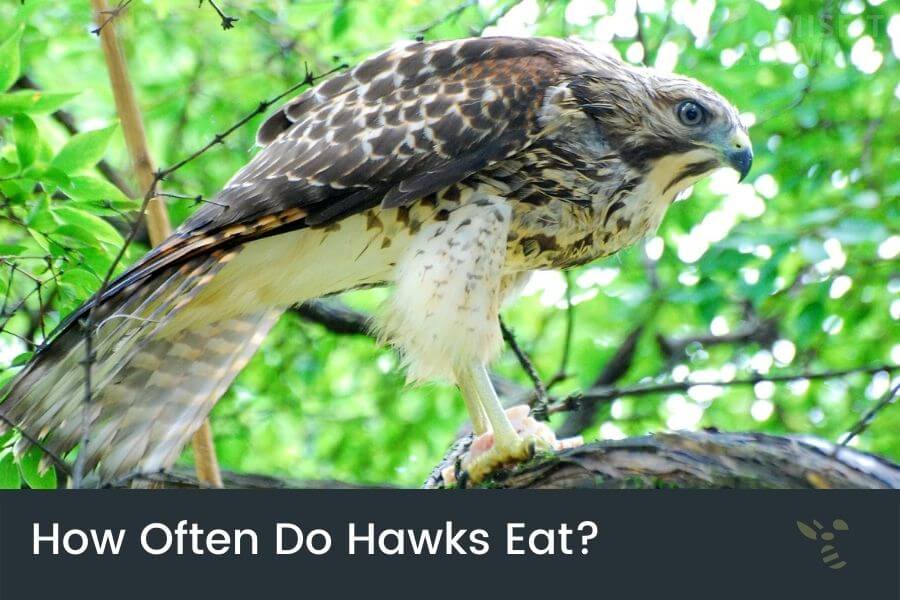 Hawks eat about 12-15% of their body weight per day and may eat every one to three days. It takes a great deal of energy to fly, hence they need to eat the corresponding amount of calories.

Hawks are birds of prey, hence they rely on their hunting capabilities to survive. Hunting requires a lot of energy, which is why hawks eat quite a lot for their size.

But how much do they really eat? And how often?

In this article, we’ll answer those questions, provide some insight into how hawks go about catching prey, as well as what prey they eat.

How Often Do Hawks Eat?

Hawks eat every one to three days, depending on the size of the prey. If their prey is small, they may hunt multiple times a day.

The prey is also a significant factor when it comes to feeding.

If a hawk catches something large, it might not have to feed for another two days. However, if the hawk catches a smaller animal, it may have to go hunting again later the same day.

It all comes down to circumstances.

Related: What do baby hawks eat?

What Affects a Hawk’s Eating Schedule?

Several factors affect a hawk’s eating schedule. The two most significant are the size of the prey and the size of the hawk. Bigger hawks eat more, and smaller prey provides less energy.

Hawks are carnivorous birds of prey that hunt and feed on other animals. While hawks are great hunters, it’s not always easy to find prey to fill upon.

Here are the two main factors that dictate a hawk’s feeding schedule.

Size of the Prey

A hawk’s eating schedule is primarily affected by how much prey it can capture, as well as the size of said prey[1].

It goes without saying, that a larger animal will provide more food, compared to a small animal. More meat equals more calories, and hence more energy, which will keep a hawk fed for longer.

For instance, if there are bigger birds available, such as pigeons or ducks, hawks will most likely target these. However, hawks must eat more frequently when the available prey is smaller birds or mammals.

Size of the Hawk

As hawks get bigger, they require more calories. This goes for all animals and humans. The bigger you are, the more you (generally) need to eat, because it takes more energy to move around.

On the other hand, bigger hawks also have the capabilities to take down larger prey, that may not be available to small hawks.

How Much Do Hawks Eat?

Hawks eat a wide variety of prey, from mammals to reptiles and amphibians. When they eat, they consume meat equivalent to about 12-15% of their body weight.

Sometimes they eat more, other times they eat less. It does of course depend on how long they’ve gone without food, how hungry they are, and if they also have to feed younglings.

How Many Birds Do Hawks Eat per Day?

A hawk can eat anywhere from zero to eight birds per day. The average is about two to three birds per day, if they hunt every day.

Depending on the type of hawk, Accipiter or Buteos, the majority of their diet either consists of birds or rodents, reptiles, amphibians, and insects.

If a hawk eats 3 birds every day, it would end up having eaten more than 1.000 birds in a single year.

What Time of Day Do Hawks Feed?

Most hawks hunt either in the early morning or late evening, at dusk and dawn, but may also be seen throughout the day. They’re diurnal creatures, meaning they are active during the day.

In general, hawks are considered to be active around three hours after the sun rises, and for one or two hours before it sets.

Hawks are diurnal raptors, meaning they are active during the day. Hawks tend to be most active at dawn and dusk, however, because it is cooler outside at these times.

Different birds of prey may have different feeding times. Some birds feed at night time, but this is mostly limited to those who can see well in the dark (e.g. owls).

Additionally, different parts of the day may be preferred by different hawks. During warm days, there’s a good chance they’ll set out early in the morning. On colder days, they may wait until later in the day, when it’s warmer.

Related: Do hawks hunt at night?

Do Hawks Eat Their Prey Whole?

Hawks do eat the whole prey, but they do not eat it in one piece. While they can’t swallow an entire bird carcass in one bite, they will eat the feathers, bones, and other parts.

Hawks aren’t picky. They eat every part of their prey, including feathers, fur, bones, and so on.

Hawks do not eat the whole prey when scavenging. When feeding on dead animals, they stick to the meat.

However, they do not swallow their prey in one piece (such as snakes). The prey is torn up into pieces small enough so that the hawk can swallow them.

What Do Hawks Eat?

Hawks are birds of prey, meaning they hunt and eat other animals. Their primary prey includes birds, rodents, small mammals, and insects.

Hawks are built for hunting. They have hooked bills that are well adapted to tearing their prey apart, as well as sharp talons built for gripping and tearing into flesh.

As they are birds of prey, they prey on other animals. They hunt them down, using advanced hunting techniques, kill them, and eat them.

All hawks are carnivores[3]. They only eat meat, as their digestive system can’t process anything else (such as plants, fruits, or dairy).

Related: What do hawks eat?

The most common type of hawk in North America is the Red-tailed hawk, whose diet consists mainly of small mammals such as mice, rats, and rabbits. These are part of the genus Buteo.

Another type of North American hawk is the Sharp-Shinned hawk. These are part of the genus Accipiter and hence feed primarily on birds (their diet consists of almost 100% of songbirds).

Other types of hawks evolved to eat larger prey. The Northern Goshawk for example feeds on a wide range of birds and mammals including grouse, owls, and even small foxes.

Can Hawks Starve to Death?

While hawks do typically hunt in pairs, sometimes they may be alone. If they become sick or injured and can’t hunt for themselves, there are no other hawks to help them, which could result in starvation.

Hawks are great hunters, and will hence rarely die from starvation.

Only a small percentage of raptors (falcons, eagles, hawks, and owls) die from starvation. This only happens when they are unable to hunt or don’t know how to hunt.

This isn’t commonly seen in adults since they are better hunters, but young raptors (from birth to one-year-old).

Hawks eat between 12% and 15% of their body weight on average per day. However, they may only feed every one to three days, depending on their size, and the size of their prey.

Most hawks fly out to hunt at dusk or dawn, as it’s cooler around this time of day. During cold days, they may hunt during the middle of the day.